In his new book, Don’t Be a Jerk, radical writer Brad Warner offers an update of Dogen’s Shobogenzo, “a very long, very old book.” He’ll be discussing Don’t Be a Jerk at City Center on April 8; in the meantime, he explains why he thinks Dogen was a punk-rock Buddhist. 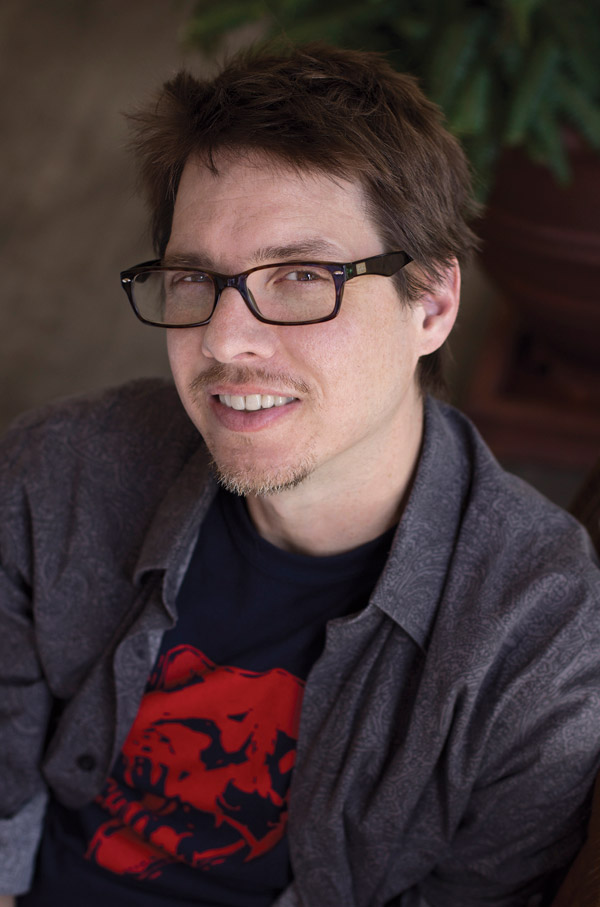 What is The Sh?b?genz?: The True Treasury of the Dharma Eye and why did you decide to paraphrase it for a modern audience?

Sh?b?genz? is a very long, very old book by a Japanese philosopher/monk named D?gen. It was written 800 years ago and then largely forgotten. Its existence was known, but very few people read it. It was rediscovered by Japanese philosophy professors in the late 19th century and has since become widely regarded as one of the world’s great philosophical classics. And still hardly anyone ever reads it!

I think it’s an important book. But unfortunately translating D?gen is extremely difficult. In the words of K?sen Nishiyama and John Stevens, who produced the first complete English edition of Sh?b?genz?, “a literal translation is almost totally incomprehensible and even a semi-literal one produces a mutant brand of English that alternately confounds and amuses the reader.” Books that try to explain D?gen’s work are all too often written in the kind of deliberately difficult academic language that makes it very hard for anyone without advanced degrees to understand. D?gen was not writing for audiences full of stuffy intellectuals. He wrote for ordinary people of his time. What I’m trying to do with Don’t Be a Jerk is to make D?gen’s work accessible again, but for a very different kind of audience, one D?gen himself couldn’t possibly have imagined would be interested in him.

I don’t feel like I’m the world’s greatest D?gen scholar. But I have studied him for a very long time and I feel like I’ve learned a lot. I’m trying to express what I’ve learned from D?gen in a way that’s easy to understand without sacrificing the depth of the original material.

I also think it’s very timely. I don’t think audiences 800 years ago could have understood D?gen as well as contemporary audiences. What he said was very far ahead of its time. It still is!

The Sh?b?genz? was written by a Japanese monk named Eihei D?gen. What’s his story in a nutshell?

D?gen was born in the year 1200 as the illegitimate son of a Japanese aristocrat and his mistress. By the time he was just eight years old, both of his parents had died. This tragedy led him to enter monastic Buddhist practice when he was 12. He wasn’t satisfied with the Buddhism that was available in Japan at the time. So he traveled to China, which was then the most advanced nation in the world. There he found what he felt was a purer form of Buddhism, closer to the original practice begun in India around 500 BCE. He brought this style of Buddhism back to Japan in 1227 when he was 27 years old and established a temple. He died in 1254, at age 54, but he left behind a rich legacy of written work.

While it’s sad that he died so young, it also makes his work very interesting. Most of the written material we have about Buddhism was created by people who were much older when they started writing than D?gen was when he died. So D?gen’s work gives us a rare insight into the mind of a very serious practitioner who was also quite young when he wrote. His writing is much more energetic and stimulating than most other Buddhist writings because of this. He comes across in his writings like a very wise man, but also like a bit of a hot head. He’s very passionate about what he’s writing in a way that an older person wouldn’t be. He’s absolutely forthright in his opinions and extremely challenging to the status quo. He does not suffer fools kindly. He’s very in your face. D?gen is like a punk rock Buddhist. 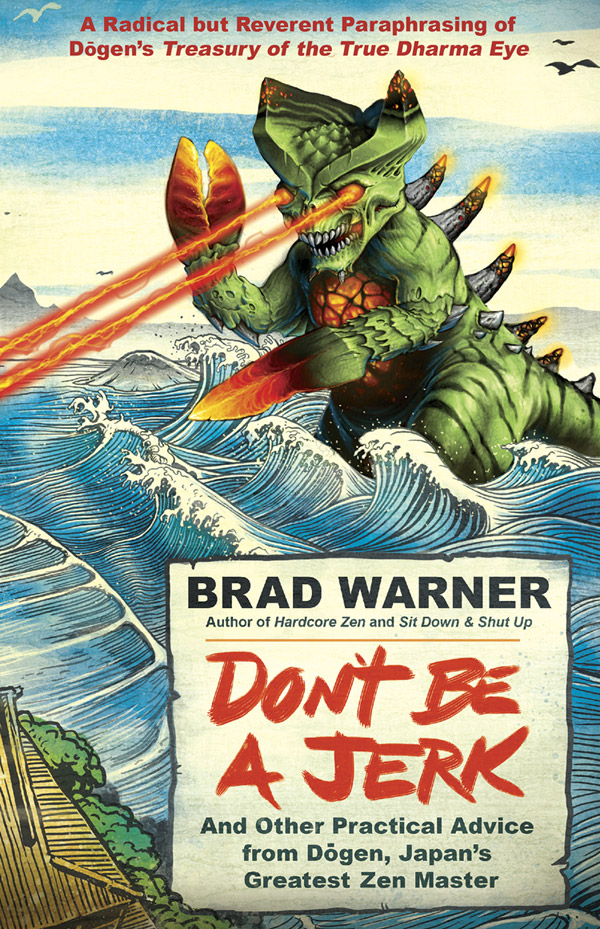 How did you come up with the title Don’t Be a Jerk?

One of D?gen’s essays in Sh?b?genz? is called Shoaku Makusa. This means “Avoid Doing Wrong.” This simple instruction, he says, is the very heart of all Buddhist teaching. In this book, I have tried to paraphrase D?gen in the way people talk now. So I retitled that essay “Don’t Be a Jerk” because I think that’s a valid way of saying the same thing. I thought this idea was so crucial I decided it ought to be the title of the book.

What is zazen and why is it important?  How does it different from other forms of meditation?

Zazen isthe  Japanese name for the essential practice of Buddhism. It goes by other names in other cultures. Zazen is often referred to as a kind of meditation. But it’s different from other forms of meditation in that it has no goal. For example, Mindfulness Meditation is trendy these days. The goal of that style of meditation is to become more mindful. In zazen, mindfulness is considered to be a useful side-effect, but it isn’t the goal. If you don’t become more mindful through doing zazen, that doesn’t mean you are doing it wrong.

This idea of goal-less-ness is probably the hardest aspect of zazen to really understand. We are used to every activity we do having some kind of goal. But that may be the very root of why we are so frustrated in life, because our goals are always in the future. Even when we achieve a certain goal, the first thing we do is look around for the next goal. There’s a lot of stress if you live that way, and most of us do. So learning to be without any goals at all can be incredibly freeing.

The chapter titles in Don’t Be a Jerk are fascinating. What does “Note to Self: There is No Self” mean?

It’s a paradox. One of the most difficult aspects of Buddhist philosophy is the idea that there is no self, that selfhood is an illusion. Every other philosophy and religion I know of takes the existence of a self as granted and builds from there. In Christianity, for example, you have the idea of the soul, which is the immutable self that can even survive the death of the body. Hindus have a similar idea when they talk about the atman.

Buddhism says that there is no self. This seems absurd to us. Descartes said, “I think therefore I am.” We know we have a self because we experience it all the time. You must have self! Who else could be reading this Q and A?

D?gen doesn’t say that what we call “self” does not exist but that calling it “self” is the wrong way to understand it. This is a subtle distinction, but it’s important. It’s why D?gen, a great believer in the idea of no-self, often writes in terms of self. He’s trying to get us to look more clearly at that which we call “self” in order to get a better idea what it actually is and what it is not.

What about “You’re Already Enlightened, but You’re Not”?

Another paradox! One of the most frustrating aspects of D?gen is his use of contradictions. Early translators didn’t know how to deal with this. Some of them seemed to think D?gen’s contradictions were mistakes and they went so far as to rewrite him so that he wasn’t contradicting himself.

But D?gen’s contradictory writings are quite deliberate. He recognizes that in real life things are often one way and exactly the opposite way at the same time.

After D?gen died, his successors continued to teach and practice in the temple he established. Soon some of them established other temples. After a few hundred years the style of Buddhism D?gen brought back from China, which was called Soto, became the most popular form of Buddhism in Japan. An organization called Soto-shu was established. It grew into a very large, powerful religious institution, much like the Holy Roman Catholic Church.

In the 1700s the Soto-shu came to believe they needed to have a monopoly on D?gen’s teachings. So they petitioned the Japanese government to ban the printing and distribution of Shobogenzo. That way they were the only ones who had copies and therefore be the only ones who could tell people what the book said. They were a lot like the Catholic Church in that regard as well. Thankfully that restriction ended and now anyone can read Shobogenzo.

One of your chapters is called “Was D?gen the First Buddhist Feminist?”  So was he and why?

I think he was.

D?gen was a firm believer in sexual equality. One of his essays makes that abundantly clear. In fact I had to cut that particular essay down considerably because he repeats the idea over and over until a modern reader ends up saying, “Enough already! I get it!” But given that he was writing in the 1200s in Japan, he probably had to bludgeon his audiences with the idea since it would have seemed absurd to them.

His society was steeped in the idea that women were inferior beings to men. There were supposedly sacred places that Buddhist nuns were forbidden to go because they were women but that any man, even if he was not a monk, was allowed to visit. That idea really pissed D?gen off and he says so in no uncertain terms.

There was also an idea that a good Buddhist monk should never so much as look at a woman lest he be tempted to do something immoral. D?gen says, “If whatever might become the object of lust should be hated, then all men should be hated too.”

What do you most hope people will take away from Don’t Be a Jerk?

I never know how to answer that question. People always ask authors what they want readers to take away from their books. But I don’t have any agenda like that. I write because I enjoy writing. I mostly hope others will enjoy reading what I enjoyed writing.

I’ve been studying D?gen and doing the practices he recommends for around thirty years now, which is most of my life. I find his philosophical insights to be unique and extremely practical.

This book is about what D?gen has meant to me. Maybe after reading Don’t Be a Jerk, readers can look at some of the more standard translations of D?gen and not be so intimidated by how ancient and foreign it is. Maybe they’ll be able to apply D?gen’s timeless insights to their own lives here and now.

Brad Warner will be reading from Don’t Be a Jerk on April 8 at 7:30 pm in the City Center dining room.