February 16, 2016
Memories of a Beloved Tea Teacher, by Mary Watson
For Mitsu Suzuki Sensei | In Memoriam 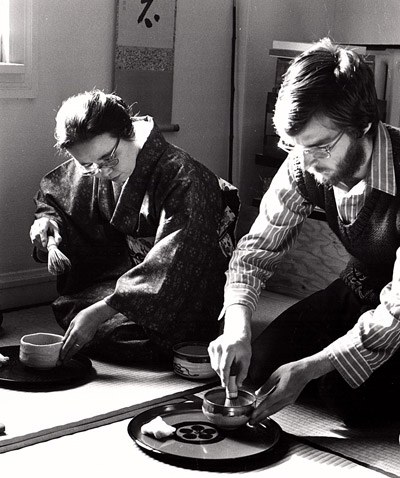 Mitsu Suzuki Sensei teaches a student how to whisk matcha

My first encounter with Mrs. Suzuki (Okusan)—and with Zen Center—was when a friend wanted to show me Tassajara, and we arrived in the middle of Suzuki Roshi’s memorial service at his ashes site. There was a small Japanese woman who was crying and crying. Little did I know then how important she was to become to me.

When I began to study Japanese tea ceremony with Okusan in 1977, I didn’t realize that she hadn’t been a tea teacher for so long. She was learning how to do that, as we were learning this terribly complex form of mindfulness called chanoyu, in the Omotosenke way (that being one of the schools of tea ceremony).

I remember her saying, “You Americans do everything backwards.” We turned the bowl the wrong way, squeezed out the cleaning cloth the wrong way, and we just had trouble with basics like sitting seiza on our knees. I forgot a pencil to take notes for my second lesson. Whatever she said, I never did that again. Okusan took extensive notes and I still have mine from the Seventies, and I use them, as I have continued with this amazing ceremonial form. However, for a time at Zen Center, it was not felt right to take notes, but just to remember everything spontaneously.

For many years, I was tea partners with Tom Girodot, Heiki-san. In the early years, Okusan would always make an offering in front of Suzuki Roshi’s  picture and say something to him. This was on top of a bureau which was in the tea room. We never had the proper sliding doors, so we imagined them and pulled and pushed in various ways—often “backwards.”

I had a feeling that if I thought of something else (other than what I was doing), Okusan would know and clear her throat and I’d come back to, say, entering a tea room. She would not let us get away with any wrong moves.

There were certain times the headmaster of the Omotosenke school would come to San Francisco. We would be selected to perform for him. At one such event, just as I was about to enter to make the tea, Okusan was adjusting my hair. I went on to drop the water ladle onto the tatami as I was walking in. I had to go back and wash it. I’ve rarely been so embarrassed. This sort of mistake reflects on your teacher. However, as we were “backward” Americans, it might have been a bit more forgivable.

Okusan came to my marriage with Jack Weller, a student of Suzuki Roshi. I also made memorial tea with Okusan after my father died. And I was studying with her when I was pregnant (but not due for six weeks), and felt “gas pains”—which was our son, Daniel, deciding to come out early on that day. She loved babies and children, including our Daniel, and would hug and cuddle them. She came to the children’s tea we then had every month and introduced the children to making an offering of the sound of the bell.

Our tea group would go out to dinner in Japantown after a special tea gathering. After a bit of sake, I remember Okusan starting to sing songs that she used to teach her kindergarten class. We would try to join in. She loved to sing. She loved people and loved telling stories.

It was an honor to be invited to have tea in her small kitchen. She knew everything that went on at Zen Center and was a mother to us all. Especially, she had opinions about the right behavior of priest’s wives and priests—which differed a bit from the prevailing San Francisco culture of the Seventies and Eighties.

I remember that Okusan had certain days for certain events. Tuesday was tea teaching day, another was for going to Japantown, and another for cleaning, etc. Every so often I would be honored to drive her to an appointment, and I remember doing a special car cleaning first.

After Okusan had an operation, I remember her walking up and down the Zen Center hallways and on the roof. She loved to walk, and in Shizuoka where she lived with her daughter. When Jack and I visited and she was in her 90s; she took us on a walk past an elementary school and many neighbors with whom she had become friends. We went down to the sea and back along a river—not a short walk.

I am honored to have studied tea with Suzuki Sensei for the 16 years I did. She was such an inspiration and a vital spark for so many people. May we carry her spirit with us.