This year the abbatial leaders focused on the power of fire in their year-end message, encouraging us to be careful with fire in order to promote its benefits and mitigate harmful effects. On New Year’s Eve, our tradition at both City Center and Green Gulch includes a bonfire, which is tended carefully after midnight.

Below, Central Abbess Eijun Linda Cutts offers another useful perspective on fire for this time of year: 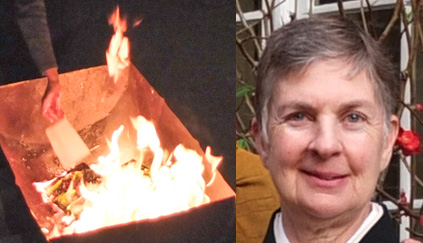 I was remembering growing up in a house that had a fireplace in it in Minnesota, and in the winter we’d have a fire in the fireplace. I could just sit by the fire and just watch the fire, for hours really. Watching the flames, watching them moving and changing colors–there’s greens and blues and yellows and sounds and different shapes. In that same way I thought: oh, that’s just sitting steadfast, watching, not ignoring, completely being present with our life and all those movements.

When we say follow the breath, or unify body, breath and mind, it’s not a rigid sort of stuckness; it’s unifying in movement, in stillness and movement (there’s movement in stillness). And when you do kinhin: stillness in movement, or walking throughout the day. So while we’re sitting immovably, to notice all the movement that’s there, in the immovability. And following the breath: it’s staying with movement, wherever you feel it.