When we first began experimenting with an online zendo, we wondered how it would feel to sit zazen in digital time-space. One of the first surprises was discovering how similar sitting together via a videoconferencing app was to sitting together in the meditation hall. Many group members have spoken about the sense of connection we feel and our deepening commitment to show up and support each other’s practice. 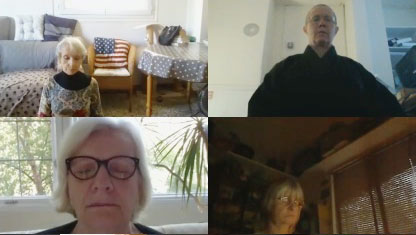 Click on the video at the bottom of the page to experience a few minutes of sitting with the Sangha Project. Let the video be your open-eyed meditation timer (there’s nothing distracting to watch here!) and give yourself a few still moments. It’s just under 4 minutes.

The participants who join the sittings (Monday through Friday) use a wide range of devices—desktop and laptop computers, tablets or smartphones. Some people sit at a desk facing a monitor. Others place their device five or six feet away from where they sit. Once summer arrived, one person brought their phone outside to sit among the trees. Some of us position our phone or tablet to face our altars. Then there is the question: what do you do before you sit down to meditate with the group? Last month, one sitter said she settles herself by mindfully brushing her teeth.

Just as we do in the off-line zendo, the group signals the beginning and ending of the meditation period using bells. Initially the group leader was the one who sounded the bells every day. In the spring, several participants took on the commitment to be a regular doan (or bell ringer), and each communicates with other group members to find a replacement when they will be away. This is a wonderful expression of the group’s growing commitment.

As the group has grown, the form of our morning zazen has also expanded. When one member of the group asked to chant the Robe Chant (usually chanted at the end of morning zazen), we gave it some thought and decided to chant it once in English. We’re looking into whether our videoconferencing software will allow us to chant in unison without distortion.

As the group has widened to include more people who live outside of the US Pacific Time Zone, we’ve worked together to handle late arrivals or early departures. Traditionally the recommendation for entering late is to walk slowly and quietly. But what does that mean when the zendo is virtual? This points to another issue that has come up for group members. How do we practice with sound? Some have found it difficult to meditate in the midst of sounds from their fellow sitters’ households. In response to both issues, we’ve begun asking everyone—except the doan—to mute their microphone. At the same time, we’re paying attention to how the mind leans in or turns away from sounds depending upon whether we “like,” “dislike” or feel neutral about them.

The online zendo is an ongoing exploration of how to think “not thinking” using the very same technology that too often distracts us. It has also provided the participants with an unexpectedly powerful experience of sangha. If you would like to learn more about the online zendo, you can contact us at sanghaproject@sfzc.org.