The main point of meditation is the same for all humans: to rest in the ultimate, and to experience the connection between ultimate and conditioned existence, in the present moment. To do this, we sit in an upright, aligned way, one with the universe by nature of being composed of its elements, naturally receiving it in and offering it out through the process of normal breathing. 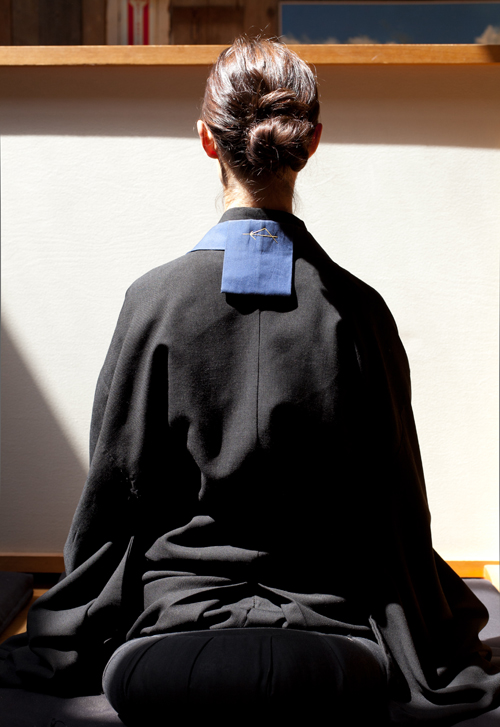 So begins an article by Shosan Victoria Austin titled “The Seated Meditation Pose for a Woman’s Life,” from the anthology Seeds of Virtue, Seeds of Change: A Collection of Zen Teachings, edited by Jikyo Cheryl Wolfer and released last year. Starting from this universal perspective, Shosan lays the ground for reexamining postural prescriptions in Zen practice, traditionally handed down from a male perspective. She then proposes modifications that may be more appropriate for women at different phases of life.

Shosan states (from later in the article):

Though the basic concept of upright, alert repose in the meditation posture is the same throughout life, the specifics vary: seated or reclining, leg position, sitting height, and the need for and type of support. For insight to be possible, a woman’s meditation posture must be stable and nourishing. According to the Buddha’s teachings of nourishment, not only the physical body must be nourished, but also the woman’s senses, intention, and consciousness. Due to the physical and physiological changes, how a woman meditator nourishes herself in these four important ways, varies throughout the course of her life.

Both a transmitted Zen teacher and Iyengar yoga teacher, Shosan offers her expertise from the intersection of these traditions throughout the varied facets of her teaching at San Francisco Zen Center. One specific outlet is Meditation Posture Fridays: Yoga Practices for Sitters™, which she leads every month (next on Friday, September 18) in a postural clinic-type format, open to anyone. More about this regular workshop and Shosan’s approach is available in this interview (not specific to women): The Yoga of Meditation Posture: Shosan Victoria Austin on Yoga Practices for Sitters.

Of course Shosan also offers yoga classes, often as part of a series during practice periods at City Center. You do not need to participate in the practice period to register for the classes. Her next class series, Daily Yoga Practices for Sitters, begins October 7 and runs seven weeks through November 18.

You can read the complete article quoted above, “The Seated Meditation Pose for a Woman’s Life,” in Seeds of Virtue, Seeds of Change, which is available in both the City Center library and bookstore. The anthology, published in 2014 by Temple Ground Press, also contains wonderful articles from SFZC alumni such as Setsuan Gaelyn Godwin, Daijaku Kinst, Shinshu Roberts and others, including SFZC’s central abbess, Eijun Linda Ruth Cutts.