Recently San Francisco Zen Center received a significant bequest from a couple in Monterey, California, who were inspired to remember Zen Center in their will primarily because of their relationship with Katherine Thanas. 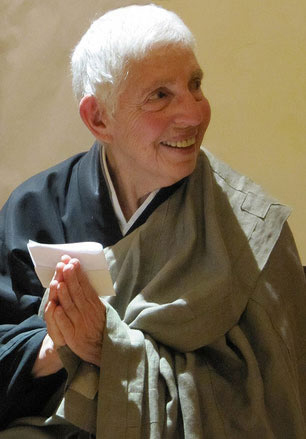 Sobun Katherine Thanas was a Zen Center priest who began practicing in 1967 at Sokoji with Suzuki Roshi and was ordained by Richard Baker in 1975. She founded the Monterey Bay Zen Center in 1988 and became head teacher of the Santa Cruz Zen Center in 1989, where she lived and taught until her death in 2012. Here is how one of the donors expressed his intention:

My connection to Buddhist thought began for me in LA in the early ’80s. It deepened when a couple of years later at Tassajara I met Katherine Thanas. We got to be close friends over the years, parting only with her death in June 2012. It was that connection with Katherine that initiated me into creating the Charitable Remainder Trust. She was such a light that I felt compelled to give back.

I am delighted that this bequest will be in honor of Katherine’s significant presence in the lives of so many. I am deeply grateful for being able to honor her in this way.