Words from the Wearers
Article by Kogan Sheldon

â€œWhatâ€™s that bib youâ€™re wearing?â€ â€œThis,â€ the wearer says, â€œis my rakusu.â€ Some of us are humorous, some shy or very reverent, some proud or patient, or all of those thingsâ€”as we show others the many finely stitched panels of the rakusu, our â€œBuddha bib.â€ Usually admiration follows, accompanied by an examination of the back of this miniature representation of the robe that Shakyamuni wore. Here the personâ€™s teacher has done calligraphy, perhaps some art as well, and has written the vow-takerâ€™s Dharma name on the white silk facing. A poem may be there, or a koan (teaching challenge). 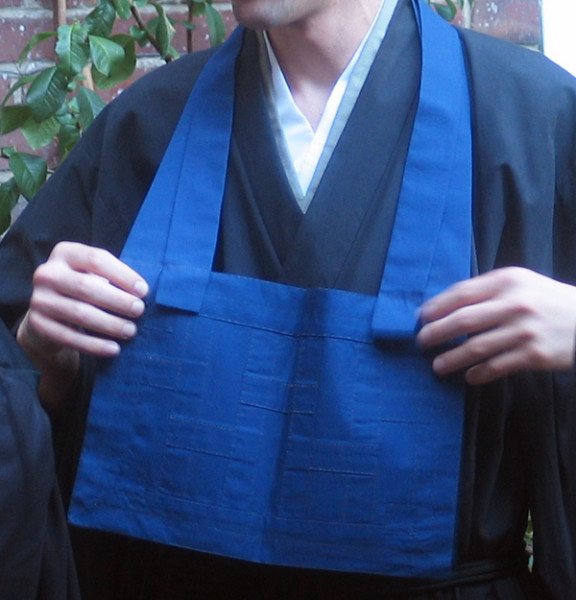 A student who enters the Soto Zen lineage of Shunryu Suzuki Roshi must undertake the remarkable endeavor of sewing a rakusu, which will be worn during zazen, practice discussions, lectures and other Dharma activities. Sewing begins with permission from the student’s teacher. Once complete, the work is surrendered to the teacher, to be bestowed on the student in a ceremony called Jukai. Anyone who has an established practice and would like to sew, but has not received permission, may discuss the matter with one of the Zen Center teachers, who are available for guidance and Dharma instruction leading to lay ordination.

At first I used my conditional upbringing as an American man. Sewing? Really? . . . After the initial resistance, I really fell into the process. It was amazing to see my emotions play out in each row of stitching. Looking back at my stitches, I could tell . . . I learned that giving myself room and having patience makes for a clearer mind, allowing my heart and actions to feel more on the same wave length. Before, pushing through and efficiency were top priorities. The further and further I got along, there was increasing appreciation, wonderment, gratitude and satisfaction as I realized the significance and history of what was being sewnâ€”this “robe of Buddha.” Wearing it . . . has truly changed my life. The second I put it on I was able to somatically experience myself in a different way. There is space for the person I am now and now and now . . . and now. I also have the ability to forgive myself more. Every day when I put on the rakusu I am reminded who I am allowed to be, who my teacher sees when I arrive, and the vow I made to all beings. 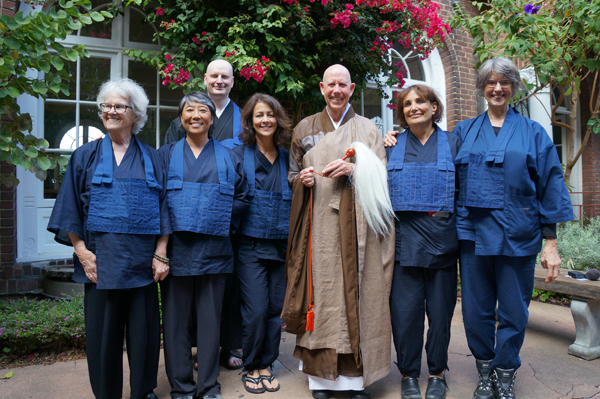 The task of sewing has an unforgettable impact on those who take it up. Kristopher Thomson, an active City Center volunteer and member, said this when interviewed the week before his jukai ceremony, which was this past Saturday:

For me the sewing of a rakusu was a lovely experience. I’ve not had a lot of experience sewing anything beforeâ€”so it gave me a small container in which to experience frustration, impatience and discomfortâ€”pricked fingers and an aching back were consistent companions. In the end, more than anything else, it gave me a chance to experience a supportive community, deep satisfaction in my own work and letting go of all the impatience and perfectionist thought. To practice acceptance of what is. My rakusu is me, imperfections and allâ€”and that’s OK. A powerful teaching. The Zen Center sewing teachers make rakusu sewing instructions available on the main website. These sewing instructions are intended to be used in conjunction with instruction from a qualified sewing teacher, as it is almost impossible to describe the construction of the rakusu just through words. The teachers do not recommend attempting to sew a rakusu solely by relying on these written instructions. Consultation includes discussion of appropriate fabric and thread, and the measuring, cutting, piecing and stitching. Strap measurements are tailored to the individual. The tradition of sewing that has been passed down to us includes various preferred methods, which are all valid. The sewing teacher helps with all these questions and technical difficulties.

Sewing practice began at SFZC under the tutelage of Yoshida Roshi in 1970 and continued with Joshin-san from 1973 to 1975. Later, Mitsu Suzuki, the wife of Shunryu Suzuki Roshi, taught us how to make other monastic garments such as juban and hippari. Zenkei Blanche Hartman has carried on the teaching of sewing Buddha’s Robe at SFZC from these teachers. Each sewing class begins with a brief service, and Buddhaâ€™s aid is invoked with each stitch (â€œNamu Kie Butsuâ€). It is a great adventure!

Dawn Moore, a long-time practitioner and volunteer at City Center, said, â€œThe camaraderie of sewing and then wearing the rakusu is great, especially when sitting with the dying, or the sangha.â€ But Dawn travels a lot between the temple, her work and school. â€œLosing the rakusu is a worry, so itâ€™s often left at home.â€ Losing a precious rakusu would mean beginning the sewing process again.

Not that sewing is unrewarding in itself! Many people continue with sewing on rakusus, rakusu envelopes, or items for newly ordaining priests, since Robes may also be sewn as gifts for others who have already received the Precepts. The dedicated practice of sewing is part of our lineage. 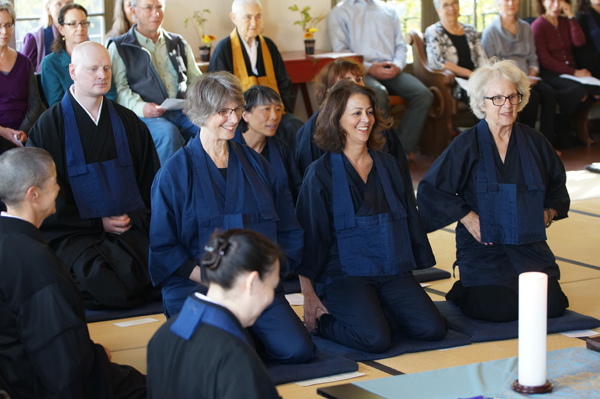 It also connected me to my mom, who is still alive, Japanese, and enjoys sewingâ€”especially needlepoint and Japanese embroidery.

I received my rakusu from Tova [Green] and Linda Ruth [Cutts]. The poem says in Japanese, â€œSitting, Standing, Walking, Lying down.â€ I consider my rakusu my cloak of compassion. It gives me strength, a reminder, and I have it with me during all my waking hours whether Iâ€™m wearing it or not. 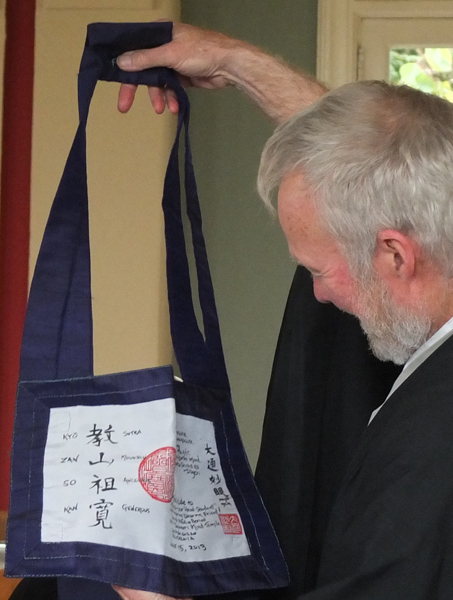 While appreciating the comments given above, it is important to remember that holding the precepts is hard workâ€”life in the closer or the wider sanghas of this world is no bed of lotus petals. Among those interviewed for this article was one student whose remarks reflected day-to-day frustration. Still, the student wears the rakusu with commitment. What is never far from the high of taking the vows is the difficulty of keeping the Precepts and the disappointment of falling short, either in ourselves or in fellow sangha members.

Brent Haas, a busy professional who frequently resides at City Center for periods of more intensive practice, was given permission to sew his rakusu in 2010. A six-month Precepts Class followed, and sewing. He celebrated his Jukai at City Center in 2013, formally receiving the Bodhisattva Precepts at that time. Since Brent is from Ohio, Iâ€™ll quote an article from the Toledo Blade describing a Jukai held at Toledo Zen Centerâ€”a wider-public perception of the precepts:

[They] include such vows as being satisfied with what one has, listening and speaking from the heart, speaking what one perceives to be the truth without blame or guilt, and unconditionally accepting what each moment has to offer.

Together with saving all beings and entering all dharma gates, these give us a â€œmapâ€ for the Buddha Way, which we vow to take up, or â€œbecome,â€ when we receive Jukai.

Brent had one word to express his experience of sewing, studying, and wearing the rakusu: â€œResponsibility.â€