I often look up from my desk at a drawing, rendered in almost photographic realism, of Suzuki Roshi. It was sent to me by one of my prison pen pals. Armando is on death row in San Quentin, and we’ve been corresponding for several years now. 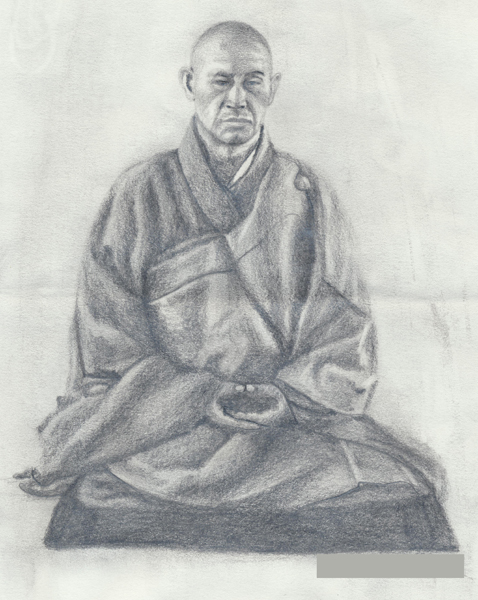 It is hard to imagine the man who writes to me of his meditation practice, with his searching questions about the dharma, as the same person who committed the crime that landed him in prison. He is and he isn’t. I’m reminded of the story of Angulimala from the Pali Canon, the earliest collection of Buddhist scripture. Angulimala was a mass murderer who was converted by the Buddha and became an arhat. This story speaks of the transformative power of Buddhist teaching and practice. If I want to consider myself a follower of the Way, I must believe—for myself as much as for others—in this possibility of positive change.

At Zen Center we receive an average of over 40 letters a month from prisoners. This works out to about 2,400 in the approximately five years I’ve been responsible for the program. (This number does not include letters from prisoners who already have pen pals through our program and send them to us to be forwarded. These average about 70 a month.) They write from all over the country and have heard about Zen Center in a variety of ways: word of mouth, through prison publications or through other Buddhist magazines and newsletters. Some are requesting books or basic meditation instruction. Some don’t really know what we offer and are simply reaching out, hoping that someone will reply. Some of the inmates who write to us have an established Buddhist practice; a few are lucky enough to belong to a prison sangha. There are many who write describing themselves as the only Buddhists in their facilities. Some know almost nothing about Buddhism, but have heard that it may be a way to some peace. 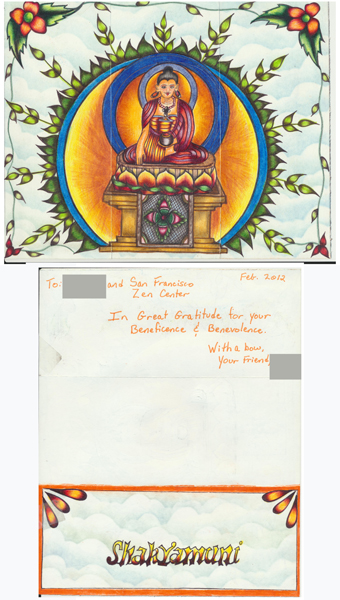 Every person who writes to Zen Center receives a personal response. Typically these letters will include a couple of articles about prison practice and basic meditation instruction. We are also able, through the generosity of our donors, to send books at no cost to the prisoner. As outreach coordinator, responding to each of these letters, I glimpse the stories behind them—some inspiring, many heartrending. Always, though, I have been grateful for the opportunity to connect, however tenuously, with these men and women who often have no one else.

The prison outreach program is dependent upon volunteers, for both correspondence and for income. Our entire funding comes from the two book sales we offer each year. Money from these sales supports other Zen Center programs as well, including our meal offerings for homeless people.

We also coordinate the mail-forwarding and provide books for the Gay Buddhist Pen Pals, who reach out specifically to incarcerated members of the LGBT community.

We are able, with very limited means, to do a lot, and we invite you to help us. There are several ways to do so:

Finally, I’d like to include the voices of others who have been as inspired by the correspondence program as I have. Below are few words from some of the volunteers who have been pen pals for a while.

Through the prison pen pal program I have found inspiration and motivation from an unexpected place. Sharing this practice with another person living in a situation I can’t imagine lends unique perspective to my own life and challenges in following the way.

Rob and I were dharma pen pals for ten years while he moved about through the Florida prison system. We “accompanied” each other through the usual ups and downs of life – his on the inside, mine as a free worlder. We had a lot of “conversations,” about the books I sent, the challenges of following a spiritual path in prison and out, politics, relationships, his plans for what he would do when he got out. He died about a year after he was released. He was a good friend and a blessing in my life. However worried or anxious I might be feeling about the world in a given moment, I knew I could always do at least one unqualified good thing – write a letter that would be there for him at mail call. 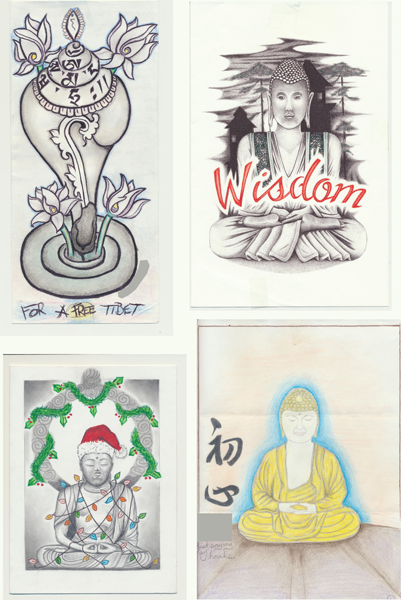 I have been writing a gentleman inmate in Arkansas for a couple of years. He has sent me things, little pamphlets on spirituality, a clipping from a newspaper, a few words; it has amazed me at the timing of some of his letters, his words have freed my mind from time to time, and I often think, who is this guy? So wise, and so human like myself, apt to make mistakes, and his were no worse than mine, he is just doing time, I guess we are all doing time, just different kinds. He is my confidant, I can tell him just about anything, and he me, I think, but do we ever really know for sure? I guess that’s why we keep writing, expressing, testing and trusting. One day I may go for a visit, but I don’t think that’s necessary, the flight of ideas are shared through lines, scribbles and strings of thought, entwined and then unwound, round and round we all go, to where? We don’t yet know, but until then, the postbox is where I’ll go.

Amidst the clutter of my life that makes its way to the refrigerator,
there is a handmade card, “Happy 8 year anniversary”. It is from my dharma buddy & pen pal, Edward.
Every time I notice it I smile.

Zazen holds, for me, an essential spaciousness; stepping into a cool, flowing stream there is the reminder of something larger than my own life.
This writing practice is a bit like that.

The prayers, shared readings, bad jokes, and examples of fierce courage and compassion stop me short and keep me “right-sized”.
But it is the simple, steady act of writing, heart to heart, meeting in buddhadharma and shared humanity,
that is a shining gift.

To have a Dharma friend. To mutually share Dharma openly and directly as it resonates in both of our lives. To pause, reflect and share with a sense of presence, responsibility, authenticity and humor. To support another’s life and to be supported by another unconditionally. To experience this connection with someone far away, whom I’ll never see. For me actualizes the effect of our connection to each other and to all beings. It is a great reward.