August 19, 2014
Laying a Roof and Raising Consciousness: An Interview with Contractor Ezra Wynn on Being Atop the Guest House
Farm & Garden | Features

Among the many large-scale improvement projects at Green Gulch Farm this summer, the re-roofing of the lovely Lindisfarne Guest House was notable as much for the extreme complexity and tediousness of the job as for the uplifting inner effects of the experience as reported by some of the visiting workers. The uniquely shaped roof was beautifully completed in early July, thanks to the amazing craftsmanship of contractor Ezra Wynn. 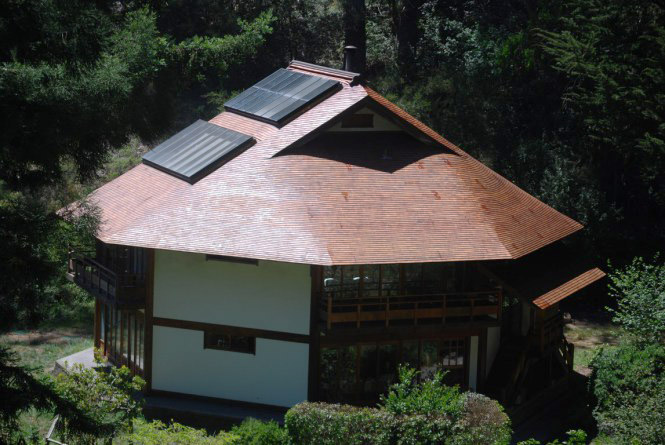 The Lindisfarne Guest House is a distinctive example of a traditional Japanese style of architecture that avoids the use of nails. Twelve rooms open onto a skylit atrium in one direction, and landscaped and wooded grounds in the other. This summer the repair work involved replacing all the shingles, along with the chimney and the flashing around the windows. The two-story octagonal structure was built in the 1970s with a crew of Zen students led by Paul Discoe, a disciple of Suzuki Roshi who had studied traditional temple carpentry in Japan. The workers took their time as they diligently followed the Zen Center schedule, devoting significant time each day to zazen (rising at 3 am, to bed at 9 pm). (Photo: Sara Tashker)

In the interview below recorded by Green Gulch resident Lauren Dito, Ezra explains what is so unusual—and challenging—about the architecture, while also reflecting deeply on some of the non-material rewards of having spent time on the property.

After being closed for much of the summer, the guest house reopens fully for stays in just two weeks, beginning September 4. Guests are warmly invited to book a stay under the beautiful new roof and enjoy the charm of the architecture and grounds at Green Gulch Farm.

Is there something particularly enjoyable for you about this kind of architecture?

Oh yeah, it is kind of like the Path. You get into it and it looks doable, and then you find out it’s really hard. Then at some point you surrender to the flow and enjoy the space. I have been a meditator for most of my life, so I enjoy the energy here. Early construction photos (1970s). As reported by original builder Paul Discoe in the book Zen Architecture: The Building Process as Practice: “We foolishly decided to blend the roof plans from octagonal to round. This turned out to be much more difficult than we imagined. Many mistakes later, we found out how to precut the shingles in the shop and make curved templates to align the courses. Years later this study was useful in other projects. … In the end, the structure became an integrated whole that could be felt as one pattern but could not be easily understood.”

I understand you’re also one of the most skilled roofers in the area, with more than 30 years experience. Was this the first Japanese-style roof you have done?

Pretty much. I have done a fair amount of straight ones. This was the first one that went from an octagon to a dome. It is a work of art. I just kind of restored it.

So what did that feel like for you to now come into this project later in its life? And what was challenging about the job?

We have done a lot of wood shingle roofs—all different styles, lot of Victorians, a lot of fancy turrets in different wave patterns, roofs with curved edges. So I looked at this and I thought, yes, we will be able to do this. But as I was taking pictures, before the scaffold was set, I thought, this looks pretty complicated. Sure enough it was incredibly complicated just to figure out how to start it! There are eight facets, and every other one is steeper. So that created a problem, because we had to make the steeper sections blend with the less-steep ones as the octagon gradually became a dome.

Also, the class B fire-treated shingles we chose are very difficult to work with. They are dried out and brittle, and you have to cut them with a saw rather than with your hand. It turned out that all curved shingles had to be cut, every single one. After about five weeks we ran out of money—maybe six weeks we worked with my crew. For about the last month or so I have been here alone trying to get it done. Every estimate I have made turns out to be twice as long as I think it is going to take. 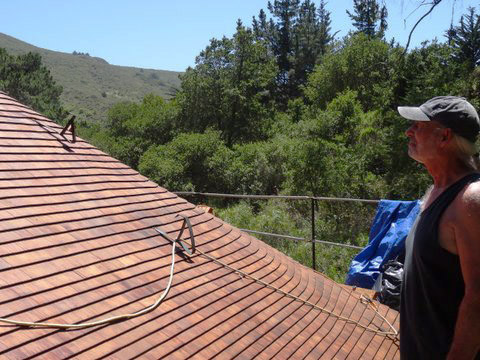 The main thing I realized as I was getting into this job was the amount of dedication and devotion of the original builder. This person was so devoted as to put together this incredibly difficult project and did a beautiful job.

So now you have added another layer of dedication and devotion to this building.

I went through the whole process in my mind: oh my god, what a failure! I am losing my shirt, what a moron … until finally I just accepted it and said, listen, this is the most wonderful place you could possibly work. I am going to be happy here despite myself.

I was determined: I thought, if I am going to do something this demanding and this difficult, if I got to climb up this “mountain” 25 times a day, I want to get something out of it, some expanded consciousness. I want to do some waking up. 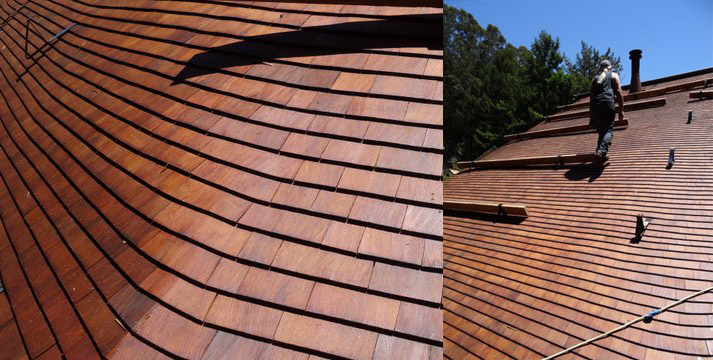 But the roof came out beautiful. I feel really good about it and we did as good a job as we possibly could for greater longevity.

That’s a big challenge for this community because of the proximity to the ocean; everything deteriorates so fast.

I also stained it with a pigmented stain, which Maintenance should do every 5 years and get 50 or 60 years out of this roof, or 100 years if you keep it up.

What would you say about your time here at Green Gulch?

It has been a wonderful blessing for me, and I am very grateful for this opportunity. I have a much greater understanding of Buddhism, doing this here. The crew too—they loved working here. They were sad to go. I would say it is my favorite job I have ever done, and I have done a lot of them. And the last couple of weeks I started eating in the hall with everybody. It is really nice. 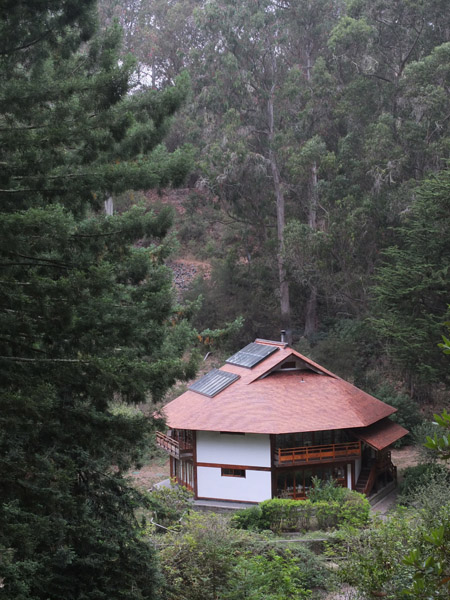 I think it feels really good for the community, too, when they know that there is somebody who has really felt invested and has felt the magic of the place. It just adds one more person to the family. Can you say more about your own spiritual practice?

I do yoga. It is a very mystical type of meditation focusing on the third eye, raising body consciousness. So it is the same place, the same goal [as Zen Buddhism].

What is your feeling—when you see people in their robes, when you hear the bells?

I absolutely love it. To me, this is a guest house but it is really a temple. They built a temple here. I couldn’t have asked for more. It is like a gift. I got to do some growing, and I am a little wiser than I was before.

[Green Gulch later received this statement from Ezra in an email: “What I observed in finishing this project was that my heart was full.  My cup was to capacity. I saw that if a committed group of people live simply and purposefully, and consciously calm their minds, what remains is love, naturally.  I saw the whole place enshrouded in the thickness of it, as tangible as the fog.”]

The summer of construction at Green Gulch is winding down as residents prepare to move back into Cloud Hall, and the Guest House fully reopens on September 4, while other building projects will continue into the fall. Information about guest accommodation options at Green Gulch Farm is available on our website. To book your guest house stay beginning September 4 or later, call 415-383-3134.