August 12, 2014
A Warm and Present History: A Tribute to the Archivists Who Visited City Center
Arts & Culture | Features | News

For the fifth year in a row now, City Center has had the pleasure of hosting a group of students from the Information School of the University of Washington, whose annual visit helps Zen Center organize and safeguard a mountain of records of all kinds from all three temples, one handful at a time. 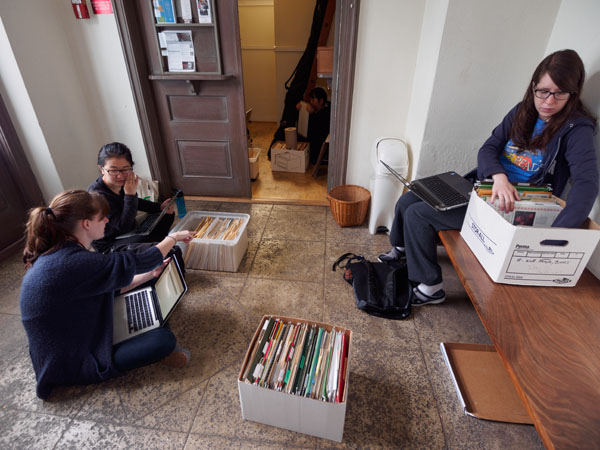 The value of records is not lost on Zen students accustomed to chanting a list of ancestral teachers. We are able to practice Zen thanks to the caretakers who have handed down the lineage from the time of the Buddha to today. Besides the teachers, this continual effort includes the countless people who memorized, sculpted, wrote down or printed the words and images that contain our knowledge of the Dharma and protected these treasures throughout history.

With this article, we gratefully acknowledge the group of students who descended on Zen Center for a few weeks this summer to continue this noble stream of effort.

Development of the Archivist Project A notebook that belonged to Suzuki Roshi, with notes on the translation of interesting terms such as “beatific serenity” and “shimmering insight,” as well as the note “L.S.D.” at the top (perhaps reflecting the times).

For over 50 years, Zen Center has robustly continued the Soto Zen lineage and generated records in the materials of our time: books, audio recordings, photographs and, increasingly, digital media. This heritage accumulated in drawers and closets with loving but variable attention until it became a crisis of physical space in the late 2000s.

Around that time, Joseph Tennis, a professor of information science at the University of Washington in Seattle, was becoming more involved in practice at Zen Center and caught the attention of Dana Velden, then Zen Center’s corporate secretary. Between them, they established a program in 2010 to host graduate students for several weeks each year to organize and conserve the materials. Joe has returned with a fresh crew each summer to continue the work ever since. 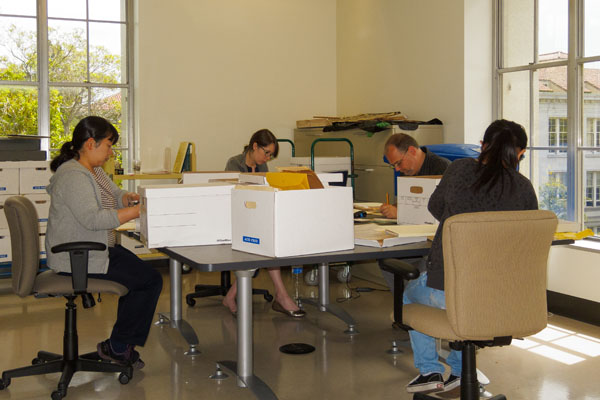 At the Bancroft Library.

To help pave the way for the process to continue this year, in April Joe and the Zen Center board completed a deed of gift with the Bancroft Library at UC Berkeley, who will now be the official custodian of Zen Center records. This major milestone not only ensures that the materials will be well cared for, but also will allow Zen Center to move materials off site as needed in the future. Everything was ready in June, when this year’s group of 10 graduate students was heartily welcomed.

Upon arrival the students dove into their tasks and quickly made a place for themselves in the community. They were kept very busy. 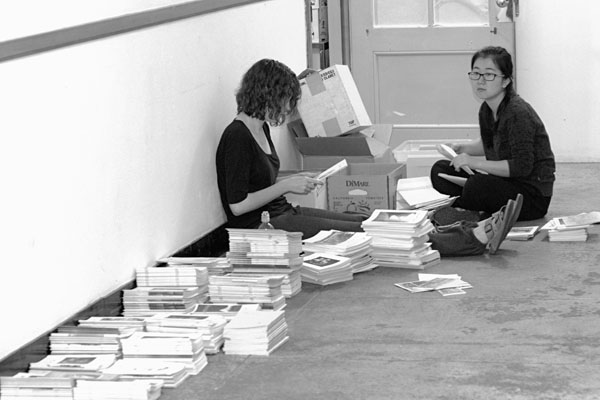 Sorting through copies of Wind Bells.

At City Center they continued discovering materials and developing a detailed preservation plan. They created an inventory of Wind Bell booklets (Zen Center’s periodical published until recent years) to compile nearly a complete set for Bancroft and City Center use. They digitized over 2,250 slides, images and documents, and conducted a “Name-That-Monk Night” to learn and add historical information to a number of images. Toward the end, they prepared materials for transfer to Bancroft including 24 boxes of variously processed documents, maps, blueprints and other papers. They also prepared and sent 19 boxes of audio cassettes to audio engineer Charlie Wilson for restoration and select digitization.

At the Bancroft, the students produced archival descriptions for 16 boxes of materials representing 40 years of history, which makes them more accessible and ultimately searchable. This also ensures that the boxes will remain stored at the library with easy access and not off site with items having less-substantial descriptions. If all goes according to plan, they and future materials will ultimately be on the library’s catalog for anyone to access. In the process of going through all these papers and tapes, the archivists discovered more than a few surprise gems. Among these were personal notebooks of Suzuki Roshi and Mitsu Suzuki, containing vocabulary words like “shimmering insight.” There were dharma talks by luminaries like Alan Ginsberg, the Dalai Lama, and Thich Nhat Hanh. There was also a vinyl record for learning Japanese belonging to a couple in the sangha who were longtime supporters of Zen Center (Art and Hazel Mueller); the record was apparently used to learn enough language to correspond with a teacher in Japan. Even this small detail serves as potent evidence of the frequently warm, personal nature of our tradition.

At a final presentation at City Center, the students thanked the community—”Thank you for letting us dig through your closets”—explaining that this represented a rare opportunity to handle real and important artifacts of history.

As they pursued their official work, the students were also expected to learn about Soto Zen through instruction and experience. Each week Rosalie Curtis, City Center’s tanto (head of practice), conducted a class called Buddhism 101, just for them. The archivists also participated fully in the residents’ schedule with zazen and service each morning. They helped in the kitchen and did other kinds of work practice. They attended a full moon ceremony, took formal oryoki meals and went to dharma talks. They truly were full-fledged Zen students. 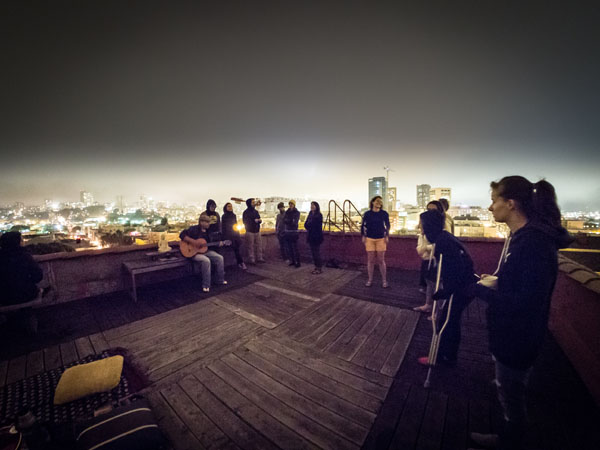 Of course they also mingled and made friends in the community. Many people at City Center shared their interests in things like World Cup soccer, cycling, Internet politics and music, and shared many afternoons with them exploring San Francisco. At work meeting on departure day, nearly all of them expressed sadness, with several suggesting they might return. The feeling was very mutual and they are missed already.

Wherever they go after this experience, their presence and their work itself will be part of the content and shape of the Zen Center story as it continues through coming generations. Our thanks go to them all!

Data reported in this article was gathered largely from a presentation on July 17 by Joe Tennis and the other archivists.

Special thanks to Jesse Stanley who generously allowed us to use some of his photographs for this article. More of his work, including more from SFZC, is available on Jesse’s website.