August 5, 2014
How Leftovers Help Us Reach Out
Features | Volunteering

We don’t just drop off the food; we get to serve and be part of the community in some way.
—Clare Hollander

A spotlight on SFZC outreach and volunteers, by Jay Pennington

It’s 1:00 on Thursday afternoon. Time for leftover magic. As part of City Center’s outreach activities, volunteers convene in the kitchen every Thursday to turn the week’s leftover food into something really useful—to feed those in need. 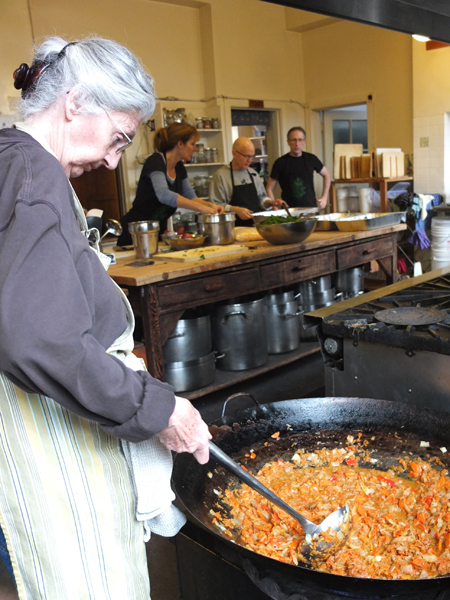 Irene Gianoutsos at the wok, with Clare Hollander, Jeffrey Schneider and Art Clarke
(photo from previous year, by Shundo Haye).

Today’s skeleton crew for the outreach offering includes Outreach Coordinator Jeffrey Schneider and volunteers Clare Hollander, Irene Gianoutsos and myself. After lunch, we gather around the kitchen altar for a brief bow-in and assessment of our materials and possibilities. There is a lot to work with today, though to the untrained eye and palate (it’s my first time today) it might seem too eclectic to make a harmonious meal. This is where the magic comes in.

Jeffrey begins pouring the contents of one large pot into another, and in goes the leftover carrot soup with the leftover curried lentil one. “We tested it before, and it actually works very well together,” he says convincingly. And I believe him. It came out a lovely bright orange color. Then, same with the rice dish; leftover roasted tofu cubes and purple cabbage are mixed in with the brown rice (or was it bulgur and condiments?). Anyway, afterward it all looks like it was meant to be together, and even more so after serving it up in Chinese to-go cartons.

The crew also makes a point to add fresh vegetables when possible, sautéed by Irene, “the wok queen,” and to offer fresh fruit when available. Finally, to fresh lettuce we add slivered carrots for a salad with leftover elements, including peanuts, sliced spiced figs and dressing. There you have it: a new round of rice, soup and salad, just like any lunch at Zen Center, only a little more hearty, and somehow more fun. 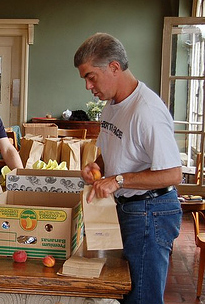 Rob Bullen preparing bag lunches for the homeless (during a previous year).

Zen Center has been involved in feeding the homeless or disadvantaged for many years. Longtime lead volunteer Rob Bullen told me that when he started in 2005, he and two other people would make lentils and rice and head down to the homeless community in the Tenderloin area of San Francisco, riding the city bus. Later, when he was able to offer his own vehicle, food could be handed out from the bed of his truck.

Rob soon found himself leading the food-offering effort, which he continued for several years, and which for some time included a bag-lunch operation one Sunday a month that provided peanut butter and jelly sandwiches along with fruit and protein bars obtained from the local food bank. Fifteen-or-so volunteers worked together in a kind of factory line to pack the lunches. In the Tenderloin, “it wouldn’t take long for them to disappear,” Rob said. He continues to offer his time and energy on the current Thursday operations, for which Jeffrey is grateful, remarking, “Rob’s dedication and generosity has been an inspiration to us all!” 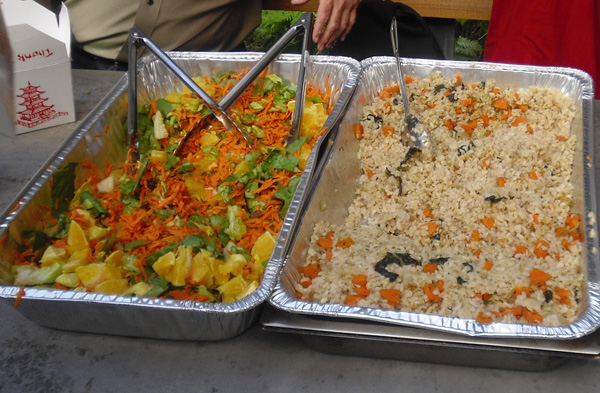 In 2012 City Center turned to its own neighborhood and began taking its leftover magic to a nearby housing facility for formerly homeless people, most of whom have been given dual diagnoses of physical and psychiatric issues, sometimes complicated with substance abuse. At first, as Jeffrey explained to me, many of the residents seemed a little wary of our completely vegetarian offering, but we and our veggies have since become a welcome fixture. In fact the best part of the magic trick is being there to see it all disappear—not to mention connecting with the people. As Clare says, “We don’t just drop off the food; we get to serve and be part of the community in some way.” 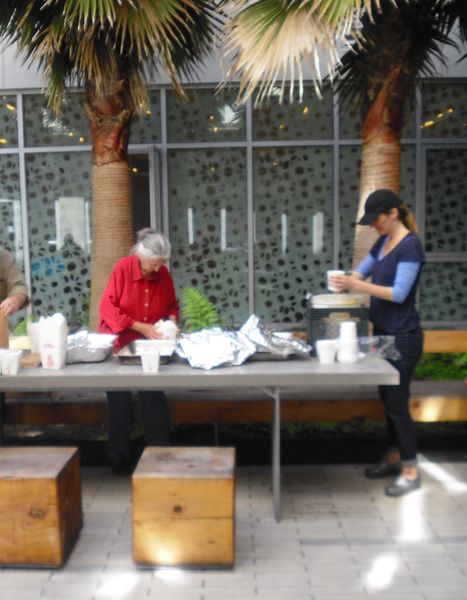 Irene and Clare setting up at the apartments.

The crew usually serves up between 2:00 and 3:00 in the afternoon in the center courtyard of the apartment building, where residents can take each item away in separate to-go containers. Sometimes a line forms, or there’s just a steady stream of takers until the food is gone.

One thing that stands out for me in the experience of serving is the variety in the crowd. Many faces light up as they approach and recognize volunteers, calling them by name. At least one elderly woman pauses to turn and express her sincere appreciation for the regular offering. Some barely mumble anything, while others are chatty. A young mother hangs back to provide a lively update about her son and her successful weight loss. A security guard helps by handing out plastic utensils wrapped in a napkin as people approach. Between polite requests and thanks for the offering, one woman in a wheelchair barks out something about how I would never amount to anything. Duly noting the momentary confusion I was feeling, I could reflect on how it is to just give up taking things personally. Often, of course, it’s not so easy. Today for once—here, in this context—it feels rather easy, and I settle back into the task of serving. 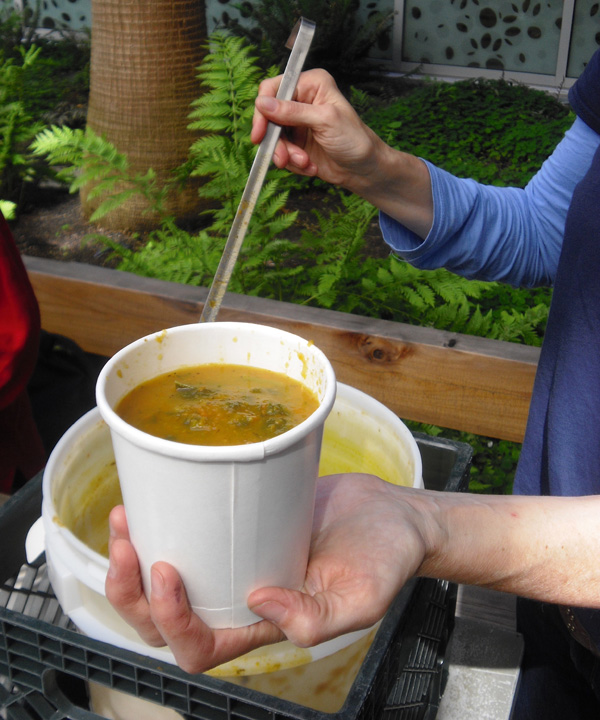 I wonder if this fleeting sense points in some vague way to one of the treasures sought in any volunteer work: the feeling of getting outside of one’s own concerns and contributing to something bigger than the self. Reflecting on his own motivations, Rob later puts it simply: “It’s something to do that helps somebody out and something I enjoy doing.” He also says he started volunteering as a way of “paying back the community” for personal support he had received from his sangha members.

As we leave the building, the other volunteers described how over time they couldn’t help but develop a special feeling for these residents. Clare admits she really loves them and looks forward to seeing them every week. “Everyone has their own story, and they’re fascinating!” she says. “I’m just glad they’re safe now, and trying to grapple with living in community.”

It’s nice to think that our weekly visit might support that effort in some small way, by providing the residents with a healthy, well-balanced meal that doesn’t require thought or preparation. Clearly, we are also receiving something in return through the opportunity they provide for reaching out. 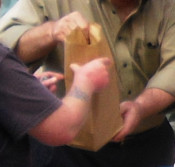 In fact, other opportunities for Zen Center have already begun to ripple out from this effort. Jeffrey has become the de-facto chaplain for this community and has performed many memorial services for residents who have died. As a result, other similar facilities have requested such services as well. Often the deceased are men and women without families or friends. Jeffrey commented, “It is our privilege to provide a final service for them.”

I am reminded of the verse we chant before taking food at formal mealtimes in the zendo: “May we realize the emptiness of the three wheels: giver, receiver and gift.”

In addition to this weekly offering, Zen Center has been involved in serving meals with the San Francisco Interfaith Council and with the Gubbio Project in the Tenderloin. At Green Gulch Farm, Zen Center donates food to ExtraFood.org, a nonprofit that collects extra fresh food from other organizations that would otherwise go to waste, to help people in need. For more information about City Center’s Outreach food offerings or to volunteer, visit our Outreach & Volunteers page or contact Jeffrey Schneider at outreach@sfzc.org.