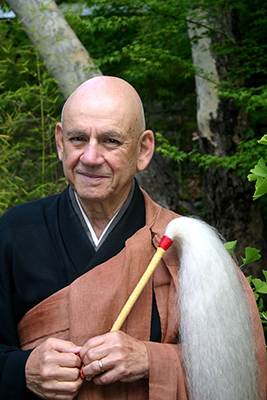 Listening to Sojun Mel Weitsman recall his experience as Suzuki Roshiâ€™s student is the closest I will ever get to meeting Suzuki Roshi himself. And, perhaps had I met him in person, I might have been one of the ones who wandered off after morning zazen and didn’t return, too agitated to stay put, too eager to pour my bustling energy into worldly pursuits. But Mel, he was one of the ones who returned again and again to morning zazen with this unknown teacher of a strange practice. He returned until his ankles stopped hurting in zazen andÂ his thoughts emptied out andÂ he knew that his constant search for a spiritual practice was over.

What was it like to study with Suzuki Roshi in the early days?

When I arrived in 1964, there was only Zen Center at Sokoji Temple at 1881 Bush Street. Suzuki Roshi had arrived in 1959. He sat zazen every morning at 5:45 am. The Japanese congregation had given him the upstairs room for zazen. Itâ€™s a very nice room. It had half-round windows starting from the floor that came up to about your waist and really nice light. There were no zabutons. So, we would sit zazen on tatamis and sometimes just on the floor on goza mats. Thatâ€™s what we would bow on and sometimes sit zazen on. We would lay out the goza mats and later put them back. 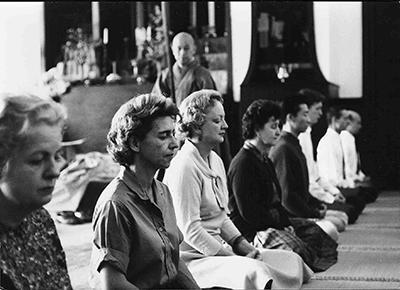 None of us could sit zazen very well. It was hard on our ankle bones (laughs). At that time there were very few people who could sit well. So we all had a very difficult time sitting and that was very much the feeling, that it was really hard to do zazen, because we didn’t have the experience. Suzuki Roshi used to urge us on: “Donâ€™t move.”Â Sometimes weâ€™d be sitting and after 40 minutes, just before it was time to ring the bell, he would say, â€œWe will sit ten minutes longerâ€ (laughs). And so it was a wonderful surprise (laughs).

Sometimes people remember him walking out and then coming back an hour later (laughs). He was trying to help everybody let go of their attachments to their physical condition, like pain. Zazen was a lot about how to be one with the pain, so that you are not creating an opposition.Â  As long as there is no opposition there is no problem. When you create oppositionâ€”I want something different, I want it to change, I want to get out of there or escapeâ€”then it becomes a problem. Â So thatâ€™s what he was silently teaching us.

What kind of things would come up in the discussion? 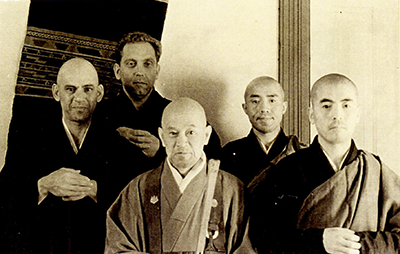 All kinds of questions that people had. I once asked him, “What is nirvana?” And he said, â€œSeeing one thing through to the end.â€

The practice you describe would seem to require a lot of patience from a teacher. And yet, a teacher with extensive training, like Suzuki Roshi, might have preferred to teach more advanced topics to more developed students. 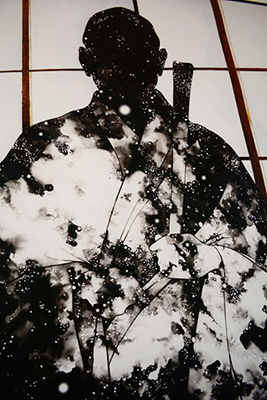 The way that Suzuki Roshi taught, was it different than how he was taught in Japan?

Oh no. He would say, â€œThe only thing I have to give you is my Zen spirit. I am giving you what I know and what I was taught. Then you have to find your own way.â€

Were there many students who did not stick with it?

Well, you know, there are always students who donâ€™t stick with it. The thing about practice is that every Saturday you give zazen instruction to new people, and every once and a while someone will stay (laughs).

What kind of student were you back in those early days of your practice?

Well, I was an artist.

Were you a painter?

Yes, but I was always looking for some spiritual practice. So when I came to sit, it wasn’t very long before I realized that this is exactly what I was looking for. 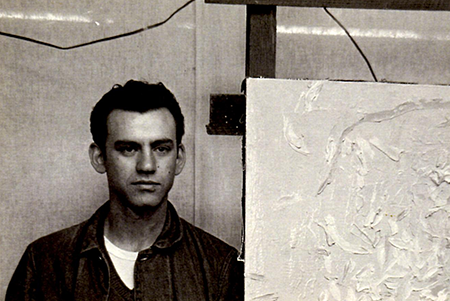 How did you know?

When you met Suzuki Roshi did you recognize something in him?

No, there was nothing like that. He was Reverend Suzuki. It would always take a little while before people recognized who he was because his teaching, his presence, was subtle. He wasnâ€™t dynamic. Matter of fact, he was very slow and easy going. You wouldn’t ordinarily be astonished by him or anything like that. 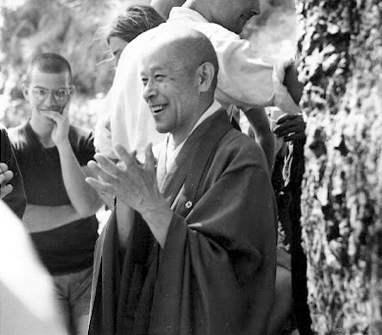 Itâ€™s interesting that you say heÂ didn’tÂ have anything driving him, and yet he opened three centers.

It was difficult for Suzuki Roshi at Sokoji.Â  Because people wanted to sit with him, the Sokoji congregation gave him the room to do zazen but the congregation didnâ€™t sit zazen. The Japanese didnâ€™t do any zazen. They just did a kind of Sunday church.

But people heard that there was a Zen priest in town. So they called him up and he said, “Well, you can come over and sit with me. I sit every day at 5:45 am.” Of course, he also sat in the afternoon. Little by little Americans would come and thatâ€™s how Zen Center started. So, there were two different congregations, the Japanese and the American.

Then people wanted to find a place that was their own. So they did that; he didn’t do it. And that was Page Street. And then they wanted a monastery, so Richard Baker and some people, we found a place called Tassajara. And Suzuki went along with all of that. He was not assertive in that way. He was just present (chuckles). Itâ€™s amazing, actually. 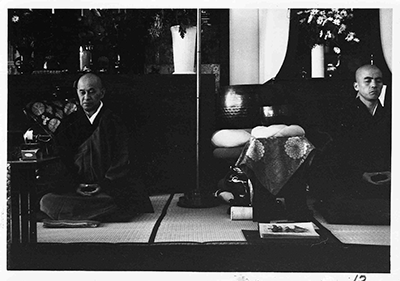 You have dedicated your life to teaching Zen Buddhism. You have been the abbot of Berkeley Zen Center since 1985, you were co-abbot at San Francisco Zen Center for almost a decade, and you have ordained an entire generation of people. Looking back over the years would you say that your relationship to Suzuki Roshiâ€™s teachings has changed over time?

No (laughs). Nothingâ€™s changed. Itâ€™s always been the same. But I think it has matured in some way, but I canâ€™t tell you how (laughs).

I have always used Suzuki Roshi as an example. And, I never changed anything. I have never introduced anything new or some outside source.

Have you ever found that something he said to you comes to you now with a deeper understanding?

He walked up to me one day and said, â€œJust being alive is enough.â€ That has always been a touchstone for me. To keep the practice as simple as possible and not add things to it and not try to expand it in some way. Â To take the simplest practice and let it mature. 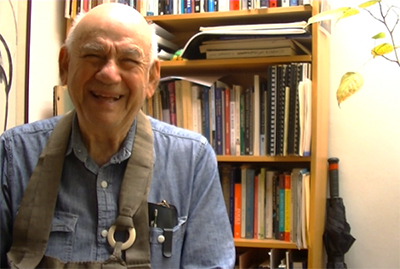 I read that Suzuki Roshi said something to the effect that itâ€™s hard to keep your practice pure.

One of the things I marvel at is the impact of mass shifts, such as a social movement or something like gentrification, and the challenge of being an individual trying to relate to the mass effect of the many other individuals.

I wonder about concerns like national heritage, or a preference, like a political preference, and how asserting these concerns can be viewed as creating duality.

Yes. We live in a dualistic world, no doubt about it. It is very unusual to have a practice that is no discrimination. So, Suzuki Roshi would talk about “Big Mind,” which is the mind that is free from discrimination but includes everything. The main thing is, what is proper discrimination? How to discriminate on the basis of nondiscrimination (chuckles). He just kept to this very simple principle and thatâ€™s our practice. 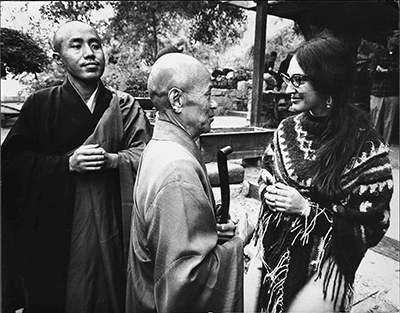 You mention national identity. Suzuki Roshi was not nationalistic; he became a US citizen. At first he wanted to send his students to Japan to experience Eihei-ji monastery. But it was always a disaster (laughs). So he stopped doing that; he lost too many students. He appreciated us because we didn’t know anything. We didn’t have any ties. We didn’t have any ideas. We didn’t have any baggage that was Buddhist or Japanese. So he could let us form ourselves from scratch.

That was the asset that we had. We didn’t know anything, and he could just give us the pure teaching, without any cultural backgroundâ€”even though we were practicing in a tradition that comes from Japan with formalities and the customary way things are done. But that in itself is a teaching.

You mean, within the forms or formalities there is freedom.

I understand that Suzuki Roshi liked to move the rocks at Tassajara. Itâ€™s interesting because this is one of the few activities I have heard of which sounds like a personal pastime that he enjoyed. 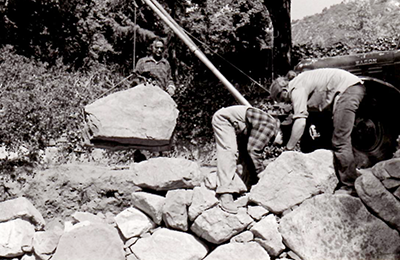 We always moved rocks at that time because we were making rock walls and stuff. We had a Dodge Power Wagon, which was kind of like a dump truck, and Paul Discoe built a winch on the back. And we had the cut-off top of a car, which we turned upside down and turned it into a sled. Then we hauled these rocks up on the sled and carried them wherever we needed them. So, that was everybody. For whoever worked on rocks, that was our recreational fun (laughs).

I wondered if Suzuki Roshi moved the rocks by the Kaisando as a form of aesthetics.

No. He said he thought about moving things around aesthetically but said, â€œThis place has its own aestheticsâ€ (laughs). â€œThereâ€™s nothing I can do to improve it.â€

On the wall of Sojunâ€™s office is a framed photo of Sojun and Suzuki Roshi. Suzuki Roshi stands over Sojunâ€™s clean-shaven head with a razor, and although the photo is in black and white, their robes look rich with graceful folds of fabric against the stark walls of the zendo. Sojunâ€™s smooth young profile is lowered, completely absorbed in the moment, being right present, right in time.