A spotlight on SFZC outreach and volunteers, by Ethan Elder

Zen Center volunteer Ethan Elder offers regular meditation and stress reduction classes in the San Francisco womenâ€™s jail as part of City Centerâ€™s Yoga and Meditation in Jail Program. Here he shares some details of the work and reflects on his experience. 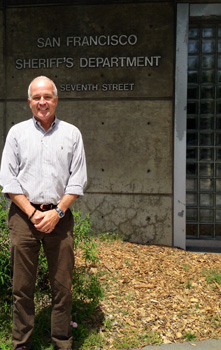 Ethan outside the jail at the Sherrif’s Dept.

I have been volunteering most of my adult life. Having grown up in poverty and having become more fortunate later in life, I wanted to try to give back to the world as much as had been given to me. I joined the Coast Guard as a young man, and that set the wheels in motion. Similarly, my wife and I wanted our two children, especially through the teen years, to see and know the importance of giving and sharing. They both have grown into generous and kind young adults.

I came to volunteer at jail through SFZC Outreach Coordinator Jeffrey Schneider. I had been volunteering with Shundo Haye (tenzo at the time) in the kitchen at Zen Center, and the subject of work in the jails came up in conversation with Jeffrey. I said, â€œThat sounds cool. How do I get involved?â€ He said, â€œFollow meâ€â€”or something close. And off I went. Five years later, here I am.

As it turns out, teaching meditation in jail is not that different from one’s own daily practice elsewhere: often challenging and frustrating, but at the same time rewarding and balancing. I have had weeks when my best periods of practice have been that ten minutes under a glaring neon light. 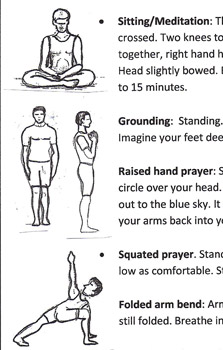 Excerpt from a script for one of Ethan’s yoga routines.

Generally jail volunteers work once a week, and the jails usually allow us only an hour each time. Sometimes we go together, sometimes alone. I have done morning, afternoon and a few evening shifts. My time now is every Thursday afternoon from 2:30 until 3:30. I have learned that this is a good time for myself, and generally a good time for the often-changing schedules of the jail itself. Attendance is usually better, and most of the more pressing jail-type matters are dealt with in the first part of the day. For this one-hour class I plan on being on-site for two hours, including checking in and out as well as waiting time, which can vary widely.

My hour consists of meditation, discussion, readings (poetry, stories, light dharma), light yoga, body scanning and sometimes some music interspersed. Classes have anywhere from two to fifteen attendeesâ€”mostly about right down the middle of those numbers.

With meditation I put out some basic guidelines on posture (we do provide zafus): three points of contact, balanced uprightness (not rigid), hands centered over navel, shoulders back, etc. Chairs are available as well but generally not used. I briefly discuss using the breath to center and bring the wandering mind back. I also use counting as a tool. I start with a gentle bell, following which over time I have come to play ocean sounds from Stinson Beach on my iPod with a small speaker setup. I have other background sounds, but this seems to be the one of choice. Usually I gauge the crowd and feeling, but this period lasts anywhere from ten to fifteen minutes. I end with an abbreviated version of the Lovingkindness Prayer, which is generally recited back after me line for line. Again a gentle bell to end.

May I be free from danger

May I be happy

May I be healthy

May I live with ease

May you be free from danger

May you be happy

May you be healthy

May you live with ease

May all being be free from danger

May all beings be happy

May all beings be healthy

May all being live with ease

â€”as used by Sharon Salzburg in “Metta: The Practice of Compassion” in Quiet Mind: A Beginner’s Guide to Meditation.

Discussion is open ended. I have to be careful because this period can take on a life of its own. Many people have a lot to say, so it is important to be both open and caring but also remember we are on a very tight schedule. I have had sessions that went the entire remainder of the time talkingâ€”and, more importantly, listening. And that is fine too. One thing that I feel is important to bring in with me is an open-ended attitude that is more flexible than it is rigid. Most of jail is pretty damn rigid. If anyone comes for â€œEthanâ€™s class,â€ I think it is because of a reputation of being a fairly open person who tries to share a mutual respect with all.

The yoga routine is pretty light, and I try to emphasize back stretching. There are a lot of complaints of back pain; jail is cramped and the beds are not comfortable. My routine is all borrowed from a variety of sources, starting with James Foxâ€™s wonderful Prison Yoga Project handbook, Yoga, A Path for Healing and Recovery, and adding practices that so many others have shared with me for jail, including Myozen Joan Amaral, Angela Kray, Jeffrey Schneider and othersâ€”not to exclude countless classes and sittings over the years. So, I draw from a large, rich and full wheel of shared information.

Occasionally real yoga teachers have come in and helped, and that is always wonderful. Being the novice I am, I can lead a short routine, but the knowledge and background shared by these folks is invaluable. Just as I know that one small word of advice from a teacher on my sitting posture can and will stay with me, corrections and directions from real professionals can be invaluable with yoga.

My readings tend to be poetry, often from some of my favorites: David Whyte, Pablo Neruda, and Mary Oliver. I try to read things to stimulate thought and conversation. It usually works; sometimes it falls as flat as a Dutch pancake. Sometimes my readings inspire people to talk about their favorite authors or books or quotesâ€”that makes me happy.

In addition, through a generous endowment, Zen Centerâ€™s Outreach Program is able to offer some books for inmates at no charge, and we get a fair amount of requests. These books are put to good use! And often recycled and shared with others. I gave a woman a book once that she requested (something by Jack Kornfield that I read from), but she came back a week later, handed me the book and said, â€œThis isnâ€™t for me; not my thing.â€ Another person asked for it, and a week later she came and told me she was enthralled with it and asked if I could bring more. Such are the shifting sands of jail. 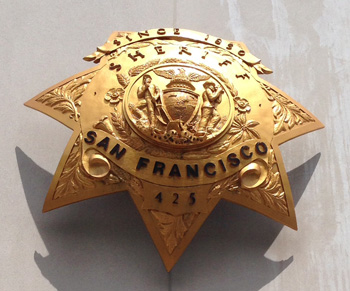 In other ways too, County jail is fairly fluid. Though supposedly the maximum time there is one year, I know people that have been in this facility for over three yearsâ€”but most are short stints: 30 days to six months. And sadly some I see back for another visit. Most people come to my class, I think, for the escape from regular jail routine (and classes). I offer an hour that I hope and feel is relaxing and somewhat reinvigorating. And if it isnâ€™t, we will try again a week later!

Most of the concerns I hear about from inmates involve court dates, post-release life and general complaining about the guards. All of these I have to be careful with. The jail requires all volunteers and workers to go through a helpful orientation training, which often emphasizes: â€œstay in your lane.â€ Important. Though I can, and have, shared information or kibitzed about, one has to be cautious. We are guests; it is jail. The help and change we can bring is through our gentle guidance and meditationâ€”not through opinions and gossip. Jail has a lot of the latter.

As far as inmates establishing a practice, I have heard rumors of some people moving onto a path. Given the transient nature of jail (versus prison), most of our students are passing through for a brief, often bad, period of their life. When they leave, they leave as much behind as possible. But if by chance something we did helped and stayed with them, however small, I think our work is done. One drop in a bucket.

Zen Center has recently expanded its offerings to include Buddhist study and meditation in the menâ€™s unit. More information about all of Zen Centerâ€™s Outreach and Volunteer Programs is available at sfzc.org.