April 29, 2014
Flower Chidens Are Flourishing: The Joy of One Sustainable Stem at a Time
Arts & Culture | Features | Volunteering

A spotlight on SFZC volunteers, by Jay Pennington

Working behind the scenes, flower chidens can easily go unnoticed at Zen Center, although in a way their work is all about display. 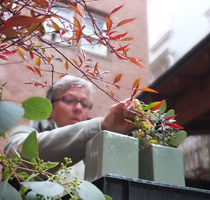 Flower chidens are those who tend to the floral element of altars, and inside the temple on Page Street, flowers are everywhere. For the several most prominent arrangements, City Center has been relying completely and with remarkable success on a crew of dedicated volunteers.

The crew of six, headed also by a volunteer, works harmoniously together every Tuesday through the morning in the back courtyard. After a group bow-in at the garden shed altar around 9 am, Head Flower Chiden Dawna Foreman divvies up assignments. Soon the area is a flurry of stems, leaves and vases—a mostly silent flurry, that is, as the chidens focus on the task, dropping away body and mind until each altar is refitted with fresh offerings of ephemeral beauty. 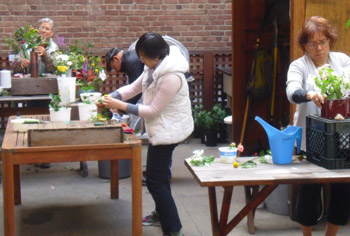 One Tuesday I cornered the crew at tea break for some insight on the production behind all the prettiness. I wondered how it felt for them to work in this silent, disciplined way. “I need to be shushed,” began Adelle Trotta, “I’m not used to quiet.” Similarly Mei Hung, who noted that her arrangements can end up reflecting her current emotional state, was grateful for the chance to tune in through the work, adding, “I think it’s another type of meditation for me.” Mei also volunteers in the City Center library on Saturdays. 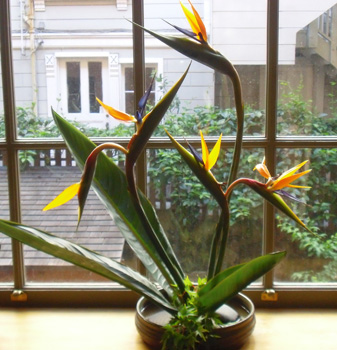 When Dawna started as a volunteer in 2011, the duties were still held mostly in the resident camp. Last year when staffing changes created the need for more help, Dawna headed the effort and asked Outreach Coordinator Jeffrey Schneider to send out a sangha-wide call for volunteer participation, drawing those who could make a regular commitment and had an interest in learning Japanese-style flower arranging. By fall, the current crew had formed, with an enthusiasm that has been a welcome surprise—even an inspiration—to the community.

The spirit they bring to the temple isn’t confined to the flowers, either. Having received Buddhist precepts in a lay ordination ceremony (jukai) last fall, Dawna has formally expressed a commitment to Zen practice and sees a practice leader regularly at the temple. Mark Neider, another crew member, completed the Contemplative Caregiver Course last year and also now volunteers at Zen Hospice. He likes chidening because “it’s creative and an opportunity to be mindful of the materials and how we put them together.” 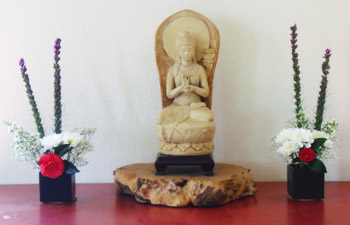 The mindfulness Mark speaks of is evident even in the raw materials themselves, and well before they reach him. For some of the crew, the day begins before bow-in with a visit to the city’s wholesale flower market around 7:30 am. Dawna takes any interested volunteers with her to select the stock they will work with for the week. Sticking to Green principles as much as possible, they look for what is seasonal and sustainably grown, favoring five vendors specially recommended by Zen Center in the Guidelines for Purchasing Flowers, posted by the Ecosattvas group in the “Green Practice” section of the SFZC website. Even greater conservation is possible in the summer, when flowers from Green Gulch are available along with, more and more, cuttings from City Center’s garden and rooftop beds. Moreover, many smaller altars at City Center now use primarily seasonal greenery arrangements in the late fall and winter. 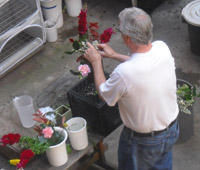 Back at the temple, before any cutting begins, the group starts by reviewing the items that are brought in, to become familiar with the names of the materials. Mark O’Lone, who lives in San Rafael and has a lush home garden, loves to forage plant materials and often adds something unique to the purchased stock. There is a list of regular arrangements to make, and everyone has their favorites. Sometimes Dawna lets her crew choose, and sometimes she’ll nudge someone she feels is ready to take on a more challenging assignment. 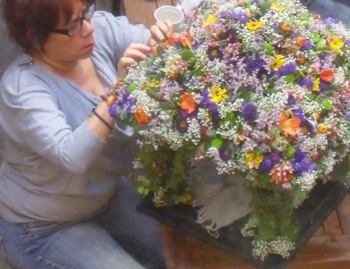 Annette Lorenzo working on the floral canopy for Buddha’s Birthday on April 5.

According to Dawna, planning has proven key to the group’s success. They start planning weeks in advance for events that require extra work, such as the Mountain Seat Ceremony on March 2. As a celebration of their work and dedication around that event, Dawna and her husband prepared lunch for the group on March 2, enjoying conversation and watching SFZC’s live stream of the ceremony together. “What’s been surprising and wonderful to me,” said Dawna, “is how everyone’s talents and skills complement the crew, so we’ve become really integrated in our work. I feel like there’s really not much we couldn’t do given the call.” 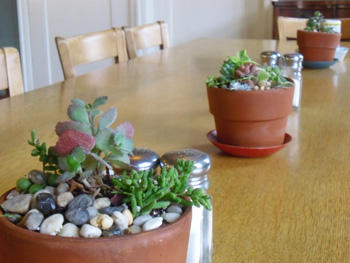 Another example of their collaboration is the appearance of potted succulents on the dining room tables. About six months ago, as Dawna explained, “the idea to replace seasonal dried flowers on the dining tables with the succulents was a collective conversation among the flower chiden crew. We now take care of them, rather than a resident being assigned a house job to make flower arrangements. Several residents have made positive comments and expressed delight watching the little gardens grow.”

Indeed, greenery isn’t the thing that has grown. Friendship, knowledge and skills have also deepened as a result of their good teamwork. Annette Lorenzo (originally a volunteer, now a resident and still volunteering on the crew) says, “We have a lot in common, we enjoy each other’s company, and we learn a lot from each other.” In describing her “new circle of dharma friends,” Dawna adds, “I feel honored to know and work with each one.” 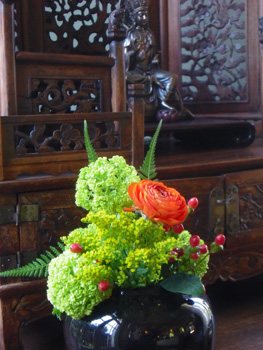 Thus, group outings beyond Zen Center have become a natural outgrowth. Besides the early morning flower market run, some of the crew enjoy attending demonstrations sponsored by Ikebana International each month at the Hall of Flowers in Golden Gate Park. And then there’s full-on Ikebana class.

A student of Ikebana herself, Dawna began sharing her blossoming understanding of the Japanese art of flower arranging with her crew from the start, and many in turn have joined her in a weekly class she takes in Mill Valley. She explained that there are now about 3000 schools of Ikebana worldwide (eight taught in the US), but it all started centuries ago with Japanese Zen monks making arrangements for the temple. Eventually, the practice became popularized for use in the Japanese home and public spaces.

The group’s current class focuses on the most modern Ikebana form, called Sogetsu, which emphasizes individual expression. Adelle appreciates the sense of freedom in it: “Last week we were learning that it doesn’t matter what flower or material you are using; it’s more about space, the space that we’re creating.” 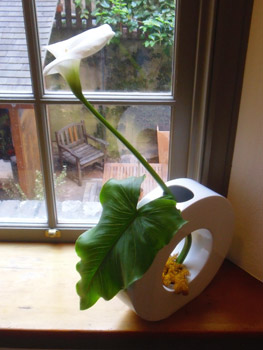 Another volunteer, Annette Abbott, is completing docent training at the Asian Art Museum and will soon have a customized presentation for the chidens and interested sangha members about the history of Buddhism and art in Japan, including Ikebana.

The enriching effects of the class and camaraderie are significant in many ways. As Mei alluded to earlier, the chidens’ keen interest in and full enjoyment of the task can’t help but show up in their product. Mark O’Lone agrees: “The mindfulness and mood of respect and kindness at City Center is a gift I leave with every Tuesday I am there.”

In this way, the flower arrangements by Dawna and crew throughout the temple are not only beautiful to receive visually but an important offering made to Buddha, Dharma and Sangha on behalf of all who practice at the temple, resident and nonresident. Though the crew’s delicate and dedicated contribution is (perhaps appropriately) undercover, the constant floral beauty at our sense gates here may remind us now and then to consider how it comes to us.

__________
Information about volunteering at City Center is available on the Volunteer Program page of the website.