When we enter our Buddhist practice, we usually come to a point—perhaps sometime after encountering our first koan—at which we begin to ask various questions: Why, When, Where, How? The Advanced Buddhist Studies Lecture Series at San Francisco Zen Center offers an opportunity to explore some of the historical texts, concepts and doctrines behind Buddhism today. 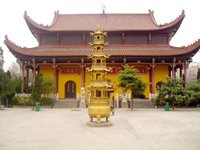 The lectures are condensed, specific and accessible to those who have full schedules and limited time. They offer a closer look at specific teachings in various texts, and at topics that can be challenging and therefore not always presented clearly. The first two lectures of the series in January were based on texts from the early Pali teachings. The next two lectures will cover teachings from the Chinese Buddhist tradition—on the concept of Buddha-nature and on the Platform Sutra, or Sutra of Hui Neng.

Charlie Pokorny will discuss Buddha-nature on Thursday, April 17, in his lecture titled “Everyone Has a Light: Exploring Buddha-Nature in Chinese Buddhism and Our Practice” at City Center. To give you a taste of what Charlie has planned for us, here are his responses to a couple questions:

You have mentioned that “a number of deep philosophical problems” arise from the various assertions of what Buddha-nature is. Could you briefly describe one of these problems?

In Zen teachings, the idea of Buddha-nature, or our “true nature,” sometimes appears to assert that our basic nature is awakening. Compared with what we see in much of Indian Buddhism, this may offer a very different picture of the path. Rather than a prolonged process of uprooting mental afflictions and gradually cultivating an array of virtuous qualities, as awakening is already fully present within us, it just needs to be recognized and enacted or expressed through our lives. This can be a very attractive aspect of Zen, but what are the promises and problems of such an approach? When and how are they recognized by the tradition, both in terms of rhetoric and actual practice? What is the place of “gradual” cultivation in the Zen tradition?

Is there a text which you think is particularly good at illuminating Dogen’s assertion of what Buddha-nature is?

At a number of points in his writings, Dogen engages the teaching of Buddha-nature with depth and vigor. I see him as continuing an important current in Chinese Chan that resists an overly simple resolution of the tension described above. His fasicle on Buddha-nature (Busshō) in Shōbōgenzō is devoted to this topic, but the question of Buddha-nature in relation to practice appears in many places in his writings, such as the opening of Fukanzazengi, and the story of Baoche fanning himself at the end of Genjōkōan. I hope to touch on some of these teachings and how they are engaged and actualized through our practice.

Future topics in the lecture series will focus on Japanese Buddhism and Buddhism in the West. San Francisco Zen Center plans to extend the Advanced Buddhist Studies Lecture Series into 2015 and beyond. The lectures are suitable for any level of practitioner and are presented in a seminar format that allows time for questions, discussion and the opportunity to speak to the teachers afterwards. You can view all scheduled events for the series at sfzc.org. 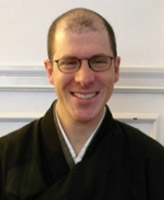 Everyone Has a Light: Exploring Buddha-Nature in Chinese Buddhism and Our Practice, presented by Charlie Pokorny on Thursday, April 17, 7:30 – 9 pm. Charlie Pokorny, a former SFZC resident and an ordained priest, is currently teaching Buddhist philosophy at the Institute of Buddhist Studies (IBS) in Berkeley. Charlie’s thorough scholarship is combined with a light-hearted attitude toward conceptual topics and issues. The concept of Buddha-nature developed in India but became more fundamental to Chinese Buddhism and then Japanese Buddhism. One of the problems after Shakyamuni Buddha’s death/parinirvana, and the passing of his disciples, was who would be qualified to confirm a person’s enlightenment or attainment of nirvana. Yet the teaching is clear that it is possible for virtually everyone to attain nirvana. This requires overcoming hindrances while developing a wide, inclusive perspective of reality through advanced meditative states. Following Buddhist teaching is a matter of discipline and hope or faith in the path. Buddha-nature offers a particular type of hope based in the Buddha’s promise of the possibility of enlightenment for all. 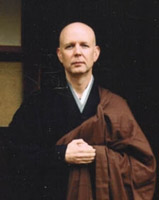 The Platform Sutra: A Guest from Outside Creation, presented by Myo Lahey on Thursday, April 24, 7:30 – 9 pm. Myo Lahey is also a former SFZC resident, and an ordained and dharma-transmitted priest. He was recently installed as the abbot of Hartford Street Zen Center (HSZC). The Platform Sutra, or Sutra of Hui Neng, is associated with the Diamond Sutra, a Chinese teaching on emptiness, because Hui Neng is said to have experienced awakening/enlightenment on hearing a monk reciting the Diamond Sutra. Part of the popularity of the Platform Sutra is that it emphasizes non-text-based insight, though it is an interpretive text itself, and it was his hearing the Diamond Sutra text that led Hui Neng to insight. The underlying implication is that one need not be a scholar or even literate in order to understand and experience enlightenment; it is accessible to everyone. This is an essential Chinese Ch’an/Japanese Zen teaching.