After lecture, we all walk together across the street to Koshland Park, and there’ll be balloons, green grass, laughter, flowers, parasols, bubbles—this, we say, is wholesome activity.  —Mark Lancaster, “Celebrating Buddha’s Birthday,” April 7, 2012

Everyone is invited to join in celebrating Buddha’s Birthday at City Center on Saturday, April 9—a wonderful family event immediately following morning lecture. The annual outdoor ceremony incorporates forms that reenact parts of the traditional/mythical story of the Buddha’s birth. 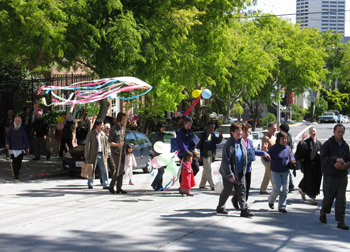 For example, attendees may join the procession and cross the street to walk around Koshland Park three times. The Buddha’s mother is said to have conceived after being circumambulated three times by a white elephant, who then entered her side. Also, on the circuit is a flower canopy sheltering a small statue of the baby Buddha, which is bathed with scoops of tea or water as participants pass, just as special cleansing streams were said to have flowed from the heavens at the birth scene. 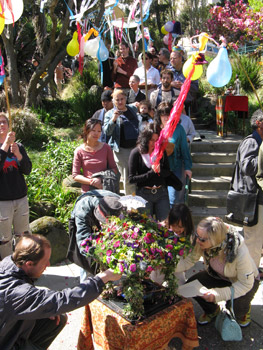 During the walk, participants chant the Heart Sutra while joyfully scattering flower petals.  Afterward, everyone returns for birthday cake.

For readers who could use a refresher on the birth story, here’s one version, summarized below. Also, Zen Center teacher Mark Lancaster discusses the above ritual, along with a fuller story of Buddha’s life and his own reflections, in a 2012 dharma talk given just before the annual celebration.

The Jataka Tales, the most popular legendary account of how Siddhartha Gautama (later named Shakyamuni Buddha) came to be born, tell how the “Great Being” chose the time and place of his birth, the tribe into which he would be born, and who his mother would be. His mother, Maya, was married to her cousin King Suddhodana, who ruled in the kingdom of Kapilavastu. In the time chosen by the Great Being, Maya fell asleep and dreamed that four devas carried her to the Mountains where Himalayan queens bathed and dressed her. In her dream the Great Being soon entered her womb from her side, in the form of a white elephant. When she woke, she told her dream to the King, who summoned sixty-four eminent Brahmans to interpret it.

“The Brahmans said, ‘Be not anxious, O king! Your queen has conceived: and the fruit of her womb will be a man-child. You will have a son. And he, if he adopts a householder’s life, will become a king, a Universal Monarch; but if, leaving his home, he adopts the religious life, he will become a Buddha, who will remove from the world the veils of ignorance and sin.'” 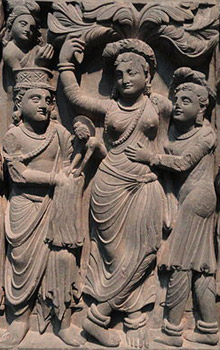 As it was traditional to give birth in the homeland of the father, Queen Maya journeyed to Devadaha. However, she was forced to give birth en route, in the Lumbini grove. It is said that the devas presided over the birth and that two streams, one cool and one hot, flowed down from the heavens. The bodhisattva child was “pure and fair, and shining like a gem placed on fine muslin of Benares.”

It is described how at his birth he took seven great steps and at the seventh he shouted, “I am the chief of the world,” how he at birth held in his hand some medicine that became for him the drug by which he later healed the sick and blind and deaf, how at birth he wished to give a gift but was presented one himself by his mother, and how lastly he sang the song of victory.

Maya died seven days after the birth of her son, whom she had named Siddhartha or “he who achieves his aim.” She is said, in Buddhist scriptures, to have been reborn in Tusita, where her son later visited her, paid respects and taught the dharma to her.