The Mountain in Review, Doubly Descended and Ascended

Last weekend Zen Center spent two days honoring former and new abbots as they respectively stepped down from and stepped up to the “mountain” of leadership. 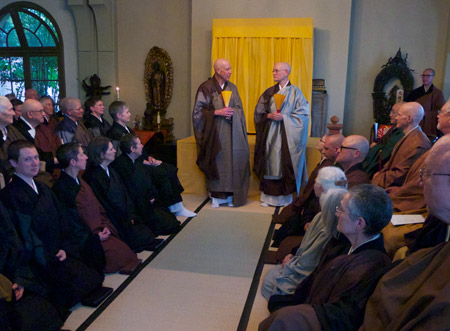 The new abbot and abbess were installed in a grand ceremony at City Center on Sunday, March 2, which was modeled to painstaking detail after a traditional Mountain Seat Ceremony from Japan, but used for the first time in a double installation.

Beginning with a procession through the front door to various rooms in the temple, this historic ceremony included the gift of new ceremonial robes hand sewn by the community, and the actual ascension of the “mountain” stage set up in the Buddha Hall, as well as various statements of support, teaching and appreciation (see program). The event was live streamed as viewed from the Buddha Hall, where the main portions took place and where the audience was seated. The full three-hour recording is available on our live stream site, along with some running explanatory text that accompanied the live broadcast. 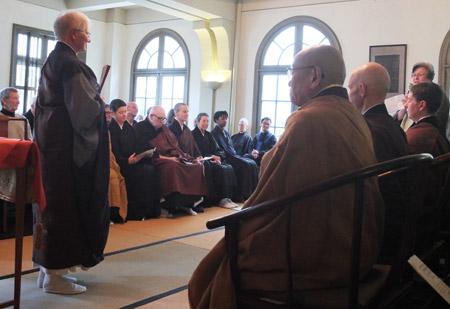 The previous day was also full of ceremony, but at two locations. On Saturday, March 1, Kiku Christina Lehnherr stepped down as Abiding Abbess at Beginner’s Mind Temple in an afternoon ceremony at City Center (see program), followed by an evening ceremony at Green Gulch Farm Zen Center (see program) in which Central Abbess Eijun Linda Cutts relinquished her previous title, Abiding Abbess at Green Dragon Temple. Each ceremony provided the opportunity for various statements of appreciation and gratitude for the abbesses’ dedicated service.

In her now more central role, Linda continues her service to Zen Center in a somewhat different way, with an administrative office at City Center and home base at Green Gulch. She also continues co-leading the current practice period at Green Gulch. Christina has moved back to her home with her partner, Marsha Angus, in Mill Valley, where for the time being she will focus on healing and continue to see Zen students periodically.

It was a monumental weekend as the Zen Center community across its three temples gratefully acknowledged Christina and Linda and just as gratefully welcomed Ed and Fu to lead the sangha into the future.

Additional Photos (click an image to open and close)