“Shall I compare thee to a summer’s day?” At first glance, it may not seem obvious what an Elizabethan poet could have to say about Buddhist practice—in 2014. On the other hand, it’s perhaps not so surprising that one of the greatest writers of all time and one of the greatest spiritual teachers of all time could have pointed to something similar about the truth of existence, even if through different trappings. 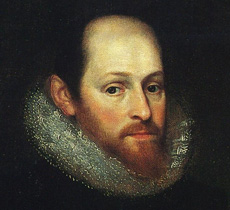 The common ground between these worlds is the focus of the upcoming workshop Opening the Literary Heart: Shakespeare’s Sonnets, led by Lisa Myobun Freinkel and Yo-On Jeremy Levie at Green Gulch Farm on March 29. An award-winning scholar of Renaissance literature as well as a lay-ordained Zen Buddhist and meditation instructor, Lisa is an ideal guide for exploring the relationship between Shakespeare and the Dharma, and the topics of love and beauty—as she demonstrates in her lively and insightful responses to a few questions below.

There have been a lot of “Zen and…s” in both Buddhist and popular culture, but Zen and Shakespeare may be a first for SFZC. It’s not the first time for you, however. How was it received when you lectured on the topic last summer at the University of Oregon?

In a world where you can buy “Zazen” sleep aids in the San Francisco airport (I kid you not; the company’s motto is “drink your Zzzzs”), nobody bats an eye when I lecture on Zen and Shakespeare. Both “Zen” and “Shakespeare” are such capacious, baggy placeholders in our world—people seem ready to believe anything about the two. My job, however, is to make sure that there’s real rigor and substance behind the encounter.

On that note: there’s a 1990s book called A Buddhist’s Shakespeare by a former University of Vermont professor, James Howe. Here was a Chogyam Trungpa student who essentially was arguing, ‘I love dharma, I love the Bard, here’s how they go together for me.’ To me, the project seemed fundamentally personal, idiosyncratic. It was the kind of book I didn’t want to write. I wanted to be able to explore something that would be universal in the way that Uchiyama Roshi uses the term. Uchiyama tells us to live as a universal self, and to see our bodhisattva vow as an expression of that self. For me, the encounter between Zen and Shakespeare needs to be universal in that sense. If it ends up being so, that’s because of Shakespeare’s integrity as a poet: the way he looks down the long barrel of a human life, taking aim at our delusions.

As you were beginning to describe, the book you did write, Reading Shakespeare’s Will, points to an important relationship between Shakespeare and theology. But can you say more about how we relate to the Bard also from the relative non-theology of Buddhism?

Oh, the rabbit hole goes deeper and gets weirder than that! Although I didn’t realize it at the time, my first book essentially proposed a Buddhist reading of Martin Luther. Luther was the guy who said “Let God be God”—arguing for the total sovereignty of the Creator. Even so, Luther’s view of creation ends up being irreducibly nondualist. This is a problem for Luther (as you might imagine), and for the Reformation that he ignites—but it’s a problem which positively animates Shakespeare’s poetry. In the last decade or so, given my study of Zen, I’ve been able to clarify these issues more precisely. More than anything, Shakespeare is one who recognizes just what’s at stake when we wholeheartedly embody the truth that “in attachment blossoms fall, and in aversion weeds spread.” Shakespeare is a poet of suchness.

The workshop at Green Gulch will focus on Shakespeare’s love poems, his sonnets. So, what’s love got to do with it—ie, theology, religion or Zen?

For Shakespeare, love isn’t so much about love, but about beauty—and not even so much about that. In loving beauty, our hearts are cracked open to the truth of impermanence. Shakespeare dares us to nestle down in the midst of that truth, and to cherish the world of forms not despite, but because of, their emptiness. It all comes back to the Genjokoan’s line about blossoms and weeds: what Shakespeare articulates is our relationship to a world that is continually blooming, ripening, festering, dying.

Sonnet 97
How like a winter hath my absence been
From thee, the pleasure of the fleeting year!
What freezings have I felt, what dark days seen!
What old December’s bareness every where!
And yet this time removed was summer’s time,
The teeming autumn, big with rich increase,
Bearing the wanton burden of the prime,
Like widowed wombs after their lords’ decease:
Yet this abundant issue seem’d to me
But hope of orphans and unfathered fruit;
For summer and his pleasures wait on thee,
And, thou away, the very birds are mute;
Or, if they sing, ‘tis with so dull a cheer
That leaves look pale, dreading the winter’s near.

Could you suggest one sonnet to include with this article, to tantalize readers before the workshop?

Sonnet 97 seems to me an impossibly lovely poem about the ways the world dies when we are apart from our beloved. Its sentiments are simple and immediately apparent. But notice how the simile with which he begins (‘we were apart during the summer, but that time apart seemed like winter’) becomes actual by the sonnet’s end. Of course the birds aren’t really mourning the beloved’s absence—but nonetheless, the leaves really are pale, summer really has become autumn, winter really is on its way. Our ideas about being in love and about our beloved: these are, most assuredly, delusion. But our suffering is real.
__________

Continue Opening the Literary Heart by exploring Shakespeare and the Dharma further in person with Lisa and Jeremy on March 29 at Green Gulch Farm.