Zen Master Deshan says, “Realizing the mystery is nothing but breaking through to grasp an ordinary person’s life.” I use that in the dedication to By All Means, my book about the stuffed pig Ponce. This is what I’m doing at my one-day retreats at Green Gulch—by all means—not just Zen, but—if you find something else useful you can use it.”  —Edward Espe Brown 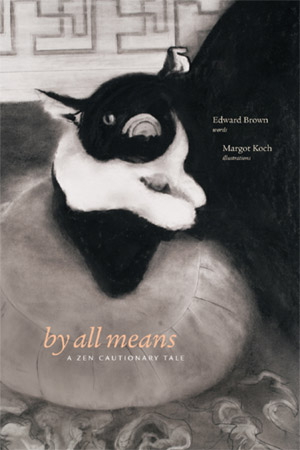 When Zen teacher Edward encounters the puppet Ponce the Pig, an adventure follows, narrated here by Edward Espe Brown and illustrated by Margot Koch. Although Brown and Koch are the makers of this small, engaging book, Edward and his “beloved sweetheart” Margot also appear in it as characters, the narrating “I” of the opening chapters quickly disappearing into the third-person “Edward”—a transformation that makes this a work of fiction, in the best sense, a story, pure and simple. A small adventure tale for grown-ups? A fable of devotion, love, and illumination.

When Edward Brown told me that he had written about his friendship with his much-loved puppet, Ponce the Pig, and that their story would be illustrated by his partner, I imagined this would be a book for children—especially since Ponce often makes an appearance at Green Gulch when Edward gives the Sunday dharma talk on a children’s program day. But not really, he said—the book is dedicated to grown-ups of all ages. And this is a book for grown-ups—playful grown-ups, haunted and sorrowful grown-ups, reflective grown-ups, grown-ups who practice Zen and grown-ups who don’t.

On the surface By All Means tells the story of Ponce’s meeting with Edward Brown and its consequences—first a rescue, then a growing intimacy, a terrifying abandonment, a breakthrough of awakening, and happy reunion. The tale begins when the puppet survives a mauling by a neighborhood cat named Turtle (handsomely drawn by Koch)—a cat obsessed with hunting “stuffies.” Joining Edward’s stuffie sangha—most notably a tiger named Hobbes—Ponce gives his trust and his love to this new family, and most of all to Edward. Loyal and attentive, Ponce remains calm even when Edward works himself up into the meltdown that propels the action toward its climax. But when a driving accident leads to Edward’s embarrassed and very grown-up abandonment of his stuffed animal friends, Ponce almost loses faith. And from that near loss comes his breakthrough of illumination and love.

The story, of course, belongs as much to Edward as it does to Ponce, and it is rich with intimate revelation as the collaboration and friendship between Zen teacher and puppet pig grow. For a reader familiar with the speaking voice of Edward Brown, Zen teacher, it is one of the pleasures of By All Means to hear that voice strong and clear in the written voice of the fable’s narrator, by turns humorous and plaintive, ironic and dead on. 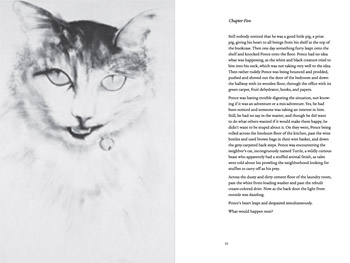 Before Ponce’s discovery by the stuffie-hunting Turtle, living forgotten on a shelf, he had “decided in the absence of social contact to cultivate his meditation skills.”

He focused on his breathing, the sensations of inhalation and exhalation, which were quite subtle, and soon enough, sure enough, he could not tell the difference between deep meditation and being completely spaced out. Which was he? How were you supposed to know?

Ponce’s awakening through his friendship with Edward—and with Hobbes and Margot and all the other inhabitants of his new world—even Turtle—indirectly suggests an answer to this question. In a sense paralleling his practice of “meditation skills” when he was lonely on the shelf, late in the book, abandoned again and on the way to a junkyard, but now in company with Hobbes, Ponce turns “his attention to the space inside,” where he finds “his heart swelling.”

The space within was like that: vast and expansive, warm and tender without dimensions. And all of his friends were gathering, just as fast as he could think of them.

“This book about the stuffed pig Ponce just appeared. Most of my writing I have to work and work and work. But this just came through. And then it kept coming through.”

Early on in the book the narrator offers this reflection on his friendship with Ponce, which I would like to read as both the seed of the story and its fruit:

It may be that Ponce’s little piggy pain was really my own gaping wound that hurt so much that sharing it with anyone was problematic. Still Ponce was willing to let me share my big pain with him, while I pretended it was his—and as long as I was pretending I really believed that it was Ponce’s pain. Ponce was a real friend in that regard, because not every critter you meet can stomach such a blend of fact, fantasy, and fiction without trying to sort out which was which, which was whose, and how to fix it for the better.

I take these words as a friendly caution to the reader also—not to try to sort out which is which, or how to fix it for the better. But like Ponce, “simply to take it all in.” 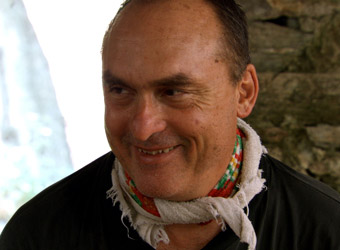 When we let it in, we find like Ponce the opportunity to be the great love that we are: “Dazzling!.. And there was no Ponce to be found. Just sparkle, throughout space and time.”

“Take us home eddiebear,” the lost and rescued creatures cry when their friend comes for them, using his most intimate nickname. I would like to use that nickname too, just this one time—all gratitude to eddiebear for telling this story and taking us home.