As we will be chanting the Great Compassionate Mind Dharani in a memorial service next week acknowledging Venerable Bhante Suhita Dharma’s passing, we thought to offer this article written by Lee Lipp for the Windbell, a publication of San Francisco Zen Center. Here are some excerpts from the article in Windbell’s Summer 2001 edition that point to Venerable’s continuing generosity to SFZC as he engaged with our sangha’s Teachers in Residence Program, which had started that year. 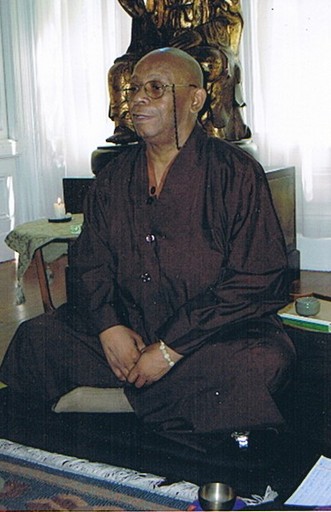 … Zen Center hopes to to promote diversity within our sangha and to be more inviting to the multicultural populace in the Bay area. Venerable Bhante Suhita Dharma, our first teacher to participate was in residence at City Center from February 9 through February 25, 2001, engaging with us in a variety of activities.

Bhante was born in Texas, then moved with his family to San Francisco at the age of two weeks. He lived in the Bay Area for many years. Bhante has followed a spiritual path through monastic traditions of a variety of religions. A monk since the age of 15, he has lived as a Christian Trappist and has been ordained in the Tibetan Buddhist and Vietnamese Zen traditions. Presently he also affiliates with the Coptic Church. As an African American teacher he has engaged with a wide range of cultural and ethnic environments. He is remarkable in that he has delved deeply into the contemplative life as well as engaging in and bringing his practice to the social difficulties of the world. He has a degree in social work and has worked extensively with the homeless, people with AIDS, in the field of geriatrics and with people who are in prison. Ordained as a teacher by Dr. Thich Thien-An in 1974, he served as a vice abbot at the International Buddhist Meditation Center in Los Angeles in the 1980s with Ven. Karuna Dharma. He is also one of the initial members of the Zen Peacemakers Order and continues to work with that group and its founder, Bernie Tetsugen Glassman Roshi.

Bhante’s schedule while in residence at Zen Center included dharma talks and informal teas for many groups, including the Hartford Street Zen Center, the Berkeley Zen Center, the Buddhist Peace Fellowship, the Community of Mindful Living, Parallax Press, and the Palo Alto Mid-Peninsula Meditation Center. He presented the public Saturday dharma talk at City Center to a full Buddha Hall and also gave the dharma talk and private interviews during a one-day sitting for People of Color Sangha. Bhante spoke with … students at Green Gulch Farm as well as to members of the Prison Meditation Network at City Center. He was the featured speaker at City Center’s Buddhist Peace Fellowship chapter meeting. At the culmination of his visit, he invited the extended community to join with the People of Color sangha to chant and drum as part of an inspiring healing ceremony. Generous with his time and teaching, meeting all requests with a full “yes,” Bhante joined City Center residents at meals and for lively conversation as well as making himself available for private interviews. Embodying an awakened, compassionate nature in a down-to-earth, friendly manner, he was a joyous resident and visiting teacher. The only change we would make for his next visit would be to provide him more time for his own rest, replenishment, and practice.

Venerable came to SFZC several times thereafter, and we hold him close in our heart. We bid him farewell in gratitude for his teaching and joy which continues to enrich our lives.