In collaboration with Central Abbot Myogen Steve Stücky, the Elders Council recently issued—“with sadness and gratitude”—recommendations for responding to the needs for leadership resulting from Abbot Steve’s sudden and steady decline in health. As noted below, it was decided that Steve will remain in the position of central abbot for the present and until such time as both he and the transition group* determine that he is no longer able to sustain the role. 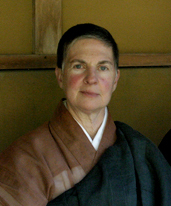 Based on the Elders’ recommendations, the Board has invited Linda Ruth Cutts to serve as the Central Abbess of Zen Center for a regular four-year term, with the possibility of extending for two three-year terms. The beginning of Linda’s term is yet to be decided, depending on Abbot Steve’s health and ability to continue to fill that role.

Additionally, the Board has invited Furyu Schroeder to serve as Green Gulch Farm Abiding Abbess for a regular four-year term, with the possibility of extending for two three-year terms.

The Mountain Seat Ceremonies for Ed Sattizahn and Fu Schroeder are scheduled to take place on the weekend of March 1 and 2. More specific details will be posted as they become clear.

In their letter to the Board, the Elders said:

We feel that Linda is uniquely suited to take up the position of Central Abbess, with her long involvement in and support of Zen Center administration. She has been participating in many of the current important programs, such as the Capital Campaign and Widening the Circle Campaign, and the possibility of a Retirement Center. Linda is very supportive of all of the different aspects of Zen Center’s diverse community.

We also feel that Fu is well prepared to become the Abiding Abbess of Green Gulch Farm. She has been a practice leader for many years and has been a help and inspiration to many students and colleagues. She has led practice periods and ordained two priests and a number of lay people. We look forward to hearing her teaching voice from this seat. She also supports Zen Center’s current programs and directions.

Both Linda and Fu expressed readiness to serve Zen Center in whatever way the Board requests.

We would also like the Board to know that we realize that the timing of these three terms beginning at nearly the same time is not what would normally be acceptable. However the extenuating circumstance of Steve Stücky’s illness has made this necessary. We understand that their terms should not all end at the same time and will keep that in mind.

The Elders feel great gratitude to Linda and Fu for their willingness to take on the responsibility of guiding Zen Center during this time. We feel that Zen Center will be very well cared for by them.

We invite you to support these teachers in their upcoming new roles at Zen Center.

Eijun Linda Cutts came to San Francisco Zen Center in 1971 and was ordained as a priest in 1975. She has lived at Tassajara and San Francisco City Center, and has resided at Green Gulch Farm since 1993. In 1996 Linda received dharma transmission from Tenshin Reb Anderson and served as Abbess of San Francisco Zen Center from 2000 to 2007. She was appointed Abiding Abbess of Green Gulch Farm Zen Center in 2010 and continues to teach and lead practice periods and retreats at Tassajara, Green Gulch, Mexico, Italy and elsewhere. Linda sits on the Steering Committee of the California Interfaith Power and Light (CIPL), an interfaith group dedicated to addressing climate change through faith based education and skillful action. Linda has been leading Yoga-Zen retreats and workshops for many years.

Nancy Furyu Schroeder, a resident of Zen Center for over 30 years, is currently the Director of Children and Family programs at Green Gulch Farm where she lives with her partner Dr. Grace Dammann and their 18 year old daughter Sabrina. Fu has held most of the monastic positions at the Zen Center and has been an active supporter of programs for children, people of color, the gay and lesbian community, and the interfaith community. In 2008 she was elected to the Marin Women’s Hall of Fame, and in 2010 she was appointed to the Board of the Marin Community Foundation. She received dharma transmission from Tenshin Reb Anderson in 1999.