November 26, 2013
Along the Path of No-Path: Images from Pilgrimage Trips to Japan, by Tom Hawkins
Arts & Culture 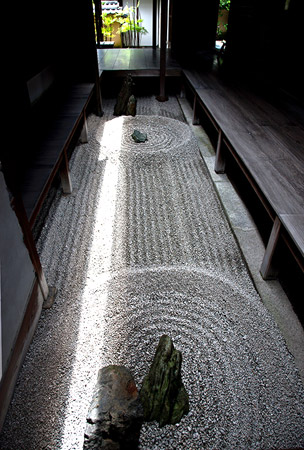 These images were made during trips to Japan in 2007, 2010 and 2012. They are primarily of Zen places. The pictures are investigations and souvenirs of things seen by my various “selves”: photographer, landscape architect and Zen student.

My first trip to Kyoto to explore temples and gardens was filled with wide-eyed wonder. Here were all of these places that I’d studied in graduate school as I pursued my studies as a landscape architect, and had heard about in Zen teachings and literature. Surely if I learned even more about the places, the designers and the ancestors, I could speed up my journey on the path. Recalling this now makes me smile.

Subsequent visits have been less thrilling, and devoted more to seeing, rather than “gaining.” What is it like to see what the ancestors saw? And yet, the question itself is not correct. We can never see what others have seen. These prints are not even what I saw, just an attempt to recall a perception that occurred at a particular moment.

The most recent pictures are in a panoramic format. I would like to think that this means that I’m experiencing a ‘wider view.’ Perhaps, someday, I’ll look back upon that perception with a smile, too.

Maybe I just enjoy working in this particular way just now. As Suzuki Roshi said, “That is all, but it is splendid. This is how we appreciate things.”

Tom has lived in Modesto, California, with his spouse, John, since 1992. In addition to his photographic projects, he cultivates a small olive farm. His photographic work is primarily rendered in hand-coated historic processes, including platinum/palladium and gold. The prints for this exhibition at City Center are carbon pigment prints.

His work is represented in San Francisco by Corden Potts Gallery, at 49 Geary Street. Tom’s work was recently exhibited there in a solo show, “The Biggest Garden.” Galleries in Houston, Texas, and Brighton in the UK also represent his work.

Tom received jukai in 2011. He practices at Issan-ji, with the Hartford Street sangha.

At Tenjuan, a subtemple of Nanzenji, Kyoto