The Night We Summoned the Deceased

Last Thursday on Halloween night, City Center held its annual Sejiki Ceremony. Sejiki is a traditional Japanese Zen Buddhist ceremony for the spirits of departed ones.The Buddha Hall was transformed for the event. The altar stood at the back of the room instead of the front. The Buddha statues were covered in black cloth. And the walls were lined with disturbing images of phantoms and other-world beings. 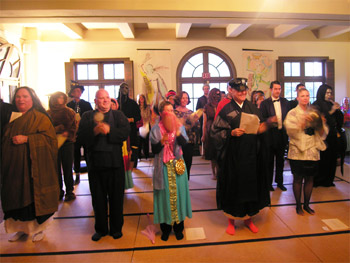 People streamed into the hall, taking their place in straight rows that faced inward. Many wore costumes. Most wore black. There were no children in attendance. The white-and-black face paint that some wore aroused the same feelings as the phantoms on the walls.

Senior Dharma Teacher Paul Haller arrived to lead the ceremony, carrying a staff of familiar but nonsensical parts which rattled when he put it down, like the chains of Jacob Marley. Despite being attended by priests wearing brightly colored wigs and some outrageous costumes, the senior dharma teacher said his words with much ceremony and feeling.

Our chanting of the ancient Japanese words was accompanied at one point by the bold, flat strike of a drum. The rhythmic and rapid melody helped us loose our thoughts in the rigor of our chanting, much like the synchronized movements of oarsmen, crossing perhaps the river Styx. In the middle of the ceremony we made a great noise with noisemakers and bellowing voices to call the dead ones forth so they could feast on the offerings on the altar.

One by one, Tanto Rosalie Curtis and Senior Dharma Teacher Blanche Hartman read the names of those we wished to call forth to say goodbye to. It was a very long list, attesting to the many ancestors and spirits, sometimes “hungry ghosts,” for whom we wish ease and satisfaction. And in this way, we called forth all of our real and imagined demons and in one great, group effort sent them off to a better place, leaving all of us in a better place.