We had a most excellent and impactful meeting of the Branching Streams over the weekend of September 12 to 15. 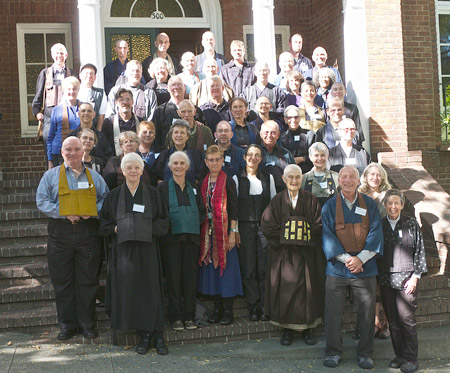 Branching Streams is the term (coined by Michael Wenger some years ago, and originally from Sekito’s poem “Harmony of Difference and Unity”) used to describe the network of San Francisco Zen Center’s affiliate sanghas. The intention for this network is to encourage the practice of Soto Zen in the Suzuki Roshi tradition, in inclusive and creative ways, in Zen practice centers large and small. Branching Streams exists to explore our interconnectedness, to nourish members’ practice and to find new ways to benefit each other. The network of affiliate sanghas is currently composed of more than 40 dharma centers in the United States, from Tampa, Florida, and West Bath, Maine, to Ashland, Oregon, and Northridge, California, as well as centers in Canada, Ireland, Slovenia, Italy and Germany; and this network is continuing to grow.

With this conference, attended by over 60 people representing many of these sanghas, the dharma centers of Branching Streams may indeed have found new ways to benefit each other. Discussion topics included keeping our emphasis on the fundamentals of Zen practice while simultaneously working to serve a diverse community of practitioners; how to provide training for long-term practitioners; and the nature and future of Western Zen centers.

Our get-together ended on Saturday evening with a rousing and quite wonderful staged-reading production of a contemporary musical play, The Fourth Messenger, which imagines: What if the Buddha were a woman? What if she were alive today? The response to the reading was unanimous enthusiasm, and overall the audience expressed a deep sense of resonance with and appreciation for the performance.

Below are some responses, grouped by general topic, from various participants about the weekend gathering. Thanks go to the following for their contributions to this report: Rick Mitchell, Jill Kaplan, Trisha Teeter, Choro Carla Antonaccio and Dyan Ferguson.

“First and foremost, it was encouraging just to look around the room and see so many groups represented from so many parts of the country—amazing that Suzuki Roshi’s Zen has taken off and taken root so far from the tree, and yet the branches remain interconnected by our common intention and dedication.” 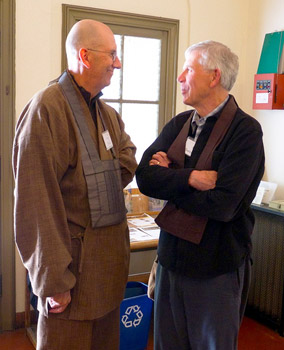 “Engaging in the conversation with many sanghas like ours brought to the forefront our common dedication to zazen as a practice and as a way of life. I was especially interested to hear how others encouraged daily practice in a diverse and wide-spread community, as that is an issue close to my heart practicing with a lay group.”

“It was encouraging beyond words to be with so many people practicing Suzuki Roshi’s way, to sit together, bow, chant, eat and talk, for a couple of precious days. I deeply appreciated the willingness of attendees to just be themselves and to engage with each other with openness, honesty, enthusiasm and integrity. Whatever the goals and results, I am deeply grateful to the organizers and to everyone at City Center and in the SFZC organization who worked very hard to welcome us and make the event possible.” 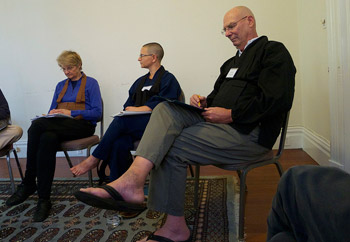 “Our session on training allowed a conversation to deepen about lineage and its meaning to us. It was moving to be in a group of practitioners with experience in Zen practice from one to more than 40 years; and moving to agree that the intention to practice for ourselves and others well into the future runs deep into the marrow of our being.”

“The sanghas represented ranged in size from small sitting groups meeting weekly or twice-weekly in someone’s home to established and growing mid-sized Zen centers with resident priests and students. The consensus our group came to was that Dogen’s model [of monastic training positions] is useful and relevant to contemporary practice even in lay sanghas, but practical only when there are a sufficient number of senior students to responsibly fill these roles. 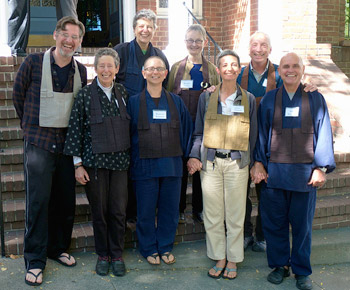 “An overarching question in our small group meeting was the increase of diversity in our centers. Members from one center shared their experience in the public schools—offering meditation and programing and being able to integrate people from these programs into their center and the center’s board. Discussion continued as it related to ‘white privilege’ and the issues of class and education as well as race. The discussion was broadened to the use of the dharma as medicine, and the shared intention and determination to make it accessible to all people. Further discussion related to the work of introducing the dharma to a younger generation. SFZC has created an ‘affinity group’ [Young Urban Zen] specifically for a younger audience, as have a number of other centers.”

“We realized that our relationship to money makes a difference in our activity and ability to raise it. One person expressed the feeling that there may be a conflict between Zen study and training and having a ‘product’ for sale. Another objected to the whole idea of ‘product.’”

A listing of affiliate sanghas may be found on the Affiliated Groups page on our website. For more information, please contact us at branchingstreams@sfzc.org.