‘Accepting what is as it is and helping it to be its best.’ That too is the essence of leadership…

There was once a great leader who summed up his best practices for achieving the highest imaginable success in eight simple bullet points: Right View, Right Intention, Right Speech, Right Action, Right Livelihood, Right Effort, Right Mindfulness and Right Concentration. Right. But how do these work in a world dominated by competition and the bottom line, when you’ve got something other than monks to work with? We asked two Zen teachers with a variety of leadership experience how these teachings could be effective for leaders and their challenges in today’s world. 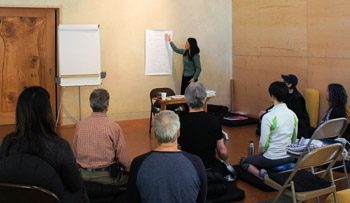 Answers from Konin Melissa Cardenas, MBA, a former finance professional and recent head student (shuso) at Zen Center, join those from Shosan Victoria Austin, whose leadership roles have included the following: kokusai fukyoshi (an international priest of the Soto School); president and Dharma teacher at large, as well as several officer and director roles at San Francisco Zen Center; tanto (head of practice) at Tassajara; a certification assessor for Iyengar Yoga National Association of the United States; and yoga teacher. On November 2, Konin and Victoria will lead the workshop Leadership on the Eightfold Path at City Center.

SNW: What does the Eightfold Path have to do with leadership? And what is the “Buddha’s study process for transforming the human condition,” as mentioned in the description for your workshop? Or, are they the same thing?

Victoria: “Buddha’s study process for transforming the human condition” is an informal description that points to how following the Eightfold Path can change the way we act in life. For instance, view can be transformed to a wise overview consistent with our deepest values, as well as with the mission of the organization in which we lead. Motivation can be transformed into a wise intention that gives a constant, wholesome sense of purpose. The other six limbs of the path teach a homing sense for discernment about what is proper for us in speech, livelihood, action, the use of time and energy, mindfulness and concentration. Wisdom develops from direct experience of this study of human life. Not only are these all important topics for leaders to study for their own use, but they are also tools to open the way to a group environment of stability and discernment in the work environment as a whole.

Konin: Your question reminds me that Suzuki Roshi was once asked by someone to describe Buddhism in just a few words. He replied, “Accepting what is as it is and helping it to be its best.” That too is the essence of leadership, and the people who are able to work in the world that way are the people that we are willing to follow. Still, it can be helpful to break it down and look at it from a variety of perspectives. So the Buddha, in one of his most fundamental teachings, set out these eight steps that provide the framework for accepting what is and helping it manifest as its best. In the workshop we’ll talk about each of the steps from the Zen point of view.

SNW: How do you define the culture of leadership? Could you provide some examples of how being in this culture creates suffering?

“The starting point of Buddhism, which is that we must recognize that things are connected or suffer the consequences, is right on point in today’s business world.”

Konin: In American society, and perhaps in other places, the culture of leadership can be based in a zero sum thinking. That is, it can be coming from the standpoint that if one person gains, the other person loses. This sense of separation, and the fear and greed that develops from a mindset of scarcity, is the basis of suffering. It can lead to a lot of conflict, both externally and internally.However, in a world that is increasingly interconnected, organizations and their leaders have to behave differently.

One way is to explicitly acknowledge interconnection. A good example of this is when Google, Yahoo and Microsoft partner with each other in specialized markets like tablets or mobile operating systems. To the extent that they cooperate to make people more interconnected (in the technological sense), they improve their own bottom line and coincidentally those of their competitors, suppliers, employees and shareholders too. So the starting point of Buddhism, which is that we must recognize that things are connected or suffer the consequences, is right on point in today’s business world.

“A present-oriented leadership culture produces a sense of life and responsiveness between leaders and followers, and honors difference and dissonance while stimulating a unified sense of purpose.”

Victoria: Regarding a culture, the Buddha pointed out that though everyone is fully endowed with the qualities of awakening, it is our habits and preconceptions that prevent us from realizing this birthright for the benefit of ourselves and everyone around us. How do we create a culture of leadership grounded in the unpredictable present moment, rather than in a set of preconceived habits? A present-oriented leadership culture produces a sense of life and responsiveness between leaders and followers, and honors difference and dissonance while stimulating a unified sense of purpose. 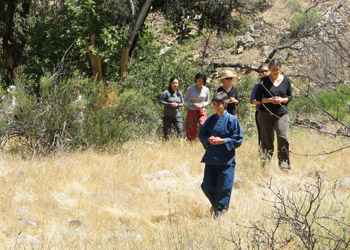 SNW: How can a leader be compassionate and still be a strong and effective leader who must make tough decisions that won’t please everyone? Could you provide an example?

Konin: A true leader must be congruent—they must act in a way that demonstrates integrity in their decision making, expressing clarity and honesty about their own views, all the while staying plugged into connections with the people and events in the environment. When that happens, everyone understands the benefits, even if the choice was a tough one to accept. The Buddha’s teachings on Right Action and Right Speech relate directly to making our lives congruent with the way things truly are.

A great example of this was when Johnson and Johnson’s chairman, James Burke, decided to pull 31 million bottles of Tylenol off the shelves after seven people were poisoned by the painkiller. He knew, as did thousands who worked for the company, that they would pay a high price for such a drastic move. However, he also knew that by acting decisively and with integrity they would be offering the most skillful response, and everyone would support the decision. In the end, it was a difficult choice that made the company and its people much stronger. So by acting in accord with ethical precepts and an understanding of how the company and its people were integrated into a bigger picture, the chairman led the way through a trying situation.

“Leadership is an apprenticeship discipline, and the main skill is effective response in the present…”

Victoria: Friendliness is the ability to hold others’ welfare as important; compassion is the ability to feel the reality of others’ stress and pain. So a compassionate leader is one who recognizes the importance of impact, as well as intention. Though compassion is usually felt case by case, a leader whose mind has been opened by a long-term practice of compassion has developed the background to make altruistic decisions, respecting and safely channeling impact, for the benefit of the whole.

A good example comes to mind from my term as president of San Francisco Zen Center. We were almost at the end of our budget planning process for the coming fiscal year, and it was painfully clear that we would have to make some very unpopular decisions to close a huge financial gap. Everyone was quite worried, and tensions were running high as people imagined the possible consequences. Then one day our board chair, Matt Jeschke (now a regional manager at Kennecott Exploration/Rio Tinto), suggested that we include every person working for the organization in any capacity, from guest students to abbots to employees. We would divulge the size of the problem, as well as the percent of the total budget their area historically earned and spent. 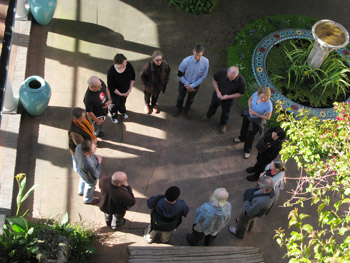 The upshot was that the workers made over 150 suggestions, 100 of which were developed and implemented by the organization. That year we ended up with a substantial surplus, plus some new practices, programs and ways to save that are still institutionally visible more than ten years later. I believe that Matt’s openness was the direct result of his compassion, and that the inclusive tone of his approach was the determining factor in the workers’ abilities to face and follow through with unpopular budgetary change.

SNW: Is there anything else you’d like to add in closing about leadership?

Victoria: I resonate with the answer an honored martial arts teacher once gave me when I asked him what the difference is between a black belt and a brown belt: “They have the same skills. However, a black belt knows when not to use them.” I believe that leadership is an apprenticeship discipline, and that the main skill is effective response in the present, particularly what to do and what not to do.
_____

The conversation with Konin and Victoria continues at City Center on Saturday, November 2, in Leadership on the Eightfold Path. Follow the link for a workshop description and biographical information.