Last Wednesday, the San Francisco Zen Center Board of Directors invited Ed Sattizahn, a former SFZC president, board chair and alumnus, to take the role of City Center abiding abbot next year. The board introduced him at a community meeting that evening at City Center, where he was welcomed with several expressions of appreciation for the abbot-elect and the potential represented by this selection. 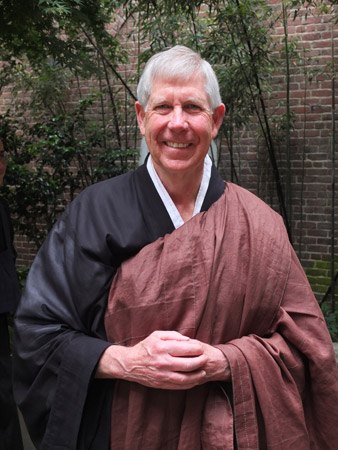 Ed is slated to take the position with a mountain seat ceremony in February next year (date to be determined). Current Abiding Abbess Kiku Christina Lehnherr, who requested to step down because of health considerations, will continue in her role until then. She left the city this week to lead the Fall 2013 Practice Period at Tassajara, and will return in December.

The Elder’s Council, composed of current and former abbots and abbesses, typically deliberates for several weeks to months about abbatial candidates before offering a recommendation to the board. The council sent its recommendation last month with this statement:

The Elders feel that Ed’s long experience in Zen practice both as a resident and non-resident, a layperson and a priest, will be a very large benefit to Zen Center, especially the City Center. We are grateful for Ed’s long dedication to all aspects of Zen Center’s well-being and are very happy to offer him this opportunity to focus on the formal practice side of life here together. We also feel that Ed’s knowledge of and ability to relate openly and honestly with people will serve him and us well. We are especially glad to have another teacher who knew and practiced with Suzuki Roshi to lead us.

Ed Sattizahn began practicing as a guest student at Tassajara in 1970 when Suzuki Roshi was still actively teaching. He came several times to Tassajara and City Center in the following two years, and each time met with and was deeply affected by Suzuki Roshi and his teachings.

In 1970 we were all enamoured with zazen, enlightenment . . . and of course Suzuki Roshi was just like nobody we had ever met before—uncannily perceptive, so present you couldn’t believe anybody could be that present, aware. But why I loved Suzuki Roshi was not that, but because he met us, he really met us. . . . We were all quite diverse, and yet he managed to meet each one of us quite profoundly.
—Dharma talk, May 25, 2013

In December 1972, Ed became a resident at City Center and in the fall of 1973 moved to Tassajara. He spent four years there: eight practice periods and four summers. In 1977, after being director during the Marble Cone Fire, he moved to San Francisco and spent five years in Zen Center administration, including serving as Zen Center’s president.

In 1982, Ed moved away from working at Zen Center to focus on his career as an executive in the microcomputer software industry. He continued to serve on the Outside Financial Advisory Board.

In 2000, Ed retired and returned to the Bay Area and started to focus most of his energy on Zen practice. He began to sit at Everyday Zen with Norman Fischer and eventually helped found Vimala Sangha with Lew Richmond. Vimala Sangha is named after Vimalakirti, the famous householder disciple of the Buddha, and is dedicated to the practice of householder Zen in the tradition of Suzuki Roshi.

He was shuso with Abbess Linda Ruth Cutts at Green Gulch Farm in 2003. Ed received lay entrustment in 2005, was ordained as a priest in 2010, and received Dharma Transmission in 2012, all from Lew Richmond. During this time, Ed also served on the Zen Center Board for six years (2006-2011) and as Board Chair for three years (2009-2011). He is the guiding teacher at Vimala Sangha Mill Valley.