SFZC member Hugo Medina shares what membership means to him in this transcribed interview. Excerpts are also included in a 4.5-minute video along with selections from five other member interviews. To view the video or to sign up for membership, visit our membership page.

What made you decide to become a member? It was a long process. I had been coming out to Dharma talks, and I really enjoyed that. So, then I decided I should do something. 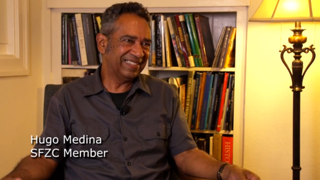 I would volunteer for watershed work weeks, part of the restoration program at Green Gulch, and there were also regular work weeks where people work on all kinds of projects around the zendo, the fields, the other buildings. And then I decided to deepen my practice by having a teacher. So about nine years ago, I asked Fu Schroeder if she would be by teacher. And I started the process by taking the boddhisattva vows—at least the jukai ceremony. That happened about seven years ago. That was one of the highlights of my time so far at Zen Center—taking the vows, with three other people, and having my daughter there, many of my friends there, to see this transition to a deeper practice in Buddhism. And very soon after that, I realized this is good; I come here, I take part, but there’s also another element that I need to add, and that is really becoming a member of Zen Center—saying yes, I belong to Zen Center, I want to contribute financially to everything that they do which makes my life so much richer. They give me so much. The whole community. Everyone. I thought, it’s time—to make a commitment, to say yes, to support this community as much as I can.

What does it mean to you to actually support Zen Center financially? It’s part of the practice. It took me a while to understand that fully, but it’s part of the practice of Buddhism—dana (giving), the first precept, or paramita, of the six paramitas. And I realized that was something I really needed to practice—giving—and one place to give is to Zen Center, and that leads me to other forms of giving whenever I can. Another element that I have learned about Buddhism through Zen Center is community, sangha. I feel that even though I am not a resident, I am supporting the residents and I am part of this larger community that is considered a sangha. That is very meaningful to me. It has become really important. It helps my practice knowing that these people are there. Many of them know me. And I know they are supporting me even though I don’t live there.

What would you say to someone considering becoming a member? If this is part of your life, a place that enriches your life, draws you to a better place in your life, then it’s important to think about how you can help in a more committed way and more active way. That’s what I really think. When I became a member, I began thinking, okay, I’m a member, what can I do? I began looking to people and programs: what can I do to help? I found becoming a member was a catalyst for doing more. It’s great, very enriching.

Could you say more about the way in which it was a catalyst? Becoming a member is a catalyst for engaging with the community more. One of the things I have done recently was I took part in the Sit-A-Thon. It was wonderful. I may not have thought about it if I wasn’t a member. But because I was, I began thinking, here’s an opportunity to do something.

I have also found myself just engaging with people more—newcomers and strangers—saying hello, how are you, welcome. I feel like I am invested in helping the community grow and foster good relationships with everyone.