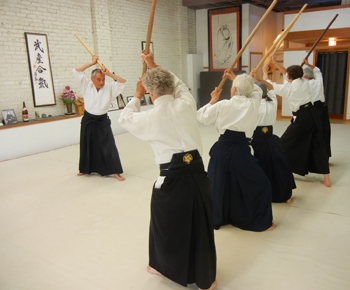 In harmony with Zen, Aikido can become a powerful practice in mindfulness, focusing on keeping the peace rather than disrupting it.

Ron Wada, a fourth-degree black belt with 16 years of experience teaching Aikido, has held Zen and Aikido workshops for beginners alongside Zen Center teachers at Tassajara and City Center. His classes emphasize “body control, dynamic movement (tai-sabaki) and experiencing the joy of training.”

“… like Zen, Aikido is worthy of lifelong study—
a way of life.”

Amity: What drew you to Aikido? Has your attitude and/or impression of Aikido changed since you began practicing it?

Ron: I began training with the hope of feeling better and more confident about myself physically. I was timid as a child and always felt intimidated by bigger, stronger, aggressive guys. I didn’t want to hurt anyone, but I was aware of how my life and my thoughts were distorted by my fears. I couldn’t articulate it this way at the time, but this is what I see in retrospect. I chose Aikido because it offered a way of developing skills that did not involve the destructiveness of punching or kicking, yet could still be effective. I was also attracted to Aikido because it offered a vehicle for me to connect with my cultural heritage and to discover meaning in small memories and experiences from my childhood. My attitude toward Aikido has evolved from those initial goals to where I now understand that, like Zen, Aikido is worthy of lifelong study—a way of life.

Amity: Could you give a brief history or reason why Aikido was developed?

Ron: Aikido is a relatively modern martial art based on other, older arts. It was initially developed in Japan by Morihei Ueshiba (referred to as O-Sensei) over a period of years before, during and after World War II. O-Sensei trained in many martial arts, and in a flash of inspiration, realized that his purpose in life was to create this art of conflict resolution and reconciliation and teach it to the world. In his words, “Aikido is not a way to fight with or defeat an enemy; it is a way of reconciling the world and making human beings one family.”

Amity: Can you briefly explain how Aikido compares to other martial arts? 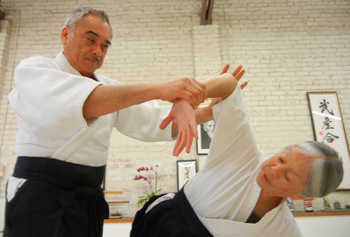 Ron: Aikido “borrows” techniques or movements from several arts, including sword (ken-jutsu) and jiu-jutsu, but modifies them in ways to make them control oriented rather than destruction oriented.

Amity: Are there uses for Aikido in modern life as a type of self-defense or way to protect others, or is your practice more focused on the meditation aspects of the practice?

“Aikido reawakens that [somatic knowledge] dimension, and opens doors to important information and knowledge that we did not know existed.”

Ron: In my experience, despite the images projected in film and television, video games and other media, if you live a normal life it is extremely rare today to have to defend oneself physically from an attack of some sort. One of the immediate benefits of Aikido training is that you learn to distinguish a real threat from an imagined threat (and the vast majority are imagined). A much more common and extremely beneficial experience is that you take an unexpected fall, and your Aikido training allows you to fall skillfully and avoid or minimize injury. I’ve discovered that Aikido and meditation are natural partners; they complement and work well together to integrate mind, body and spirit. These words have become a cliché to describe many practices today, but they really do apply here.

Amity: If Zen is a solitary practice but Aikido requires a partner, what is gained through practice with another person?

Ron: Practicing with a partner is the element that is most commonly missing from the practice of meditation, yoga and beginning Tai Chi. It introduces the crucial dimension of relationship to others that is so much a part of modern life. Those relationships provide important feedback. They serve as a reality check to tell us, in many different ways, both verbally and somatically, how we are doing. They also give us great clues as to what adjustments are needed and what reactive patterns dominate and control our lives but would otherwise go undetected. We must physically touch and be touched by our training partners, and learn to connect with them in a controlled and very grounded way, and be ready to respond to what is happening moment by moment. If done at anything approaching normal speed, this awareness practice can be quite intense.

Amity: Why is Aikido referred to as “moving Zen”? 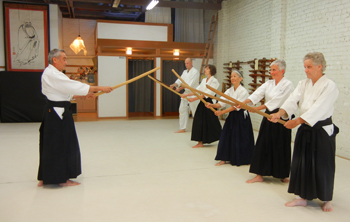 Ron: I think this is an exaggeration, and a mistake to equate the two. Aikido could be a form of moving Zen if practiced with that intent. It’s a question of “kokoro,” what is in your heart. If practiced without the proper heart/mind/intent, Aikido can be as brutal and destructive as any other martial art or form of combat. The ways that we can fool ourselves are infinite, and zazen helps us to identify each one of these as they arise.

Amity: Do you think that those who practice zazen find it easier to transition into Aikido?

Ron: There are many factors involved, but in my experience the physicality of Aikido training is a bit of a shock (and hopefully liberation) for people who are accustomed to sitting meditation. In zazen the net effect is to de-emphasize the body, and the somatic knowledge it contains. Aikido reawakens that dimension, and opens doors to important information and knowledge that we did not know existed.
__________