In the peaceful rural setting of Green Gulch Farm, Reirin Gumbel will lead the workshop Don’t Just Sit: Knit! Knitting as Spiritual Practice (Sunday, August 11, with Emila Heller). Recently she answered some questions about spinning, another craft she teaches. 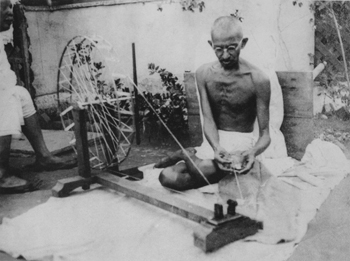 In the last century we saw India’s spiritual leader Mahatma Gandhi use his spinning wheel daily, and encourage its use as a liberating practice. Old spinning wheels often appear as ornamental pieces in contemporary homes. Here in our Zen community, we are privileged to know spinners working their craft today!

Excited by the prospect of the real touch and feel of actual spinning, we asked Reirin Gumbel to share something of her experience with her craft.

Kogan: Is the art of spinning difficult to master?

Reirin: The actual process of turning fiber into yarn is very easy—you are simply twisting some fibers together. One can learn to spin comfortably in a few hours, but as with anything, one will never be done. Even masters keep practicing and find new ways to perfect their skill.

Kogan: Where did your knowledge of and skill with spinning originate?

Reirin: As a child in Germany I witnessed the farm women spinning. They were still making their own dowry from flax and sheep wool. It took a long time to make a garment or household item, and I never thought this was something I would want to do.

Many years later, as a Waldorf teacher, I needed to guide third-grade students in this process from raw fiber to finished product, and learned spinning on a spindle from a parent during a board meeting. A friend gave me her spinning wheel that she was not using any longer as a show-and-tell item for the class. I sat down and transferred my new skill to the wheel, which was surprisingly easy. Right away, I felt the deep calm that was familiar from meditation, and I knew that I had found something I would never give up again.

“I felt the deep calm that was familiar from meditation, and I knew that I had found something I would never give up again.”

Kogan: Are you familiar with the story of Arachne and Athena? Apparently the ancient Greeks viewed the art of spinning as a gift from the gods. Why do you think spinning has this mystical resonance?

Reirin: Yes! Arachne was an exceptional spinner and weaver who was too proud of her skill and actually challenged Athena, the goddess of crafts. Athena responded by giving her the gift of eternally spinning and weaving as a spider.

Spinning was highly valued by all ancient societies, from Egyptian to indigenous American, since any fabric that was not felted needed spun fiber. However, up to the Middle Ages, only hand spindles were known, and it was a painfully slow process. Often, slave women and children were assigned the task.

At a Navajo spinning and weaving retreat in Shiprock, Arizona, I learned from the old teacher to give thanks to Spider Woman, our compassionate ancestor. With any project there is a lot of ritual involved, before the work can begin.

Spinning, like many fiber arts, can be a contemplative practice in that you tend to go inward, and this state feels comfortable and familiar to most people. 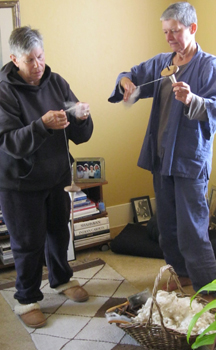 Kogan: Would you say something about the art and skill of spinning as Zen practice?

Reirin: Any spinner will agree that spinning is meditation. The ongoing movement of the hands drafting the fiber and the turning of the spindle can easily put you in a trance. At the same time, you need to concentrate on the fiber triangle in order to have the right amount of fiber going into the twist. It is a quiet art and is usually done in silence.

For me, the simplicity of the finely crafted tools and the beauty of the raw fiber and the finished yarn is equal to that of other Zen arts. Sometimes a group of spinners work on a project called “From Sheep to Shawl,” where you have a direct experience of interconnectedness, which is awesome and extremely satisfying.

Kogan: Are there any more thoughts about spinning or your workshop that you would like to share with our readers?

Reirin: As a member of the Ecosattva group here at Green Gulch, I am interested in using local and sustainable materials. The fleece was purchased from Windrush Farm near Petaluma, and the spindles are made from reclaimed wood by a local craftsman.

Knitting as Spiritual Practice in August is one of a series of fiber arts offerings, with Weaving and Felting projected for next year.

We focus on the meditative and calming aspect of spinning or knitting activity, and will give participants ample time to experience the restorative quality of a retreat at Green Gulch. We have had experience conducting similar retreats at Jikoji Zen Center, and we think Green Gulch is the perfect place for this. Also, it is possible to make the day at Green Gulch a weekend craft retreat by booking a room in our guest house.
______________________

Join Reirin to learn more about knitting on August 11.