There is more to bees than meets the eye. Beyond fulfilling the critical role of pollinating our crops and providing us with honey, a bee colony can offer a glimpse into a world with its own social order, its own rhythm and its own sense of interconnectedness. To former San Francisco Zen Center beekeeper Michael Thiele, there is an entire universe of untapped knowledge and wisdom to explore. He has turned apiculture into an exploration of this universe, an exploration that is informed both by his Zen practice and nearly a lifetime of beekeeping in both California and Germany. 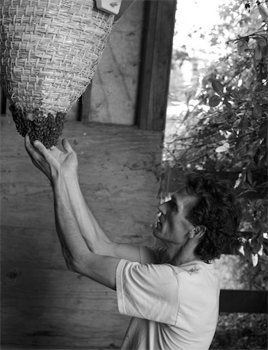 Amity: Who or what in your life has inspired you to study and care for bees?

Michael: I had dreams about bees during a practice period at Tassajara, and the following spring a bee swarm landed at my house at Green Gulch.

Amity: You use the term “Bien” a lot in your videos and website. Can you describe what a Bien is?

Michael: To call the Honey Bees “Bien” restores the old understanding of the hive as one being. The modern biological term for this is super organism: the multitude of all individual bees constitutes one being. In addition, the notion of the “Bien” describes the emotional aspect of this oneness and enables us to perceive it in its individual personality.

I think it is important to return to this understanding in a time when contemporary beekeeping approaches the bees as if they were a machine with interchangeable parts.

Amity: Has your understanding of the nature of bees and their behavior encouraged their well-being and production levels?

Michael: Once apiculture is inspired by a bee-centered approach, the natural health of the Bien can be restored without artificial manipulations or chemical treatment.  The global environmental crisis requires a radical change from production-oriented beekeeping towards an approach that honors this animal’s basic rights and needs. We also should remember, our well-being depends on theirs!

Amity: How did you come to study Zen, and has it informed or enriched your beekeeping practice?

Michael: Life and death brought me to Zen Center. For me, my Zen practice and decision to live with bees mutually inspire and inform each other. Zen seems to be the framework for studying the Bien, and a Bien has qualities of a riddle and a koan—it merges paradigms similar to how modern physics offers the contradicting concepts describing light as wave and particle. The Bien often makes me think of the teaching “Harmony of Difference and Equality.” 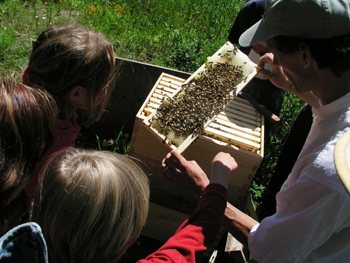 Amity:  Has studying the behavior of bees informed your deeper understanding of human nature or communities in general?

Michael: Bees have been central in ancient cultures and monasteries. To study and observe the Bien can be very inspiring, especially when we examine the sense of self and the interdependency of all parts within and without the Bien.

I think bees can inform our practice and become an encouragement to leave home. That’s what swarming of the bees in the spring is about: leaving home, leaving their precisely-defined nest location and taking the risk to fly into the unknown. It is amazing to witness this event and to be exposed to this faith and trust of the process of moving through the unknown! And finally, a new home is found.

In ancient Europe, this process was depicted on tombstones, describing the dying and reincarnation process.

Amity:  A description of your workshop says that “as bees became a commodity of modern apiculture, a deeper meaning and understanding of their true nature was lost.” Can you explain how bees were once understood better before they were more commonly viewed as a commodity?

Michael: In ancient cultures and myths, bees play a central role. In Central America, bees were perceived as the keeper of time and the integrity of the universe. In Scandinavian mythology, bees were at the base of Yggdrasil, the tree of life. Honey was considered a sacred substance and, in many cultures, it was only used as medicine or in ceremonies. It was not allowed to be sold.

Amity:  You grew up in Germany, working on a farm there and studying bees. Can you explain the different attitudes on beekeeping in Germany compared to America?

Michael: Interesting topic. Cultural differences between Germany and the US are subtle.

Europe has more small-scale beekeepers, using a wider range of hive designs. This comes with the cultural and regulatory reality of allowing bees to build their own comb, where, in the US, around 95% of all managed hives contain plastic implants (called a plastic foundation), which are introduced to manipulate comb growth. Politically, European beekeepers have been very successful in keeping GMOs out of the landscape, whereas, in the US, GMOs are not a strongly enough questioned reality.

On the other hand, recent innovations in regulating health and approaching the problem of Varroa Mites are coming from US beekeepers in the new “treatment-free” approach. German beekeepers are still holding on to an obligatory treatment paradigm.

Amity: What do you tell people who are afraid of bees and the possibility that they may get stung? 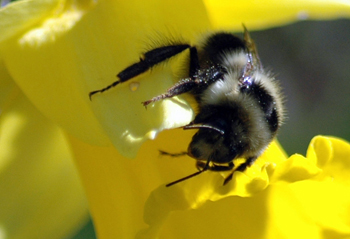 Michael: Unfortunately many people who get stung by a yellow jacket think it was a bee, when the two are very, very different. Yellow jackets are warriors and carnivores; bees are nectar loving and enjoy a vegan diet.

There are some basic rules for approaching a honeybee nest, but most importantly, one needs to be guided by one’s comfort level. Bees are very sensitive, and the more relaxed we can be, the more at ease the bees will be.

To see Michael move a swarm of bees with his bare hands, watch this video.

More information about Michael’s services can be found at his website, Gaia Bees. Michael is also co-founder of The Melissa Garden in Healdsburg, CA, one of the first Honey Bee Sanctuaries in the US, which serves as an innovative apiary and global resource center for biodynamic and holistic apiculture. He was recently featured in the documentary Queen of the Sun.

Follow this link for more information on Michael’s workshops and classes at Green Gulch Farm.