The Buddha’s Birthday Celebration at Green Gulch is a spectacular annual event, which offers children the opportunity to take part in a live performance and offers parents an opportunity to fill their children’s imagination with the story of Buddha’s birth.  The celebration includes a procession, a pageant and a picnic. 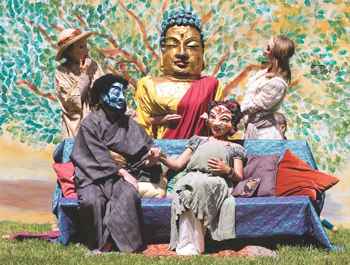 The pageant is a performance of a poem written by poet and former Zen Center Abbot Zoketsu Norman Fischer, which he based on a classical Sanskrit poem and wove in contemporary idioms and references to Green Gulch. Local artist Annie Hallat created the extraordinary masks and costumes that make the event a feast for the eyes.

Green Gulch Tanto Jeremy Levie has been preparing for the pagaent – casting roles, lining up musicians, and, in a spare moment, taking an interview with me. Jeremy began acting in grade school and continued to be involved in theatre through college, acting and directing at Yale College. Before submerging himself in his Buddhist training, he was a founding member of Unconditional Theatre, a San Francisco theatre company.

Sachico: The pageant has become an annual ritual that has been going on for some 25 years now. What do you think makes it so memorable?

Jeremy: Part of it is the spectacle. Annie’s masks and costumes, often in themselves, are little works of art. It is a fabulous spectacle.

And, Zen practice in the west has grown up largely around the individual seeker, often the adult, who comes to practice out of their own personal need for religious experience or meditation. This can provide tremendous vitality to the practice, but at the same time makes it hard to share with kids. The pageant offers a way for parents who have a relationship with Zen practice, in a very personal way, to share something about it with their kids. So it is very accessible, lively, friendly, but meaningful. There are teachings in the poem which serve as a meaningful introduction or sharing of the tradition. For parents who have an interest in Buddhism and want their kids to be exposed, this is a playful, fun way to do that.

Sachico: What are some of the themes and messages that parents want to share with their children?

Jeremy: To begin with, simply the exposure to the Buddha as a figure of enlightenment, joy and peace. Some parents want to share with their kids the Buddha as an archetype, a dimension of human life, of someone who is devoting t 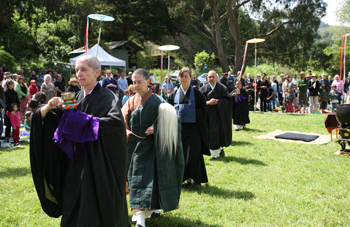 heir life to the happiness, peace and wellbeing of all beings. Then there are ways that that message is manifested in the poem, for example the transformation of beings from fighting to being peaceful together — very simple messages.

Some other traditional messages in the poem are the way that we are often afflicted by being wrapped up in ourselves and that there is something about the Buddha’s message that can free us from being locked up in ourselves. This one is a little more sophisticated for a small child to grasp. There is a line from the poem that says “people are sweltering in the humidity of desire,” which we sometimes portray in a desert scene. This is a very basic Buddhist teaching that suffering comes from a kind of craving or thirst or desire. This is a message that very young kids might not be prepared to absorb fully, but parents might like to introduce this notion particularly when so much of the culture that our kids are being exposed to leans towards consumption. So many of the messages are about needing to have more, wanting to have more and only being happy if you have more. The play introduces an alternative message, which is that eimply following your desire for more and more does not lead to happiness. This is a message that parents want their kids to be exposed to.

Sachico: What makes this such a fun event for you to work on and to experience? 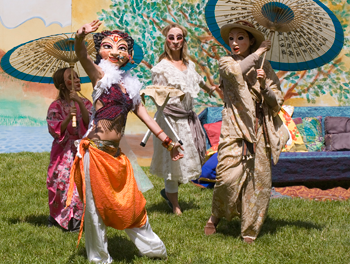 Annie always emphasizes about the pageant that I appreciate is the carnival quality of it. My sense is that our Zen practice can be very formal and highly ritualized. There are many prescribed ways of relating, of ceremonially and ritually doing things. That is a lot of the practice, but the pageant, which is really quite playful and uninhibited, offers the opportunity to turn this formality on its head.

I think in most traditional cultures there is a dominant religious influence with prescribed mores and behavior. The human psyche, being what it is, needs a little escape from that from time to time, where we can act out other parts of our being. These other parts of our being can provide a lot of vitality to our life when we relate to them appropriately.

I feel that is what is going on here for us with the pageant. It is a little bit of carnival for us at Green Gulch and for us at Zen Center. For those of us who live here — who in the formal aspect of our practice often wear dark, somber clothing and move in a ritual, formal, ceremonial way — the pageant lets those other parts of ourselves come out and allows us to embrace the playful, joyful, disorderly aspect of enlightenment. For me, that is what is so fun about it.

Buddha’s Birthday Celebration at Green Gulch Farm is on Sunday, April 28, with the Children’s program beginning at 9:15 am on the main lawn. There is a suggested donation of $35 for families. Children who wish to participate in the pageant are invited to attend rehearsal the day before on Saturday, April 27, from 1 – 5 pm on the main lawn, with the children’s parts rehearsing around 3pm. To find out more about rehearsal, please contact Jeremy Levie at 415-617-3961. We look forward to seeing you at the celebration.