On Friday, April 12 at 7:30 pm Shindo Gayatri, Zen priest and resident of Thiruvannamalai, India, will be presenting a slideshow on the effort being made by some SFZC Zen teachers and students to help Zen find its roots again in India. The show is open to the public and is free of charge, however there is a suggested donation of $10 for dinner. 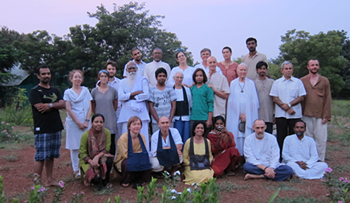 Senior Dharma Teacher Ryushin Paul Haller travelled to South India with priests and monks from San Francisco Zen Center. At Thiruvannamalai an ashram was turned into a Zen Center offering Zen practice for a full month and a half, culminating with a Sesshin. Ryushin Roshi conducted a ceremony on the land where Seizanji Zendo is to be built. A donation of plants was received and a hedge was made along the fence.
The group travelled to Fernhill – Ooty in the Nilgiri Hills – The Blue Mountains. Narayana Gurukula Fernhill, an ashram where Guru Nitya lived, was offered to Ryushin Roshi and his students to use as a practice center. The grand finale of the trip was when the group unexpectedly joined an event attended by HH The Dalai Lama. 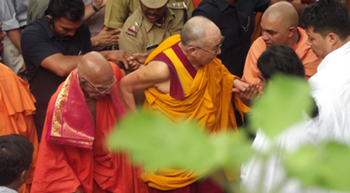 HH The Dalai Lama was invited to Sivagiri, the mother temple of Narayana Gurukula, where he gave a proclamation message, inaugurated the 80th pilgrimage walk at Varkala – Kerala, and planted a tree.