March 27, 2013
How to Become Bread – An Interview with Mick Sopko of Green Gulch Bread Bakery
Features

Mick and his assistant, Mary, start the day in the Green Gulch Bread Bakery at 4 a.m. on a Thursday. By 10:00 a.m., they have full racks of new loaves. By 10:40 a.m. most have disappeared–put away or distributed to the community. Mick and Mary are still at work, cleaning up. “Thirty per cent of this work is housekeeping,” Mick says cheerfully. Later, at 1 p.m., generous with both his time and his bread, he sits down with me for an interview. 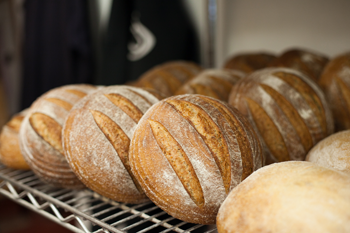 Kogan:  Were you interested in bread making at Tassajara when you were there in 1979–before they said, “We’d like you to help bake the bread?”

Mick:  Not particularly. What I was interested in was the position of bread baker, because it was kind of out there, y’know. [laughs] It was doing weird hours, and I liked that kind of thing–at the edge of the regular community activity. It seemed like it was appropriate for me to do at that time. I had baked bread a little bit before. It seemed like a wholesome activity. And it was creative, using my hands. I’ve always done that in my life. I just liked the vibe of it, but I’d never thought of myself being a baker ever in my life. One thing led to another, and before I knew it, I turned around, twenty years had gone by, and I said, “I guess I’m a baker.”

Mick:  Yes, we do that about five times a year, and we’ve been doing it for five years. Fifteen people is about the maximum on a Saturday, from ten in the morning to three in the afternoon.  It’s filled just about every time we do it, and it’s still interesting for me to do, because the people are always different and we always do it in a different way. Something I’ve noticed is that people really love to get their hands on the dough. That’s the main thing.

Kogan:  Speaking of dough, I like the bread-y smell in here– 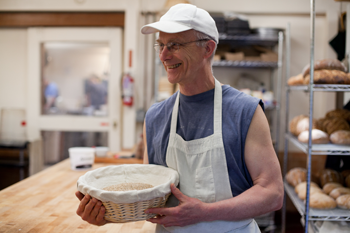 Mick: Not so much now [1:30 pm]. If there’s going to be a smell in here, it’ll be here some time in the morning. Especially in the growing season, every Wednesday the community goes down to the farm and we have community work from 6:00 am or so ‘til breakfast time–7:00. Often the people coming up will say, “Ah! The bread is baking now.” The smell can be pretty powerful depending which way the wind is blowing.

Kogan:  In your recent City Center Dharma talk, you spoke about your bread starter.

Mick: The reason bread can rise is because of a process of fermentation, which is a chemical process and a physical process which takes place in the presence of yeast, a micro-organism which is all over the place. You can buy yeast packaged in a store, but that’s a recent invention–maybe 1850s or so in Germany.  So what did people do before that? People have been baking bread for 6,000 years. They figured it out–they might not have used terms like “microscopic” or “micro-organism” but they knew that when you basically combine flour and water, after a while something happens all by itself.  It would start to bubble. It would develop aroma and flavor.  You don’t have to do anything, just combine the ingredients in a certain way at a certain temperature and manage it in a minimal way, and you build a colony of micro-organisms–yeast and bacteria. 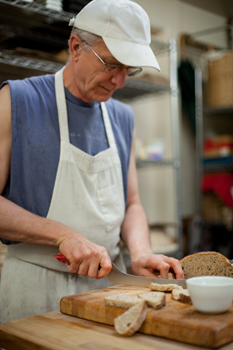 er is. It’s a living thing, and you take care of it. For some people it’s like a pet, or it’s like a member of your family. And you feed it; some people feed it three times a day, if that’s what they want to do.  And they pass it on from generation to generation. That’s why people say, “Oh, my starter’s 100 years old, from the Gold Rush days. My great-great-grampa used this when he was panning for gold up there.” And if those old-timers wanted bread or pancakes, they carried their leavening agent with them, took care of it, and put it in their packs.  When they needed it, they could take it out and use it, refresh it, and keep it alive. There’s a mystique about it, too.  “How old is your starter?”

It’s sweet that people have been taking care of something for that long a time, but you can have a starter a month old that’s just as good as a starter 200 years old. What you want the starter to do is provide leavening for the product and give it flavor, and there are many ways to manipulate it to get different flavors.

Kogan: Do you have an altar around here somewhere with a little bowl of starter on it?

Mick: I don’t, but that might not be a bad idea. That’s an appropriate reverence. Absolutely. I mean, I pray to the gods of baking. That figure up there–[brings it down] this figure came from a friend in the Slovak Republic. She’s made out of corn husks, and she’s holding her loaf of bread.  That’s very important in that part of the world. I pray to the oven spirits–do you want to hear the prayer?

Mick: O potente forno . . . [words in Italian].  It’s an Italian oven, so I thought it would be good to do it in Italian.  What it means is: “Oh mighty oven, please accept our humble loaves and bring them to their full potential.”

I can’t tell you how many times that intense prayer directed toward the oven has miraculously saved some very, very humble loaves. For real. 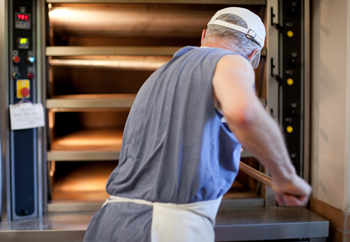 Kogan: Wow.  Well–I have a very light-hearted question from a friend who knew I was going to talk with you.  If you were a bread, which–

Mick:  which bread would I be.  I would like to be pain au Levain.  French–meaning leavened bread, that’s all it means.  It’s what we would call sourdough.  The ingredients are just flour,  water, salt. It’s the simplest–more simple than a baguette. It’s the quintessential, original French bread, not the baguette. The baguette came from Vienna. Anyway, since pain au Levain is so simple, there are many ways to mess it up, or make it wonderful.  That’s the kind of bread I’d like to be.

Mick:  Or a circle–just a simple circle, but right away you look at and say, “Not yet.”

Kogan:  Let me ask about that print behind you on the wall–it says “RISE”.

Mick:  Yes! Somebody gave me that from the Bread & Puppet Theatre. And this is the Suzuki Roshi quote [also on the wall] that I gave at my City Center talk, from the chapter “On Repetition”:

(That’s what we want to do here–those are the two things: look good, taste good.)

Actual practice is repeating over and over again until you find out how to become bread. There is no secret in our way. Just to practice zazen and put ourselves into the oven is our way.

And that really rings true for me in terms of bread-making. There’s nothing glamorous about it. It’s hard work.  Nobody’s ever going to get rich at doing it, but there’s a feeling of connection with some fundamental forces, or energies, or spirits, or qualities, or something like that, which at least in Western culture go way back. They run deep. People respond to bread in a certain kind of way.  The smell of bread, you know?  And it’s a metaphor for–you name it!

And Suzuki Roshi–what did he know about bread? What could he have possibly known about bread–living in Japan.

Anyway, it’s helped me a lot, working in this area, because it feels real and wholesome and it’s a way to communicate with the community. People respond very well to it. I feel it makes people feel good. 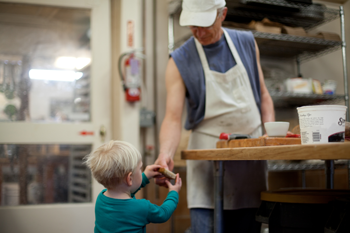 Kogan:  Yes. The community loves the bread. And it’s amazing. You’re the guy who makes it.

Mick:  [laughs]  It’s no big deal. Just keeping it going is important, especially in this day and age.  And that’s why I like so much of how Zen Center works, giving high value to handwork and fundamental work–carrying water and firewood. It’s easy to lose sight of those kinds of activities as the contemporary world becomes more digitized, and in a way cerebral. Yeah, I’m happy to maintain that physical tradition in whatever way I can. I personally feel
it’s important.

Mick Sopko leads the Fundamentals of Bread Baking workshops at Green Gulch Bread Bakery. Follow the link for more about this offering.