In Honor of Earth week, San Francisco Zen Center invites everyone to join us for the screening of Green Fire, Emmy Award Winner for Best Historical Documentary. 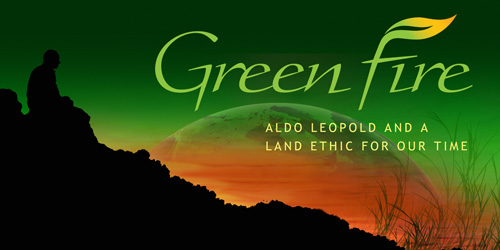 “There are two spiritual dangers in not owning a farm. One is the danger of supposing that breakfast comes from the grocery, and the other that heat comes from the furnace.  To avoid the first danger, one should plant a garden.”

Green Fire is the first full-length documentary film ever made about legendary environmentalist Aldo Leopold. It highlights Leopold’s extraordinary career, tracing how he shaped and influenced the modern environmental movement. The screening will be followed by a discussion with three of Green Fire’s filmmakers: Steve & Ann Dunsky and Stephen Most.

Steve & Ann Dunsky have written, directed and edited films and videos for more than twenty years. As producers for the U.S. Forest Service, their programs cover a wide range of conservation issues. In 2005, they produced the award-winning history of the Forest Service called The Greatest Good. In 2010, they completed an independent documentary called Butterflies & Bulldozers about a nationally and historically significant conservation in battle in the San Francisco Bay Area, where they live. Documentaries Stephen Most has contributed to as a screenwriter include five Emmy-winners and four Academy Award nominees.

Green Fire provocatively examines Leopold’s thinking, renewing his idea of a land ethic for a population facing ecological challenges in the 21st century. Leopold’s biographer, conservation biologist Dr. Curt Meine, serves as the film’s on-screen guide. The film draws on Leopold’s life and experiences to provide context, then explores the deep impact of his thinking on conservation projects around the world today. Through these examples, the film challenges viewers to contemplate their own relationship with the land community.

Green Fire utilizes photographs, correspondence, manuscripts and other archival documents from the voluminous Aldo Leopold Archives as well as historical film and contemporary full-color footage on location, including landscapes that influenced Leopold, and that he in turn influenced. The film also features commentary and insight from some of today’s most recognized scholars and conservation leaders, including: three of Aldo Leopold’s children (Nina, Carl, and Estella), environmental writers, scientists, humanities experts, public policy makers, and non-profit groups inspired by Leopold.