A Calligraphy Show and Demonstration 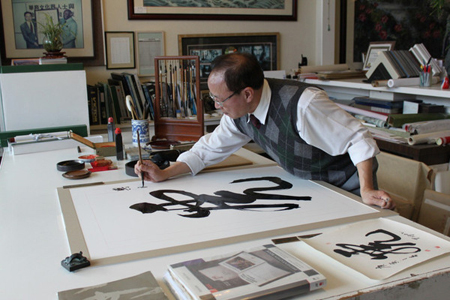 “Painting of
the Heart”

Chinese calligraphy, or Shu Fa (the way of writing), is a traditional art and discipline that has been practiced in China since ancient times. It is both a concentration practice for the mind and an artistic expression of the characters and feelings of the practitionerís heart.
“Calligraphy is the painting of the heart and mind,” Master Mac Ming Chan likes to quote a traditional saying. We are delighted to have Master Mac Ming Chan join us for an evening in which he will show his artwork, demonstrate the art, and talk about the history and styles of Chinese calligraphy.

Master Mac Ming Chan was born in the Santou city of Guangdong province in China to a scholar and Buddhist family. He started to study calligraphy at a very young age and trained extensively with Grand Master Mai Hua San, a renowned master of calligraphy in China. Master Chan moved to Hong Kong in the 70’s where he won many prizes for his art work and became an esteem artist and teacher of calligraphy in his own right. His work expresses a rare kind of beauty which integrates gentleness and strength as well as simplicity and depth. His art has been widely recognized in China, Hong Kong and overseas. He currently resides in the San Francisco Bay Area.