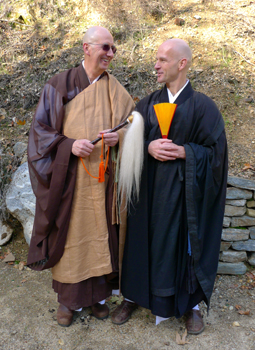 The 90th practice period at Tassajara was marked by having the largest intake of new students that anyone could recall – 23 people sat the traditional five days of tangaryo at the end of September, a group consisting of fully half the members of the practice period; one ‘new’ student had sat with Suzuki Roshi back in the sixties, and there was also one person returning for her first practice period in forty years.

Several long-term senior students had also recently departed, and many of the senior staff were new, so there was a real sense of transition and inexperience as we launched into the monastic schedule – especially when the Abbot, tanto and director all left for the SZBA conference a few days after the opening ceremony. However, many of the students had been working together during the summer season, and the group has felt tight-knit. 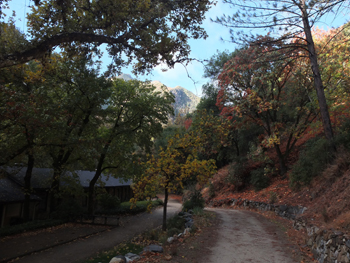 Abbot Myogen Steve Stücky began with a study of the Satipatthana Sutta, grounding the monks in body and mind awareness. With the arrival of Sojun Mel Weitsman Roshi at the end of October, the focus switched to studying Suzuki Roshi’s talks in Branching Streams Flow in the Darkness. It was a gift to have Sojun Roshi offering his insights, as not only did he help edit the book , but he was also present when the talks were given at Tassajara in 1970. Sojun Roshi was also on hand to dedicate the new ovens which were installed in the kitchen; this was apt as he had performed the ceremony the last time it was needed, in 1999. There was another distinguished visitor right before Thanksgiving, as former Abbot Zentatsu Richard Baker came to spend a couple of days sitting with the monks to observe first-hand how the schedule and the forms have evolved over the years. 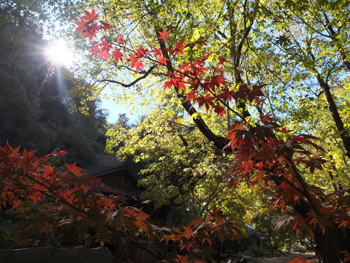 As always, the weather at Tassajara offers many extremes: at the beginning of practice period, it was in the 90s for many days, continuing warm through October, so that the leaves did not begin to turn until November. There have only been a couple of frosts so far, and there was little rain until the very end of November, when we had a series of storms coming through: twice in three days, three inches of rain fell in a matter of hours. The moribund creek roared into life, and Cabarga Creek began flowing, to the delight of those who had never seen it run before. The mountains took on new colours, and the plants looked invigorated by the soakings.  In other ways the monastic life offers its usual facets: many periods of zazen, oryoki meals, services and ceremonies, study, classes, lectures and sesshin: there was a five-day sesshin in October and nine days in November; Rohatsu will be held, as usual, later than in other places, starting December 9th, for seven days. Special events have included Sejiki, where we call forth the hungry ghosts and remember the dead; the traditional mid-practice period event, a.k.a. skit night, the chance for the monks to break into song, crack jokes and generally let their hair down; and of course, Thanksgiving Dinner, perhaps the highlight of the constantly delicious offerings by the kitchen crew.
The traditional culmination of the three months, the shuso dharma inquiry ceremony, took place on the 18th, and the practice period closed on the 20th.