December 12, 2012
Honoring the Path of the Warrior: A Journey of Healing
Features | Programs | Zen Practice

What does it mean to honor our veterans?

There’s more than one way, of course, but Lee Lesser and Chris Fortin provided an extraordinary example at Greens Restaurant on Veterans Day, November 11, 2012. 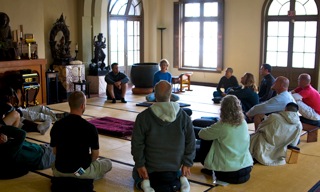 The organization they founded, Honoring the Path of the Warrior (HPW), has become a means of profound healing for veterans grappling with the aftermath of war and reintegration into civilian life.

While many civilians may not know a veteran personally, most of us have probably seen at least one article about the shocking rates of PTSD and suicide plaguing the military. In June of this year the Associated Press reported that active-duty suicides outpaced war deaths for the first time, at the rate of nearly one suicide per day, an 18 percent increase over 2011, and Army suicides have spiked in the months since. But active-duty statistics pale in comparison to those of vets: for every soldier killed on the battlefield this year, about 25 veterans die by their own hand. Veterans commit suicide at a rate of one every 80 minutes—that’s more than 6,500 veterans each year, greater than the total number of soldiers killed in Afghanistan and Iraq combined. 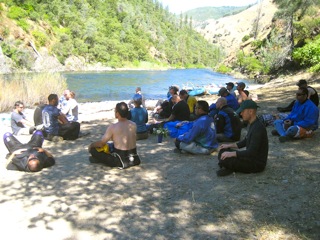 According to a New York Times article in September, only about 10 percent of the veterans receiving mental health care through the Department of Veterans Affairs (VA) fought in Iraq or Afghanistan; the vast majority of those treated are still Vietnam veterans. The problem is not just one of insufficient care for returning vets but of a reluctance on the part of those vets to seek treatment. A host of factors compound the situation—not only are there tremendous delays and paperwork involved in applying for VA benefits, but the requirement that veterans demonstrate their level of disability is a huge obstacle for those who don’t consider themselves disabled. Seeking help carries a great deal of stigma in the military mindset, and the strategies a soldier uses to cope with war don’t change easily after the tours are over. As veterans struggle to keep intense and overwhelming experiences at bay, feelings tend to go by the wayside as well. Vets who can’t identify and admit the help they need will never seek it. 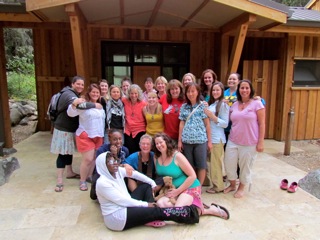 In 2007, under the fiscal sponsorship of San Francisco Zen Center, Lee and Chris began offering a program to address this epidemic of suffering in news ways. They created a refuge for veterans to share their stories, develop mindfulness practices, and discover a life of service beyond the military. Programs have included white-water rafting and rock-climbing trips and two retreats specifically for women at Tassajara. On November 11 this year, the gathering of veterans’ families and current and potential donors at Greens listened with rapt attention (and often with tears) as nine veterans, three women and six men, described in very raw terms the challenges they have faced and the profound transformation that HPW has made possible in their lives where other approaches had failed to make a difference.

Energized and moved by these powerful stories, the group brainstormed ways to expand HPW’s reach. Help is needed on many fronts, but the most pressing is funds to help grow the organization to serve more veterans. All of HPW’s retreats are offered free of charge (including transportation to and from the retreats). Lee and Chris both have full-time jobs and their work at HPW has been an unpaid labor of love. A recent donation finally made possible the hiring of a part-time development manager, Army veteran Dyan Ferguson, last year. With greater funds and manpower, the potential to replicate HPW’s work across the country is enormous. The program’s proven success is ready and waiting to expand and is desperately needed to help the increasing number of returning soldiers. To learn more about HPW and how you can get involved as a volunteer or donor, please visit www.honoringthepath.org.