October 30, 2012
We Consider How This Food Comes To Us
Features | Zen Practice

As a continuation of Food Awareness Month at Green Gulch Farm, the Ecosattvas have been discussing something that California voters will vote on at the polls next Tuesday: Genetically Modified Organisms (GMOs). 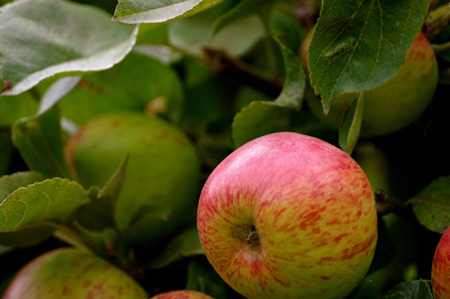 “We reflect on the effort that brought us this food and consider how it comes to us.” Photo of apples at Green Gulch by Claudia Hennum

A YES vote on Prop 37 would require all GMO food be labeled, with the exception of alcohol, certain meats and restaurant food. This would be the first labeling law of its kind in the United States, although over 60 other countries (including Russia, China and the European Union) have long had such legislation in place.

GMO food is produced using proprietary technology to alter plant DNA by introducing viruses or bacteria, as well as genes from other species, to develop different traits. The manufacturers of these seeds claim such benefits as pesticide- or drought-resistance, additional nutritional content and the capacity to feed a burgeoning human population. At this point, no long-term independent studies of the effects of this technology have been done since the laboratory processes are patented and privately owned.

Concerned farmers and scientists have found evidence that these genetic modifications have uncontrollable and unexpected impacts on other crops and the ecosystem in general. Impacts include increased dependence on the use of petro-chemical spraying as pesticide-resistant superweeds and pests evolve, and the narrowing of varietal diversity as GMO plants cross genes with non-GMO cultivars. Small farmers are disturbed by the consolidation and privatization of seed stock, as well as the clauses which prevent them from saving their own seed if they use GMO patented seed.

Prop 37 does not tell farmers to stop using this seed, but would require GMO labeling all the way to the grocery store shelf so individuals can know if their food has been genetically modified. Proponents believe this is a basic right to know issue that would give eaters the power of informed choice. They point out that if GMO products are harmless as the industry claims, then what is the problem with proudly labeling them as such and letting consumers vote with their informed purchases?

Opponents have spent over $35 million to simultaneously claim Prop 37 goes too far with regulatory burdens on farmers and others in the food supply chain, while also arguing that the labeling law doesn’t go far enough in documenting the amount of pesticides used in conventional, non-GMO foods. They feel that if people are concerned about GMO ingredients they can already buy USDA Organic labeled foods which do not contain any GMO elements.

A radio program recently hosted a debate between both sides of the Prop 37 issue, allowing both sides to articulate what they feel is at stake. It was followed by Michael Pollan speaking about the larger implications of the ethical food movement. You can listen to it here. 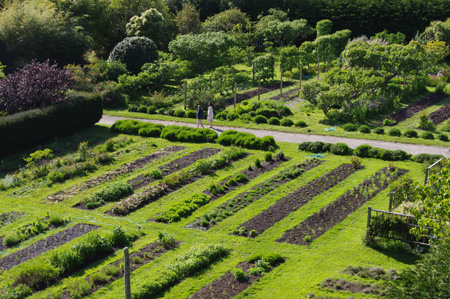 The Ecosattvas, a volunteer group of Green Gulch residents focused on saving all beings through eco-social actions, strongly endorse passage of Prop 37. This legislation is fundamentally in line with our Zen practice of bringing awareness to the myriad causes and conditions of our lives, as we are reminded each time we give voice to the meal chant. All eaters have a right to know what is in their food and make ethical, informed decisions about their own and their family’s health, as well as choices that benefit other beings and the planet on which we depend. We hope that Prop 37 is the beginning of a much larger, thoughtful discussion about the values manifest in how we care for the earth while nourishing our bodies.

We encourage everyone to find out more about this important issue. California is the largest producer of food in the nation, so what happens in this state often becomes the norm for the entire country. General information about GMOs can be found at the Wikipedia web page.

More about the Right to Know campaign can be found on their web site.

San Francisco Zen Center has a practice of not offering views that recommend how people should view social, cultural, or political issues, or how they should vote or for whom. Yet the issues involved are often close to the heart of how each person sees their practice integrating with their everyday life and ethical concerns. SFZC is a religious non-profit and aspires to be completely open and welcomes everyone to sit together in harmony, consider their deepest intention and act compassionately in the world. The views expressed here are not intended as representative of the wide diversity of the SFZC community.