On Wednesday, September 12, the Tassajara community planted a Santa Lucia fir (Abies bracteata) on an open slope just beyond the new retreat building. The Santa Lucia fir is the rarest conifer in North America, growing only in the Santa Lucia Mountains that surround Tassajara. 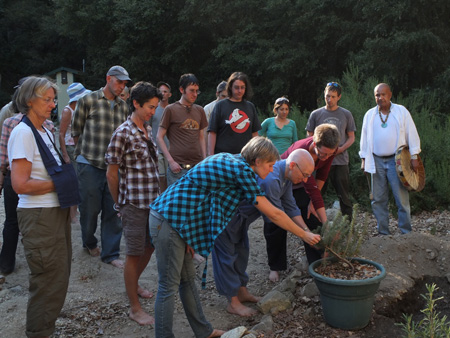 Diane Renshaw is at far left; Tihikpas at far right

This tree grows in two distinctly different habitats: inaccessible, steep, open rocky slopes, and comparatively moist canyon bottoms. Both types of habitat are relatively fire-proof, providing protection to this thin-barked tree in a landscape that is periodically burned.

Tassajara has long been hoping to incorporate this iconic tree into its native landscape plantings. This specimen was made available to Tassajara by Betsy MacGowan, whose tireless work on the trails throughout the Ventana Wilderness is appreciated by all who hike in the area. 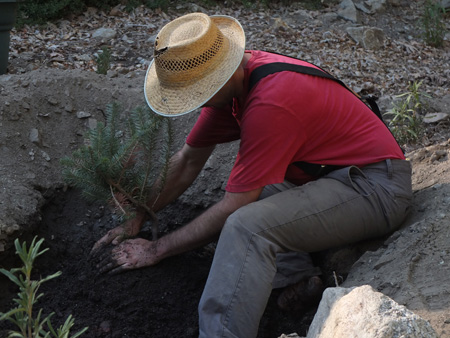 Tihikpas, an Esselen elder visiting Tassajara for a meeting of the Four Winds Council, spoke during the ceremony about the place of the Santa Lucia fir in the greater world that surrounds us all and led the community in offering prayers and chanting as the tree was settled back into Mother Earth. May these roots take hold and the leaves spread forth!