San Francisco Zen Center is pleased to present “River of Renewal” (Winner, Best Documentary Film, American Indian Film Festival). The screening will be followed by a discussion of the Klamath River tribes’ principle pikiawish, or “fixing the world,” and the Buddhist precept to save all beings. The film’s Emmy award winning filmmaker, Stephen Most, will join us for the screening and discussion. 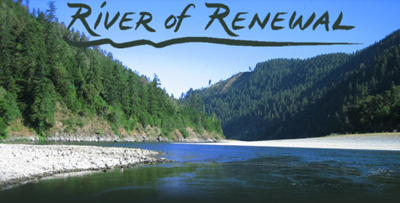 “’River of Renewal’ examines the water and wildlife crisis in the Klamath Basin – a bioregion larger than nine of the fifty states. The communities that harvest food from the Klamath Basin – raising crops and cattle, catching salmon in the river and offshore – have all suffered due to the lack of enough water to serve the needs of irrigation and fisheries alike.

“The crisis began in 2001 when the federal Bureau of Reclamation – responding to biologists’ warnings that the over-allocation of Klamath water was endangering several species of fish – cut off irrigation water that farmers and ranchers had long depended on. Irrigators responded with a dramatic civil disobedience campaign: a bucket brigade that carried federally banned water for a mile along Klamath Fall’s Main Street and into an irrigation canal. Their protest paid off during the election year of 2002. Circumventing the Endangered Species Act, Vice President Dick Cheney made sure that the farms and ranches within the federal Klamath Project got all the water they could use. That September, 80,000 spawning salmon died in the estuary. Also that year, more than 80% of the juvenile salmon died after reaching the mainstem of the Klamath River.

“In the years since then, a remarkable conflict resolution and consensus building process gained influence among the communities of the Klamath Basin. Eventually, they found common ground, recognizing that economic revival could occur only if ecological vitality were restored. The Klamath River tribes’ ethos of world renewal, or pikiawish, ‘fixing the world,’ now influences the entire Klamath Basin. The film shows leaders of different communities coming together to seek a way beyond economic stagnation, environmental disaster, and polarized politics.

“The search for common ground became urgent with the collapse of commercial salmon fishing along 700 miles of the California-Oregon coast in 2006. That year also, the licenses for the Klamath River hydroelectric dams expired. Settlement talks … led to a consensus on dam removal in 2008. Later that year, the dams’ owner, PacifiCorp, signed an agreement in principle … to remove all four of the hydroelectric dams on the Klamath. The greatest dam removal project in American history is in the works. ‘River of Renewal’ brings this issue to the nation’s attention with the intent that the Klamath Basin crisis culminates in the restoration of a once great river system and the return of wild salmon in abundance to the West Coast.” Film description is from River of Renewal web site.

“Stephen Most is a writer and filmmaker. He is the writer/producer of ‘River of Renewal,’ which tells the story of the crisis over water, wildlife, and energy in the Klamath Basin. Films he has written include ‘Oil On Ice,’ which portrays the controversy over drilling in the Arctic National Wildlife Refuge; ‘The Greatest Good,’ a two-hour history of the U. S. Forest Service; ‘A Land Between Rivers,’ a history of central California; and ‘Green Fire: Aldo Leopold and a Land Ethic for Our Time.’

“[Stephen Most has received several Emmy awards, including for the films] ‘Wonders of Nature,’ which he wrote for the Great Wonders of the World series, … ‘Promises,’ on which he worked as Consulting Writer and Researcher, [and] ‘The Bridge So Far: A Suspense Story,’ which he scripted. ‘Berkeley in the Sixties,’ which Most co-wrote, received an Academy Award nomination. …

“His book River of Renewal, Myth and History in the Klamath Basin, was published by the University of Washington Press in 2006.” Biographical information is from Green21 web site.