Our honeybee expert, Alan Hawkins, has sent us a fascinating update on the hives in the city and out at the farm. Alan teaches beekeeping workshops in both locations, though they are on hiatus until next year. Until then, enjoy this peek into the lives of the bees both in San Francisco and in foggy Marin!

“Dear honeybee enthusiasts, hope you are all well…Visited the hives at City Center and Green Gulch and what I see is dearth, which means a decline in bloom.  At CC we extracted several gallons of honey, but left some honey frames that the bees had not capped.  Very good bee flight from 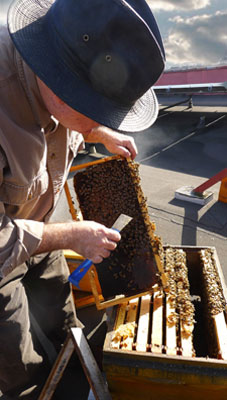 three of the hives, but the hive near the chimney has a serious mite problem. Treated three of the hives for mites including one and two that have less serious mite problems. Our most recent hive, facing Page Street, has really built up and produced about thirty pounds of honey, which we extracted Sunday…Marcia calls this the “young urban hive.”  Did not treat this hive for mites and it is full of bees and continues to make wax.  Although four of the hives have lots of bees and the queens are laying lots of new eggs, honey production has slowed down.  There might be another honey flow in august, but remains to be seen.  Right now it looks like an early fall.

“Dearth shows itself in a different way at Green Gulch. There is much less bloom and the temperatures have been lower.  The bees in the area are trying to rob each other, which means that bees wage war for the honey in certain hives.  One way that we see this is more bees on the landing board stopping and fighting off incoming bees from other hives.  Our weak, small nuc [nucleus hive] was completely robbed out of honey.  The four langstroth hives remain strong and are withstanding robbing and the increasing yellowjacket population…this is also true of the large topbar. The smaller topbar seems to have a smaller population and may be queenless, but this hive  has produced three new colonies this spring through swarming and splitting.  Four weeks ago I took the split home with me because it had overgrown the split box and needed to be separated.  The day after it arrived in my yard it swarmed into another small hive box and so there are now two healthy hives.  In June the small topbar swarmed on its own.  Treated the green hive for mites.  All hives have plenty of honey to tide them over the GGF winter/summer.

“All that has been described is not unusual.  Most of our hives are robust…even the ones with very noticeable mite loads.  Both apiaries produced honey and still have lots of honey in the hives to keep them fed into the fall. 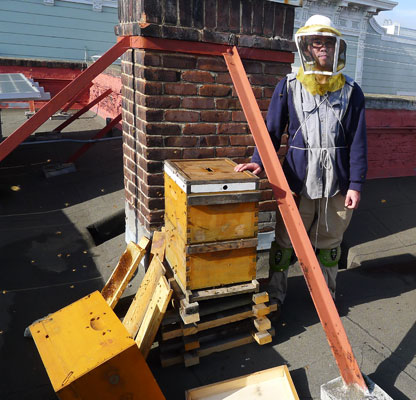 Images from an earlier harvest

“Next month we will take a closer look at the health of the queens with the view to see if they can sustain their colonies into the winter and the coming spring.

“Thanks to all of you for providing a loving human presence with the bees.  Yesterday at GGF, Anna andIi experienced a happy and curious group of school children visiting the apiary and the top bar hive with the window.  We were in the process of taking some honey comb off our newest hive to make room for the hive to balance itself when Holly and the children arrived and they were very happy to eat honey comb right out of the hive.  Even when the bees are sick and the weather is challenging, it is a joyful occasion for me to come and visit with you and the bees at City Center and Green Gulch Farm.”  -Alan Hawkins