The Dharma (Buddha’s teaching) abounds during the Tassajara guest season, manifesting as the tweets of baby canyon wrens, the rush of the creek, children’s laughter, and the sweet silence of morning. This summer is filled with opportunities for students and guests to hear and experience the Buddha’s teachings through workshops, Dharma talks, and classes. 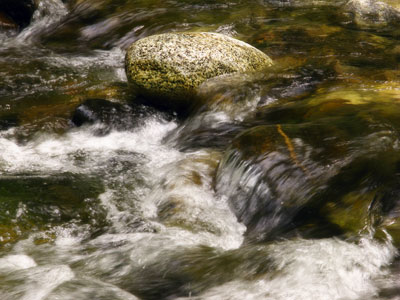 Senior Dharma Teacher Ryushin Paul Haller taught a poetry workshop in May and then spent three weeks at Tassajara meeting with students, offering a class on the Four Foundations of Mindfulness, and participating in the daily schedule. The tanto (head of practice) Greg Fain gave several classes on the Heart Sutra (PDF), which is one of the most widely chanted Buddhist sutras.

“I chose this sutra because the concept of emptiness is often misunderstood,” Fain said. “It doesn’t mean a void or vacuum. Emptiness means that everything changes and nothing has a distinct, separate existence.”

Later in the summer, Linda Galjian will be offering a series of classes on Dogen’s Genjo Koan. Several visiting teachers have given classes as well, including Gil Fronsdal who spoke about the Buddhist notion of “no self.” A handful of long-term residents will also be offering classes on such topics as generosity, the Eihei shingi, and the use of metaphor in Zen.

So far this summer, more than 20 retreats have been held on such topics as yoga; tai chi and Zen; cooking with tea; autobiographical improvisation and mediation; and relationships as spiritual practice. Several members of our Tassajara senior staff are co-leading workshops. In May, Judith Randall, the shika (guest manager), spent a weekend with guests hiking various trails through the valley and exploring the wildflowers and birds of the Ventana Wilderness. Tassajara Director Mako Voelkel co-lead a retreat on the healing power of yoga and Zen. Graham Ross, the ino (head of the meditation hall), co-lead a retreat with Dale Kent, author of Tassajara: Dinner & Desserts, where participants spent time learning cooking techniques, chopping and cutting fresh vegetables, and creating a meal in the storied Tassajara kitchen.

For more information about upcoming retreats, please visit our website.