A Shuso Ceremony at San Quentin

Built in 1851, San Quentin is Californiaâ€™s oldest correctional institution and the prison today, according to its website, houses â€œa reception center for new commitments, a parole violator unit, general population units, and a minimum security work crew unit. The state’s only gas chamber and death row for all male condemned inmates are located at San Quentin.â€

This well-known prison also houses a thriving Zen Buddhist sangha, where all are welcome, prisoner and â€œoutside personâ€ alike. The Buddhadharma Sangha, as it is known, has been meeting for 12 years. Each Sunday, under the leadership of Â Seido Lee deBarros, Jiryu Mark Rutschman-Byler, and Emila Heller, about 20 inmates and 5-10 visitors come together as one. Says Seido of the sangha, â€œWe sit, follow Zen forms, and discuss the dharma.â€

On May 20, a Shuso Ceremony was held to honor the head student, Kan Shin Mac McCartney, a gathering which held an extra layer of meaning as Mac had recently been approved for parole after 33 years at San Quentin. â€œThe Shuso is a down-to-earth person without guile,â€ said Seido of Mac. â€œHe was our Ino (head of the meditation hall) for a number of yearsâ€ and has always been â€œvery earnest, good-natured and competent.â€ 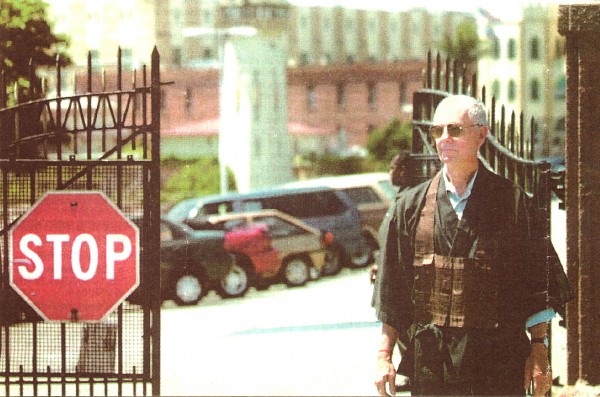 The ceremony followed Zen forms, with the inmates acting as doan ryo, leading the group in their various practice roles. Many former shusos attended from the outside, bringing thoughtful questions and kind words for the new shuso, including Sara Tashker, the most recent head student at Tassajara Zen Mountain Center.

Although Mac had taken Lay Ordination some time before, he was presented that Sunday with a new rakusu at the end of the ceremony, sewn with care by Emila Heller, as a gift from the supporters of the sangha.

The ceremony took place, as do the weekly meetings, in a multipurpose room near the Christian chapel, a room which serves alternately as Zendo, Mosque, and Jewish Temple for the prison population. As is custom during the ceremony, each person (inmates and guests alike) presented a question to the shuso which they considered meaningful. A few exchanges from the Buddhadharma Sangha:

What is the most difficult part of practice? Â This moment.

What is freedom? Â Here and now.

How do I speed up approaching Nirvana?Â  Donâ€™t be in a hurry.

Former shusos then offered words of congratulations to the new shuso, after which inmates hosted a celebratory lunch for everyone present. One inmate noted that â€œPeople take warmth and kindness like the air they breathe, [they] take it for granted, but in the ghetto there is just guns and drugs and no warmth and kindness,â€ indicating how astonished he was by the kind words he heard that day, saying he was particularly taken by these displays of sincerity.

“What has been most amazing to me about watching Mac, and part of what was so inspiring I think to the inmate Sangha members as well, was his intense vulnerability throughout this process of being shuso,” Jiryu said. “Quick to tears, soft with the staff, fully feeling feelings, allowing himself to be totally moved by the Sangha, to let his guard down completely, moment after moment – this doesn’t just go against the stream of human habit, human defensiveness, but goes against everything that prison life demands. Â In prison, it seems, there is tremendous pressure to be strong, and tough, and unmoved. Â So to see someone in that place manifest the confidence and clarity and strength of just the opposite is to receive a gift that is hard to put into words.”

Kan Shin Mac sent us his thoughts on his experience of this joyful, significant day:

â€œMay 20, 2012, what a wonderful day. The culmination of what had already been a wondrous practice period. As I sat atop the raised platform facing the Sangha, I felt so vulnerable and yet intimate and alive all at the same time. I had been told to try and relax, everyone present was there to support me and all Shusos are a little nervous. I canâ€™t speak for all but in my case the ceremony was just beginning when I dropped my fan on the floor behind the platform. I turned on my seat, leaned over, picked up the fan and, trying to keep the silver side towards me, turned back around.Â  What I saw in that instant was not contempt or pity or embarrassment but love and compassion and support. The entire ceremony experience was one of beauty and one Iâ€™ll always remember. During the congratulations part I felt a little uncomfortable, only because having people say kind things to me or about me is something I struggle with. That said, I offer to all who are given the opportunity: Live and experience every minute.â€

We offer our congratulations to Mac, good thoughts as he now transitions into the world outside of prison, and wishes for the well-being of all members of the Buddhadharma Sangha.