Fire Monks: Zen Mind Meets Wildfire, by Colleen Morton Busch, is available June 26 in paperback and we invite you to join the author at one of many upcoming readings throughout the Bay Area.

“Fire Monks is a page-turner, a meditation on fire, wind, water, and earth, and a wonderfully detailed portrait of Tassajara practitioners as they come face to face with fire and themselves. A terrific and thoughtful book.” — Gretel Ehrlich, author of A Match to the Heart 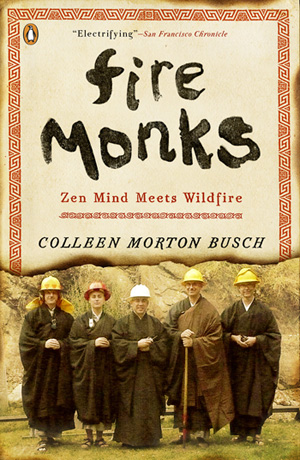 Additional celebratory events for the paperback release of Fire Monks are posted on Colleen Morton Busch’s website. In honor of the new edition, we sat down with Colleen to find out a little more about the evolution of the book, the process of writing it, the practicality of Zen and much more.

What has been happening with Fire Monks over the past year since publication?

It’s slowly making its way into wider audiences: Right now, Fire Monks is being translated into German. I never wanted it to be a book that just Zen students would read. I wanted people to read it who had no idea they’d be interested in Zen because I love this practice and feel strongly about its value and the kind of people who practice it and the places where it’s practiced. I also wanted people in the fire world to read it. This exposure is happening, bit by bit. My hope is, with the paperback, that it will happen more and more. People have appreciated seeing a balanced view of the decisions that had to be made [during the fire]; I tried to show the complexity of all the different perspectives.

You spoke at a wildland fire conference recently, in Seattle. What was that like?

These were professionals who were already concerned about the human relationship with fire. They were very warm and enthusiastic and grateful. What I heard from people I talked to was that the [firefighting] profession is going through a time of change, trying to figure out how to adapt as the fires are getting bigger and hotter, so I think they’re open to considering new models and hearing stories like Tassajara’s.

What do you have to say about the complexity of these kinds of situations?

I have a lot of admiration for the people down at Tassajara during the 2008 fire because they did try to maintain faithfulness to their perspective while being open to others. To get most people out during the final evacuation but to send a small crew back was emblematic of their ability to straddle perspectives. I hope to see more of this kind of open-mindedness going forward, with communities and emergency responders listening to each other, to find common ground.

And what do you think wider audiences, those already involved in Zen or fire, appreciate about the book and what it has to say about crisis management?

The practicality of it. It’s pretty simple. It’s not something hard to understand: “I can pay attention, I can not make a judgment about this situation, I can let it unfold, I can be open to possibility.” Readers can identify this within their own lives, whether or not it’s called Zen. It’s a practice that’s within reach. The fire was a profound metaphor for calamity, for something you can’t control, for something painful that you’d rather not be engaging with but you need to because there it is … I think people can understand that and relate it to their own lives.

How do you see the practical application of Zen in times of crisis?

I think about that a lot. When something’s making me uncomfortable or giving me difficulty, especially if it involves lots of moving parts and is not in my control, I think, “Ok, this is the fire.” It’s a helpful image for me. “What can I do here ? What actions can I take that would be beneficial and what do I need to let burn?”

Is there a part of the book that’s especially meaningful to you?

The scenes where [the monks] actually make the decision to first leave Tassajara and then come back were always the beating heart of the book for me. I was fascinated with that moment when they’re already up the road and ready to drive off to safety. I often pull from those scenes when I read from the book, because they’re so juicy to me. The afterword to the book also comes to mind. I wrote a very personal afterword about gratitude for the connections I had made, about my husband’s cancer diagnosis and how that was another fire. Actually, I wrote one draft of the afterword, scrapped it, and started over again. Seeing that revision, my editor said,  “You’ve proven what you want a reader to do by taking this story into your own life.”

You’ve experienced Tassajara in many ways; as a guest practitioner, as a place to research, and as a monk during a practice period. Any thoughts on what makes the place so special?

I think a lot of it has to do with where it is and what you have to go through to get there. It’s a journey. By the time you get there, you’ve already realized you’re not somewhere usual. I really think the physical environment in the middle of the wilderness supports settling in, sitting down, quieting your mind, opening your senses and noticing what’s around you. And then there are the years of the place being cared for by good-hearted Zen students: You feel that. It’s in the floorboards. It’s in every room with you. Fire Monks is available from Penguin Press for $16 or in the original cloth edition for $25.95. Colleen Morton Busch’s upcoming article in the August issue of Shambhala Sun will focus on San Francisco Zen Center’s 50th anniversary and the organization’s impact on American Buddhism.