It’s no secret. Haiku are not only one of the world’s briefest and most universal literary forms of the 21st centuryóhaiku are also pure Zen. Haiku are nuggets of creative, present-moment, natural awareness. In this special day we’ll map the basics, take a relaxed haiku walk (ginko) around the splendid grounds of Green Gulch, and share what we encounter, written and unwritten. 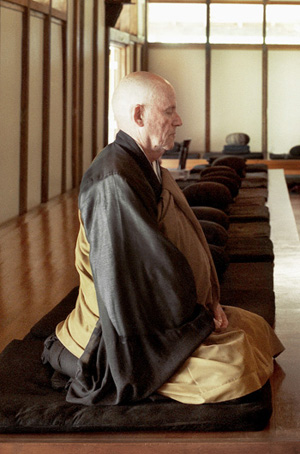 Daigan Lueck in the GGF zendo by Alison Bank

Daigan Lueck, a Zen Buddhist priest, poet, and painter, has been a long-time resident practitioner at all three SF Zen Center locations. He now lives at Green Gulch Farm with his wife, Arlene Lueck. He was ordained in 1990 by Mel Weitsman, who gave him the name Daigan (Great Vow) Tatsudo (To Accomplish). He was shuso at Tassajara in 1994 and received Dharma transmission from Zoketsu Norman Fischer in 1999.

Gary Gach, a Buddhist teacher, writer, and poet, is recipient of a number of fellowships and grants, and is a speaker at keynotes, workshops, and panels. He teaches Buddhism at Stanford Continued Studies. His Public Personal Home Page includes links that cover his many interests, including the haiku corner on the Tricycle web site.