May 9, 2012
Connecting the Dots: An interview with Shinji Eshima
Arts & Culture | Zen Practice 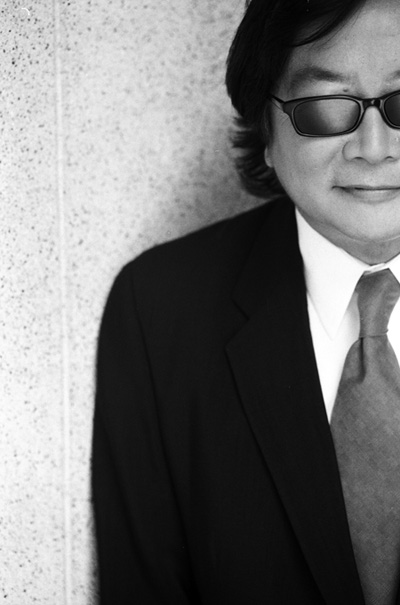 Shinji Eshima, bassist and composer, is the guiding spirit behind the June 4 concert called Resounding Compassion, in celebration of Zen Center’s 50th anniversary. I first met Shinji in 2011, when I joined a group of Zen students to chant at performances of the ballet RAkU for which he composed the music.

Shinji agreed to an interview for Sangha News Weekly, in which we discussed his Buddhist family, the sources and nature of his inspiration as a composer, and his deep commitment to peace.

Tova: You once mentioned that your grandmother was a Buddhist. Can you tell me about the role of Buddhism in your life?

Shinji: I was raised in a Buddhist family. My grandparents came to the United States as Buddhist missionaries. They founded a church and a children’s center for the children of farmers in Guadalupe, near Santa Barbara. They later moved to Berkeley, where my grandmother, Shinobu Matsuura, started the Berkeley Buddhist Temple and was the first ordained female Buddhist minister. My grandmother and my uncle Kanmon Imamura, founded the Buddhist Study Center in Berkeley, where Alan Watts, Gary Snyder and Jack Kerouac were students. Because my grandfather was a minister [and thus a community leader] he was interned in Tule Lake during World War II and separated from his wife and children, who were in another internment camp. He died soon after the war. Two of my uncles were Bishops in the Buddhist Church, one in Hawaii and the other in Canada.

Tova: What was your relationship with your grandmother like?

Shinji: I grew up in Berkeley. My grandmother taught Japanese and calligraphy. I remember hearing temple bells. My grandmother had an obutsudan (altar) and would offer rice and chant. I helped her make pickles.

Tova: When did music become part of your life?

Shinji: My mother was born in Hiroshima and came to the United States with her parents when she was three. She played piano and encouraged me to study the piano. I won a piano competition as a kid but had a memory lapse in a performance which was very embarrassing. I switched to playing bass in high school, partly because I wouldn’t have to memorize as many notes and because a bass player was needed for the school orchestra. I wrote an essay about my “mistake” and how it turned out to be beneficial which got me into Stanford.  After I graduated I followed a girlfriend to New York and ended up at Juilliard.

Tova: What about composing?

Shinji: I’ve always been composing because it makes me happy, first on the piano when I was a kid. My first major success was the music I composed last year for the ballet RAkU. This music was based on a piece I wrote for the 50th anniversary of the bombings of Hiroshima and Nagasaki which was performed in Grace Cathedral in 1995.

Tova: You compose so beautifully for each of the instruments in the orchestra in RAkU. How did you learn to do that?

Shinji: I’ve played in orchestras for 32 years. My teachers are everyone I’m surrounded by.  I’ve played all the greatest music in the world. That helps me when I’m composing.

Tova: Where does your inspiration for composing come from?

Shinji: When I play the bass I feel the vibrations of it, feel the music. It’s like the voice deep inside you when you chant. When you connect with the resonance, that’s inspiration. Inspiration connects you with something that’s true and something beautiful. This can be expressed by any modality – music, poetry, dance. Things can get in the way – distractions, desires – of realizing what’s true, but it’s there. When you create music or art and others appreciate it, it’s the same experience. It “rings true.” It’s a language that expresses the meaning of life. The best word is compassion. When it makes you feel so open, it’s vulnerability and strength at the same time. Then you are open to another person’s feelings. So ultimately it’s love.

Tova: The same kind of opening can happen in Zen mediation; and it can create a spaciousness that allows us to connect with others, including those we might initially dislike or disagree with.

Tova: An orchestra is like that as well. It takes all the instruments playing together to bring a symphony to life.

Shinji: And an opera can involve 500 people – the orchestra, chorus, soloists, people working backstage… And then there’s the audience, and bowing and applause. When the performers bow at the end of a piece they are bowing to the inner goodness of the people who appreciate their music. It goes both ways.

Tova: At Zen Center we bow to one another a lot, a way of expressing respect and connection. To return to the theme of the anniversary concert, Resounding Compassion, can you tell me why you were drawn to having a bell made by Al Farrow for this event?

Shinji: Al Farrow has made sculptures out of bullets and artillery shells for over 40 years. I think he’s the Picasso of our time, a parallel to “Guernica.” Bullets are sometimes used in the name of religion. Al Farrow creates sculptures of cathedrals, synagogues and mosques out of bullets. I remember a haiku about a bell clearing the air. I thought there should be a bell in this concert, a bell made of bullets to give the bullets a new purpose. We don’t have to be violent; everyone knows it. Compassion is more powerful than hatred.

Tova: During World War II Suzuki Roshi had to give the temple bells of Rinso-in, his temple in Japan, to the Japanese navy to be melted down for ship propellers. I’ve read that this was heart-breaking for him; he especially loved the big old bell and thought of it as part of the soul of Rinso-in.

Shinji: And now we are doing the opposite, turning weapons into bells.