Just before guest season opened, 59 SFZC alumni gathered to participate in a four-day retreat.  The schedule included morning zazen and service with the resident community and free time for hiking, yoga, bathing and pure enjoyment of Tassajara.

Alumni also took advantage of the opportunity for talking, reminiscing and performing for one another at a lively skit night.  Although many participants did not coincide during their time as Zen Center students, through a common love of practice and Tassajara, they were soon like old friends.

Their time at Tassajara closed with a ceremony at the Suzuki Roshi memorial and included a procession through the new Torii/Gate, which was built during this year’s work period. Torii are commonly associated with Shinto shrines in Japan, marking the entry to sacred space, but also have been adopted by Buddhist temples. Our new Tassajara Torii/Gate, which marks the way to the site of Suzuki Roshi’s ashes, is a feature that, according to SFZC Abbot Myogen Steve Stücky, “accents the transition and deepens the experience of taking the path.”

After the procession through the gate up the memorial, Abbot Steve led a ceremony in honor of Suzuki Roshi, during which he spoke a few words of gratitude. They appear in their entirety below. For more photos of the weekend, visit the Alumni Facebook page. 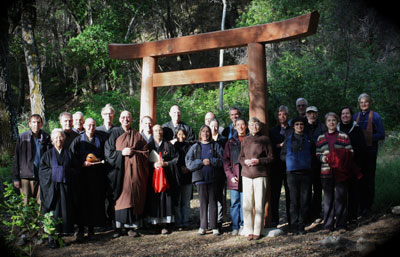 “What does it mean to Transmit the Light? to be a “Vessel of the Dharma?”
Shogaku Shunryu Suzuki, Daiosho!!! You know that the dharma needs a human form.
Your aspiration to truly live the Great Way arose early as a boy in Japan,
With a vow to leave home and train as an apprentice monk at age twelve.
Your path of practice and study opened you to deep insights – dharma understanding that
Was challenged and matured by temple responsibilities as a young priest,
And tempered by family needs, by tragic loss, by war.
You accepted the sometimes harsh realities of life
as opportunities to care for those around you
and to study and prepare for unknown dharma gates –
a potential future mission for dharma teaching in another culture.

When causes and conditions ripened, you were ready,
you responded with courage, leaving home again,
this time flying from your native land, friends, and family
Arriving in San Francisco to serve as priest tending the needs of the traditional
Japanese-American congregation of the Soto Zen Temple, Sokoji.

And here, in the spring of 1959 you resolved to turn over a new leaf.
You responded to Americans who asked about Zen by inviting them
to come and taste the dharma – to the actual experience of zen practice.
Saying: “I sit zazen at 5:45 each morning. Please join me”

Through your quiet dedicated effort, your willingness to meet whomever appeared;
You planted the flag of dharma in American soil.
A new sangha emerged and 50 years ago, San Francisco Zen Center was born.
A few years later, you founded the first Zen Monastery in the West right here, in the mountains of the Ventana Wilderness at Tassajara, where we now gather to honor your life and your legacy.

In December 1971, your twelve years here ended. In that precious time
You offered the precepts to many students, you ordained priests,
And trained a successor. You created a new vernacular of Zen teachings
Some of which are now a modern classic of zen: the book
Zen Mind, Beginner’s Mind. You established Beginner’s Mind Temple in San Francisco and Zen Mind Temple here at Tassajara.

In your quiet humble way, you brought us what is most essential:
confidence that the mind and heart of Buddha dwell right here in us,
in the practice of zazen, in our dharma study, in our sangha practice together.
In giving yourself to us, you gave us the freedom to be ourselves —
In the truest deepest sense. This is the transmission of Light!
This is what it means to be a “Vessel of the Dharma”!
The benefit of your generosity to us cannot be measured–
And our gratitude knows no bounds.