“Thank you for showing us enlightenment in action.”
— Tenshin Reb Anderson, in his congratulatory remarks to the newly installed Abbot at Houston Zen Center, April 7, 2012 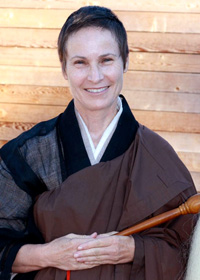 The Mountain Seat Ceremony for Setsuan Konjin (Snow Hut / Establish Love) Gaelyn Godwin was a wonderful example of the strength of the Suzuki Roshi Soto Zen lineage, and the flexibility of this practice as it finds its way into the hearts, minds, and bodies of people in the West (and Houston is almost as far “west” as it can go!). Houston Zen Center also received its official designation as a Soto Zen temple with the name Auspicious Cloud Temple.

The sangha of Houston Zen Center/Auspicious Cloud Temple, where Gaelyn has been the Abiding Teacher since 2003, enthusiastically extended her the invitation to become their Abbot. Their work, planning, love and devotion were evident in all the events over the weekend of the Mountain Seat Ceremony. Many people from San Francisco Zen Center, among them Mel Weitsman and Reb Anderson, helped to advise the leaders of Houston’s sangha on the particulars. Hoitsu Suzuki Roshi and his son Shungo Suzuki (Suzuki Roshi’s grandson) came from Japan and imparted their delightful presence and expertise.

The sounds of the ceremony were punctuated by skilled drumming on a gigantic taiko drum and resonant sounds from the densho bell (fashioned from the head of a military missile). The evening of the rehearsal dinner included a mariachi band; their music brought several Zen Masters to their feet to dance!

It is wonderful to be alive to see another event exemplifying the blossoming of Zen in the West.