Our beloved Rozy died at Green Gulch on Thursday morning, March 29, 2012. She was 17½ years old. Named after actress Rosalind Russell, Rozy (a Jack Russell Terrier) was born on October 20, 1994. 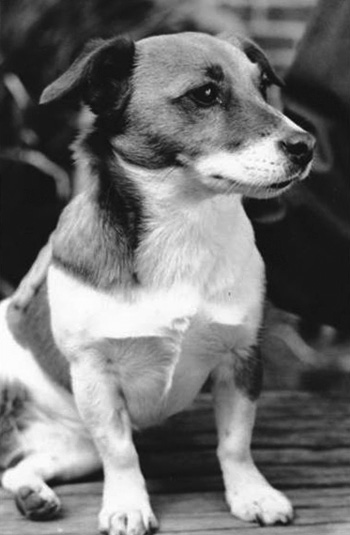 Her first “owner” was a hair stylist named Ronnie, a friend of Rusa. As a puppy, Rozy napped on Rusa’s lap under a barber’s cape while Ronnie styled Rusa’s hair. Rozy’s affection for Rusa opened an immeasurable Dharma gate, because when Ronnie died suddenly in 1998, Rozy came to live at Green Gulch Farm. In her fourteen years of residency, she added a twinkle and a flair to the life of the sangha. One moment she might be seen racing down the farm road with her ears flat against her head, likely headed to the compost yard to eat something delicious. The next moment she might be discovered unexpectedly in a resident’s bed, burrowed deeply into the blankets. Late in her years, Rozy was diligent in following the daily morning schedule at Green Gulch, enthusiastically accompanying Tenshin Roshi to his meeting room for dokusan. She would usually sleep quietly behind him, but was known to sometimes burst forth from his sleeve. She only came into the zendo when invited for formal ceremonies, but routinely waited at the threshold for her sangha friends to emerge. As do all long-term residents, Rozy spent time at Tassajara and was frequently requested by bag lunch attendants during the guest season to guard the food from squirrels and bluejays. She took her work very seriously. In her free time she loved to herd swimmers, fetch pine cones, and hunt mice. Rozy was very intelligent … also kind of human. Her challenges in practice had mainly to do with the unpredictability of children, sudden applause at work circle, and the tennis balls that were attached to the bottom of Sabrina’s walker. Although Rozy attended many classes and lectures in the Wheelwright Center over the years, she was eventually restricted from attending such events following a biting incident at Mitsu Suzuki (Okusan) Sensei’s 88th birthday celebration. Rozy continued to enjoy the smells and paths of Green Gulch even as her pace slowed this past year. Her friends returned her loyalty and meandered beside her right up to the end of her life. Her companions were present and chanting for her when she died. Her body was encircled in a garland of petals and left undisturbed for three days. We celebrate her life and we feel her absence. Thank you to all of you who loved her. May all beings be so well nurtured.