After recently serving as assistant to former abbot Ryushin Paul Haller, Myozen Joan Amaral is moving to Marblehead, Massachusetts, at the beginning of March to establish a Zen Center there. 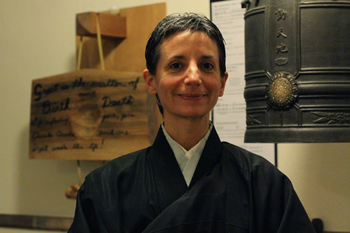 In an article in the online Marblehead Reporter, reporter David Kellogg described Joan’s meeting in Marblehead with Susan Indresano. Joan, originally from New Hampshire, was visiting a high school friend when Susan saw her walking kinhin as a “grounding” practice. From that intriguing conversation, Susan arranged a meeting with several people in the area who she thought would be interested in a sitting group. Joan was invited to return to Marblehead to lead two well-attended introductory classes for those interested in Zen meditation. And things grew from there.

While working as Paul’s assistant, Joan also offered meditation instruction at the women’s jail, facilitated Zen Center’s Dharma in español group, and taught classes and workshops at City Center and Tassajara. She has also helped with many of the events at Zen Center, as well as offering her enthusiastic kindness and support to many people, residents and non-residents. We all offer her our best wishes and gratitude, as well as our sincere hope for her success and the success of Marblehead Zen Center.